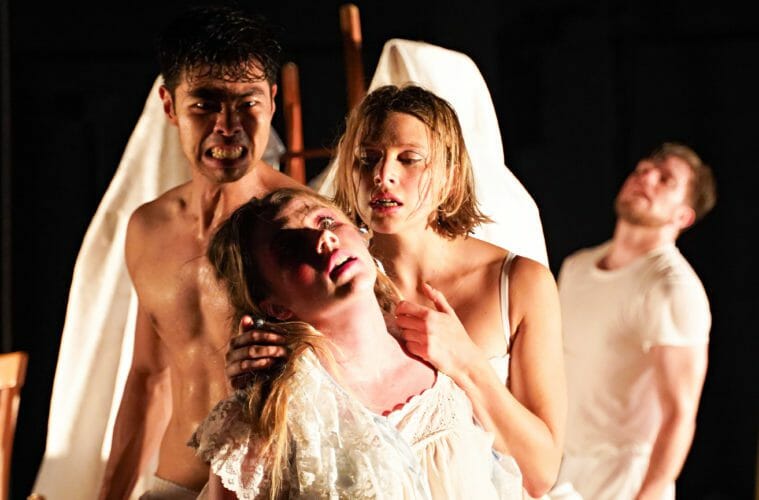 The party never stops in The Exterminating Angel. But instead of a charmed life being a carefree dream, it can devolve into a slow-building nightmare.

That’s one of the many messages to derive from Vernal & Sere Theatre‘s cool, challenging adaptation of the 1962 Luis Buñuel film, onstage at the Windmill Arts Center in East Point through October 24. And it’s the only straightforward message in the show, really. The other lessons are harder to discern, for this is experimental, avant-garde theater based upon surrealist cinema — incorporating songs, ballet, a 13-minute nap, multimedia, urination, suicide, sex, a man simulating birth and people dressed as sheep and a bear.

This show is not going to be everyone’s cup of tea. If the pandemic has you in the mood for lighter fare, simpler stories with happier endings can be found elsewhere. 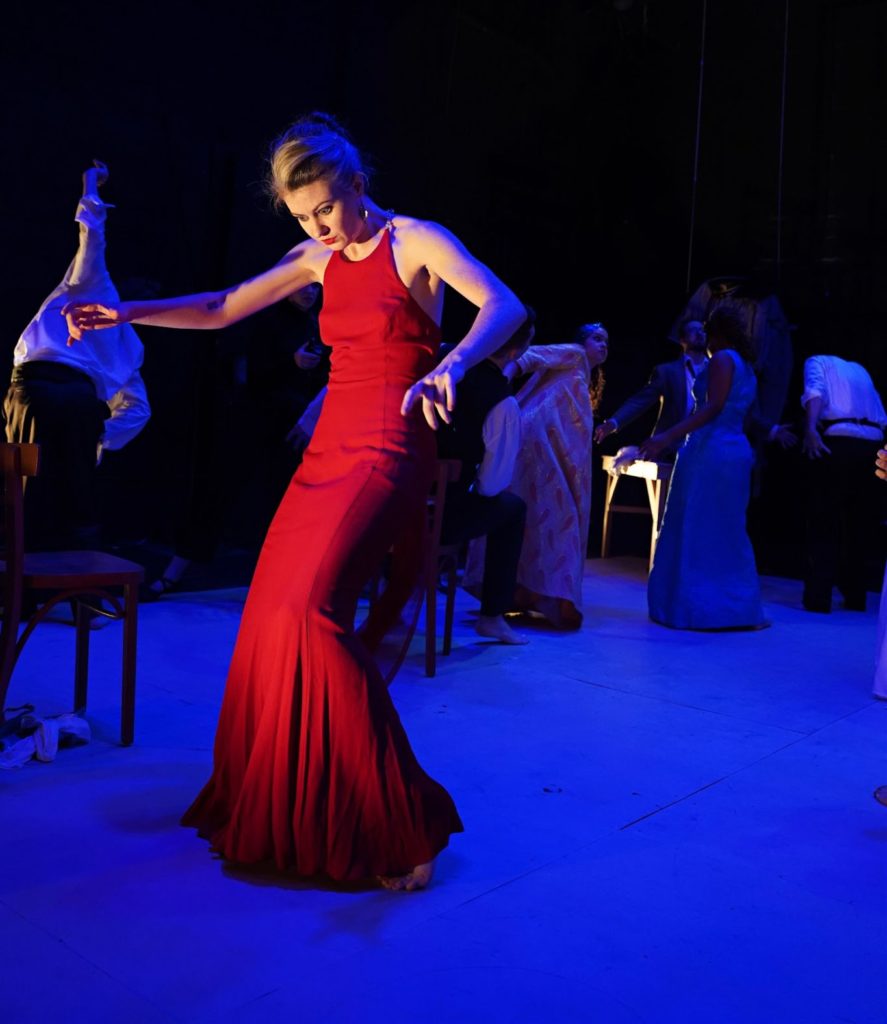 But, damn, if you’re game, The Exterminating Angel is fascinating. It’s weird, topical and visually stunning. And these performers, writers, designers and technicians are working hard to do something complicated and ambitious. Playwright Sawyer Estes has created an atmosphere of class divides, social anxiety and madness as uncomfortable as Marat/Sade.

It’s a hell of a way to remind returning patrons of all that theater can do. And if it’s not entirely successful, plenty of it works.

The plot of The Exterminating Angel is deceptively simple. A group of highbrow aristocrats attend a dinner party at a nobleman’s house. Most of the servants flee before the guests arrive, except for the head butler. After dinner, though they talk of going home and make moves toward the door, the guests find themselves unable to leave the room.

At first, no one comments upon the predicament. They’re too busy demanding more food, flirting, gossiping and applauding each other in exaggerated gestures, as though they’re being jerked by marionette strings. But, as the problem stretches from hours into days and weeks, things turn barbaric and scary. By Act Two, the upper-class characters have stripped themselves of airs, literally and figuratively, and some are dead and rotting in the corner.

Vernal & Sere‘s presentation of the show, directed by Estes and Erin O’Connor, is a marvel. When the audience enters, the play is already underway, even though the house lights remain up. Servants scamper in an elaborate dance, setting the table while shouting at one another that they must leave.

When the party arrives to kick off the first act, the moment is stunning. Bathed in red light, the cast members pause and pirouette in their finest clothes in slow motion, announcing themselves until they fill the four corners of the stage. The movement and choreography, designed by O’Connor, Erin Boswell and Terry Slade, has been elaborately rehearsed to coincide with the dialogue, which often overlaps and repeats.

The aristocratic characters are stuck on a loop frequently in the show, beginning with them handing their hats and coats to servants who aren’t there to receive them. So they act out the conversation over again. And the message starts to emerge that, without a lower class to help them, the upper class do not know who they are. 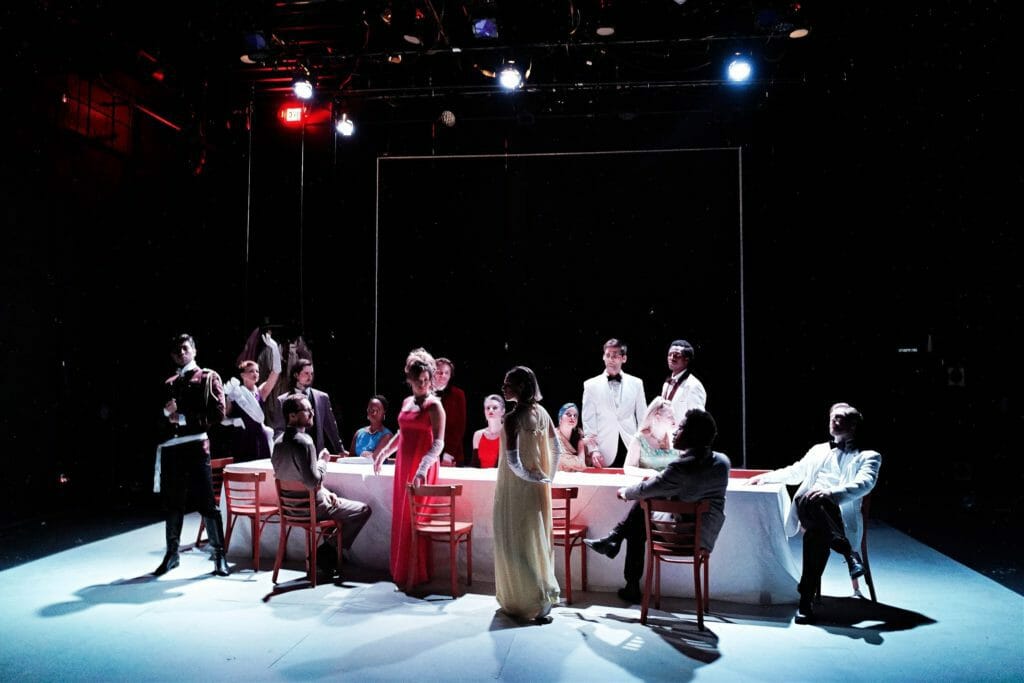 Surreal happens: Members of the large ensemble pull up seats in the avant-garde theater work based upon Luis Buñuel’s film.

Every cast member, at some point, is given something intensely physical and emotional to do. Dialogue overlaps, roles start to blur. What the characters represent as a group matters more than their individual struggles, though they clash over politics and religion. Often, the audience is subjected to madness, its attention drawn in multiple directions.

Playing the terrified servant Julian, Patrick Conley crosses a room holding a tray while moving his legs and feet one small gesture at a time, as though on a tightrope, while a cameraperson shoots close-up video of his face. Joe Sykes gives his party host a lot of bluster and pomp, for he’s the last to acknowledge that anything is wrong, even when his wife (Heather Rule) is having an affair under the table with an Army colonel (Joseph Yang). Barrett Doyle and Irene Polk play a couple so consumed with lust that they don’t care about the danger they’re in. A doctor (Joseph Leitess) must care for sick and dying people onstage, including Chris Schulz as a man in existential crisis. Brice Heller talks himself through a dream of giving birth as the rest of the cast carries him around the stage. Another couple, played by Mustapha Slack and Erin Boswell, have a sweeter romance, offset from the rest of the nightmare.

Instead of an intermission, the 21 actors do not leave the stage because their characters cannot leave the room, but the house lights come up nonetheless. The effect on the audience during this moment is hilariously jarring, for even they can’t tell if it’s alright to move, stand up or leave the room themselves. (The program even includes an inserted note, telling people that they can stretch their legs if they want.)

The parts that don’t work, unfortunately, are the inclusion of the sheep and the bear, who are portrayed by people in costumes that are only vaguely animal. The sheep and the bear perform multiple songs during interludes in the action, but it isn’t entirely made clear to the audience who these characters are supposed to be. When the aristocracy begin to rip the sheep apart, it plays as just more human violence. Without prior knowledge of the Buñuel film, this may not make sense.

The ending of the show works, though, for it alludes to the situation we’ve all been living through since March 2020. When everything you do is suddenly taken from you, when you’re not even safe to leave your house, when you want to go outside but just can’t, your place in the world is uncertain, and it can drive you slowly mad.