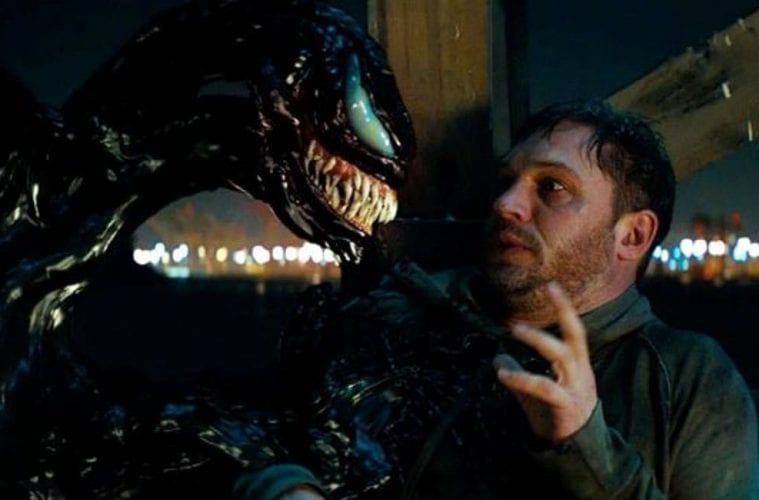 Watching Tom Hardy soak in the saltwater aquarium of a posh San Francisco restaurant, munching on a live lobster, one thought came to me. It’s the same thought I had seeing Michelle Williams waft through scenes in a tartan schoolgirl skirt, playing a character defined by her feelings for two different men. What do Oscar-nominated actors think about when they know they’re stuck in a mediocre-to-bad comic book flick?

Sure, thinking about all those zeroes at the end of their paychecks must be a nice distraction. And for any actor still determined to stay on the big screen, action films are the bulk of what makes it to the multiplex. The problem with Venom, though, is that it feels stuck somewhere in the early 2000s. It’s as if the filmmakers haven’t seen 2008’s Iron Man or any of the 20-odd Marvel-based movies since then, and don’t realize comic book movies can be filled with wit, narrative surprises and characters that pop. Venom feels like a test run or a first draft.

It’s not. But Venom, the character, doesn’t have a good track record onscreen. Topher Grace’s Eddie Brock/Venom was one of many under-baked elements that sabotaged Spiderman 3, forcing two new reboots with two new Peter Parkers (Andrew Garfield, Tom Holland). Venom was left by the wayside for the 11 years since. But even the smallest, strangest Marvel character has to be tested for monetizing potential, so Sony has delivered another — yawn — origin story, partly shot in Atlanta.

Hardy plays Eddie this time, mumblin’ like a Jersey palooka and living in San Francisco (though the movie was filmed in and around Atlanta, and features some Downtown landmarks) with his attorney fiancée, Anne (Williams). An investigative TV reporter, the not-so-smart Eddie opens one of Anne’s emails about a case she’s working, resulting eventually in both of them losing their jobs.

The case involves the Life Foundation, a massive science facility center run by the inevitable bent, power-mad doctor (in this version, Riz Ahmed as Carlton Drake). If you’ve seen any comic book movie, you know the doctor will prove to be evil, with godlike delusions. In the big, CG-sloppy finale, he will fight our hero using the hero’s own superpowers against him (just as in Iron Man, just as in 2003’s Hulk, just as in a dozen other flicks I’m forgetting). Venom is a reminder of how threadbare these origin stories are. And, in the case of the new movie, how boring.

For the record, Drake and the Life Foundation are supposedly trying to find a cure for cancer. In actuality, Drake has sent a recon rocket into space and brought back a slew of alien parasites known as Symbiotes. Drake wants to fuse Symbiotes with humans to create a biological super-organism able to live both on Earth and in outer space. Instead, his experiments mainly kill a bunch of people.

That, of course, is until Eddie merges with one shape-shifting Symbiote known as Venom, and man and monster share a body that’s suddenly capable of killing entire SQUAD teams and berserking throughout the city.

Here’s the big question of the movie and the composite character of Eddie/Venom: Is it a villain? Is it a hero? Is it an all-powerful, squiddy-tentacled thing that can survive in any human host (a little girl, a fluffy lap dog), yet also be vulnerable when the poorly written script calls for it? That unresolved question had me more engaged than anything else in the muddy FX blur that constitutes the bulk of the movie.

The director is Ruben Fleischer, who — in what constitutes the Hollywood way of advancement these days — was handed this action extravaganza, even though he was best known for the small-budget comedy Zombieland and a lot of TV episodes. In the same way, director James Gunn had only shot TV and an uneven indie flick called Super — then he was given the reigns for Guardians of the Galaxy and knocked it out of the park. So sometimes it works. Sometimes, as with Venom, it doesn’t.

At the very end of the movie, the question of what-must-these-poor-actors-be-thinking came back to me. After both Eddie and Anne have spent a night fused with Venom, and each has killed countless men, and each has eaten at least one human head apiece, and Eddie has hitched a ride on the side of a rocket blasting into space and blown it up, we find our estranged-but-slightly-amorous couple sitting on a stoop, sipping an early morning coffee.

“So,” Anne says to Eddie, as blithely as if she’s asking if his joe is too hot, “how are you feeling after all that?”

Too bad the line isn’t intended to be as weird and off-key as it actually is. Like the character of Venom itself, the movie doesn’t seem to know what the hell it’s supposed to be. But at least by my count it seemed to run not much longer than an hour-and-a-half. Still too long.