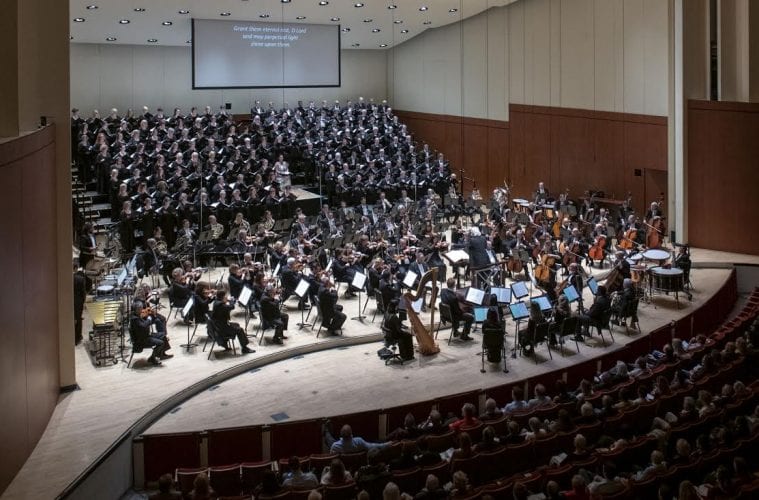 Under Donald Runnicles, the ASO and Chorus take flight on “War Requiem”

The roofless ruins of the old St. Michael’s Cathedral in Coventry, England, serve as a reminder of both the devastation of war and the will of humans to persist, survive and ultimately grow and flourish in its wake. Constructed during the late 14th and early 15th centuries, St. Michael’s Church became one of the largest Anglican parish churches in England by the time it was elevated to cathedral status in 1918.

Just 22 years later, St. Michael’s Cathedral was bombed almost to oblivion by the German Luftwaffe during the Coventry Blitz of 1940. In 1950, a competition was held seeking an architect for a new cathedral. And 10 years after that, British composer Benjamin Britten was commissioned to compose a new work on the consecration of the new St. Michael’s Cathedral.

The result was his monumental “War Requiem,” combining the traditional Latin texts of the liturgical Missa pro defunctis (Mass for the Dead) with English texts drawn from the wartime poetry of Wilfred Owen, a British poet and Army officer who died in combat only one week before the armistice that ended World War I. The resulting 85-minute “War Requiem” powerfully expresses Britten’s disdain for both world wars. It was premiered on May 30, 1962 in the new cathedral.

ASO principal guest conductor Donald Runnicles made his first appearance of the orchestra’s 2018–19 season to lead the massive forces assembled for Thursday night’s performance of the “War Requiem” at Symphony Hall by the Atlanta Symphony Orchestra and Chorus, three guest soloists and the Gwinnett Young Singers. The performance will be reprised this Saturday at Symphony Hall.

It’s a work for which the ASO has a long performance legacy. Robert Shaw led the first ASO performances of “War Requiem” in 1968. In 1990, Telarc released a new recording with Shaw conducting that won the ASO a pair of Grammy Awards for best choral performance and best engineered recording. The most recent performance took place in April 2014, with Robert Spano conducting.

The staging of “War Requiem” commemorates the 100th anniversary of the end of World War I. The ASO was divided into two orchestras: the large main orchestra in their usual position, with the ASO Chorus in risers behind them, plus a small chamber orchestra seated on the slightly lowered apron at the front of the stage, facing away from the audience toward Runnicles’ back.

Soprano soloist Evelina Dobračeva sang from a platform in the middle of the chorus at the back of the stage, while the two male vocal soloists, tenor Thomas Cooley and baritone Russell Braun, took positions on either side of Runnicles’ podium. The Gwinnett Young Singers literally sang from the rafters, positioned inside the control booth at the upper rear of the hall, above the balcony seats. That’s a full-fledged, more complex spatial deployment of onstage forces than in the 2014 performance with Spano. Dobračeva also performed in that concert, when she was positioned at the front of the stage with the other soloists, but this time her powerful, well-rounded voice did not benefit from being placed at the back of the orchestra on a platform amid the chorus. Technically, her part has more direct connection to the chorus in text and music than it does to the two male soloists. She did not, however, get lost in the shuffle, projecting well through the texture from that position as could be expected.

Thomas Cooley shone especially well in his part, exhibiting a range of emotions demanded by Owen’s text, his bright tenor voice capturing poignant lyricism, pathos or declamatory characteristic as needed. Baritone Russell Braun, on the other side of the podium, was well matched with Cooley — an excellent choice — with comparable positive musical attributes whether singing solo or in duet with Cooley.

For their part, Gwinnett Young Singers sounded ethereal, perhaps too much so, from their high perch behind the control booth’s open windows, accompanied only by a lightweight “positive organ” part that did not obscure them, but one really had to listen closely and attentively to hear their distant sound.

The ASO Chorus performed well, sensitively, but with few dynamic pinnacles. Perhaps it was Runnicles’ approach to the work, which did not seem to have the overall level of energy and cutting edge as in Shaw’s recordings from two decades before. Some of that sound was compensated for through the physical separation of having two orchestras, with the audible spatial interest that invoked, and the often complex working of the ASO brass and contrapuntal fanfares were an exciting, energizing aspect of the performance.

The “War Requiem” is not the kind of audience-grabbing operatic drama like that of the slightly longer Verdi “Requiem”. Instead it is a more brooding, somber essay on the devastation of war on the here and now than it is one of resolution in the hereafter. That’s largely thanks to the more intimately scored tropes drawn from Owen’s poetry that comment or reflect upon themes in the liturgical rites proper — whether the wrathful anxieties of the “Dies irae” or the hopes of absolution in “Libera me.”

When all is said and done, when the last quiet notes have faded away and there is that long, pregnant pause while the audience takes in the sacred silence before applauding, one realizes that Britten’s masterpiece remains substantially humanitarian at its core.