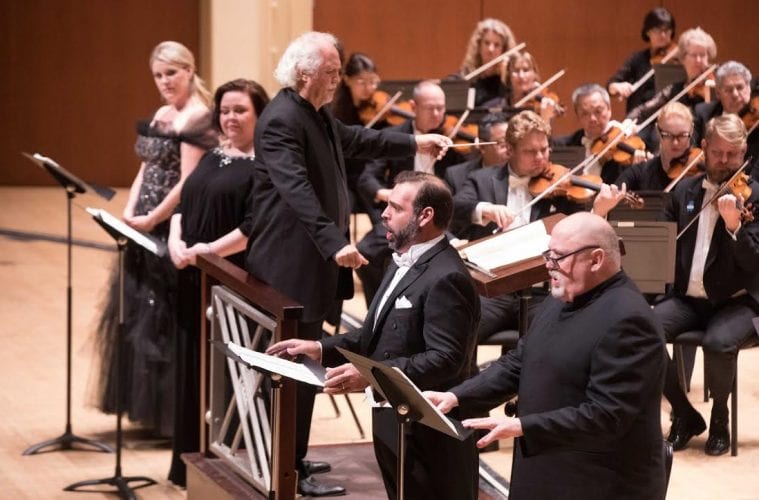 The ASO has a long and fruitful history of performing Verdi’s “Requiem.” The first time was in 1954 with founding music director Henry Sopkin on the podium. Under the baton of Robert Shaw, the ASO performed it in 1969, 1977, 1980 and 1987, then recorded it as a Telarc double CD that received three Grammy Awards in 1989. In the three most recent instances, Robert Spano led the ASO forces in 2006, at both Symphony Hall and on tour at Carnegie Hall, then again in 2010 and 2015.

This week, we finally get to hear Runnicles work his magic with it. As heard on Thursday, the result was nothing short of magnificent. The opening, with muted strings and sotto voce chorus, was ethereally gossamer, emerging from the near edge of inaudible in a prayer for the dead to “Grant them eternal rest, O Lord, and let perpetual light shine upon them,” suddenly followed by a boldly contrasting fugal hymn, “You are praised, O God, in Zion.” It then returned to the original hushed, prayerful mood before dovetailing into a more animated “Kyrie eleison” (“Lord, have mercy”). That introduced the four soloists before the chorus reentered in detailed contrapuntal interplay with soloists and orchestra until the movement’s long, final chords of supplication at last died away to nothing.

One of the genuinely great choral-orchestral works of classical repertoire, Verdi’s setting of the “Messa da Requiem,” the Catholic funeral mass, is not intended for liturgical use in the church but is thoroughly a concert work in context and yet essentially operatic in manner. Verdi was not particularly fond of organized religion, the clergy in particular, at one point cautioning a family member to “stay away from priests” — a sentiment that also shows up in a couple of his operas. At the same time, the “Requiem” is a masterpiece of sacred music and personal religious expression, full of passion, emotional turbulence and prayerful reflection.

Nowhere is Verdi’s “Requiem” more flagrantly dramatic, in that operatic sense, than in the agitated “Dies Irae” (“Day of Wrath”) that follows, introduced by four short fortissimo chords in full orchestra, replete with fearfully distraught pleas of squirming penitents amid the swooping, flurried strings and woodwinds, brazen brass, tympani and an ominous, fourth-beat double-mallet pounding of the bass drum that underscores the words “Solvet saeclum in favilla” (“Earth dissolved into ashes”). Hot work, one might say, avoiding eternal damnation at the Day of Judgment.

The superb quartet of soloists seemed well-matched to the occasion and each other, the pairings of male voices and of female voices especially so. Tenor Dimitri Pittas and bass Peter Rose each possessed a good cutting edge when the music called for it, but were able to opt for a more rounded coloring when needed. Soprano Erin Wall and mezzo-soprano Jamie Barton likewise proved to have advantageously compatible voices — witness their duet, “Recordare Jesu pie” (“Remember, blessed Jesus”).

Barton, a native of Rome, a Shorter College grad and rising star in the operatic world, demonstrated her ability to tackle genuine contralto repertoire with vocal power and warmth last November with her ASO performance of Edward Elgar’s “Sea Pictures,” but also has the same vocal capacity on the upper end of the mezzo range, as evidenced Thursday.

Wall, with her lithely radiant soprano voice, demonstrated that she has the acumen for full control of dynamic range in her upper register without faltering. The critical test comes in the final movement, “Libera me, Domine” (“Free me, Lord”), at a point where the soprano is obliged to sing an octave leap to high B-flat above the unaccompanied chorus, all marked at a treacherously soft “pppp” (pianissississimo, for those who really want to know the full Italian term). I have heard way too many soprano soloists butcher this moment, but Wall rendered it splendidly, with clarity and just enough volume to be present in balance above the translucently quiet chords of the ASO Chorus.

From that point, the Chorus had another chance at showing off its contrapuntal abilities in a fugue on the same “Libera me” text, with Wall having some more solo opportunity before the chorus and orchestra came to a climactic la tutta forza before beginning to dial down the volume as the final bars approached.

Although spanning a total of 85 minutes in seven movements without intermission, the performance did not feel overly long or wearing. It instead left the listener emotionally invigorated and even somewhat spiritually hopeful as its concluding statement of the words “libera me,” on a subdued C major chord, dissolved into thin air.