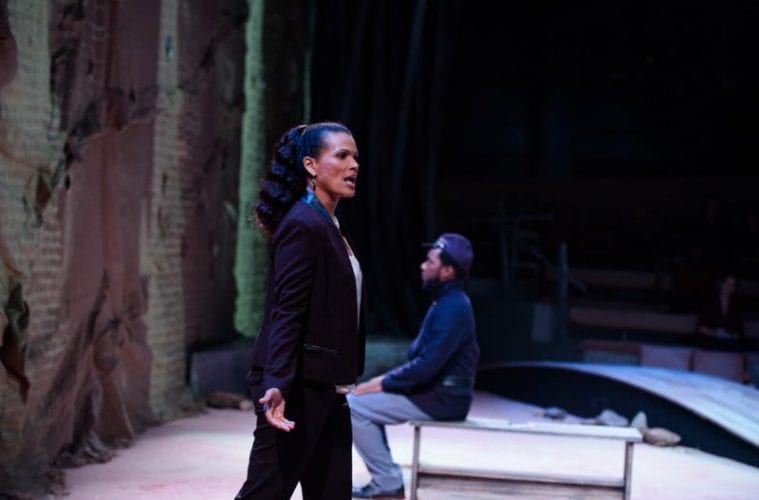 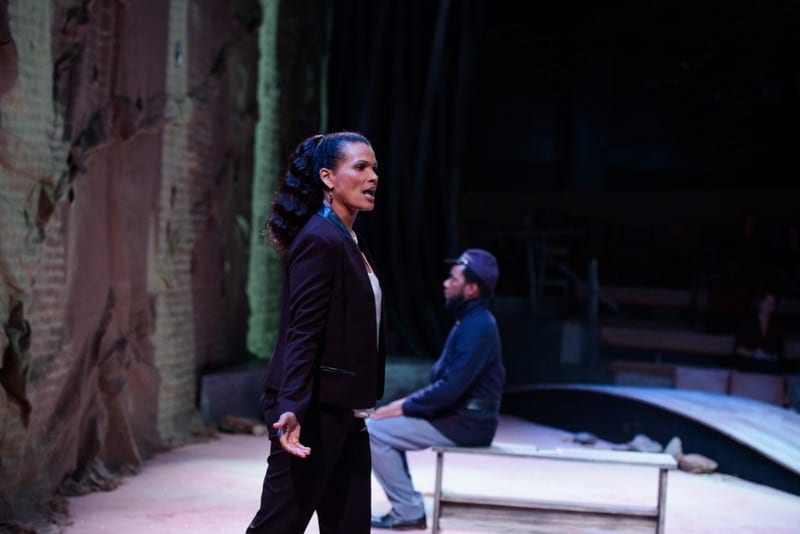 Natasha Trethewey’s 2006 Pulitzer Prize–winning collection Native Guard is inarguably great poetry, but can it make great theater? The world premiere production of Native Guard at the Alliance Theatre’s Hertz Stage through October 19 will likely divide audiences as to the answer. Some will feel that the poems have arrived at their rightful place, that great poetry is meant to be spoken aloud, to be shared and discussed communally. Others (I fall into this camp) will suspect that as smartly realized as the performance is, there’s something about the poems — their personal, meditative, contemplative, internal nature — that resists being brought to the stage. Although Native Guard has received a sleek, beautiful and thoughtful production at the Alliance, the show ultimately falls somewhat short as drama.

The poems in Trethewey’s Native Guard tell many interconnected stories. There’s the story of Trethewey’s deceased mother, who was married to a white man and lived in Mississippi (illegal in the state at the time of their marriage). There’s the story of Trethewey’s childhood growing up in the disparaged household, in an oft-disparaged state. There are recollections and descriptions of Trethewey visiting Mississippi’s Civil War monuments. And finally, the poet takes on the imagined voice of a 19th-century soldier in the historic Native Guard, a Union regiment of African American soldiers during the Civil War who were assigned to guard Confederate prisoners on Ship Island off the coast of Mississippi.

Collectively, the poems examine how the personal can intersect with the grand sweep of history, how writing itself can be an act of resistance against personal and historical erasure.

The poems in Native Guard are performed here by two actors: January LaVoy, who plays a Trethewey-like figure performing the first-person narrative poems written from Trethewey’s point of view, and Thomas Neal Antwon Ghant, who performs primarily as the Native Guard soldier.

What’s strong in the book is strong in the play — the exploration of grief, loss and memory that’s at once intensely personal and freighted with the enormous weight of a nation’s troubled history. Interwoven with the spoken word segments are fantastic blues songs performed live by vocalist Nicole Banks Long (longtime Atlanta theater-goers may remember Long from her standout performance as Mary Magdalene in the Alliance’s production of Jesus Christ Superstar in 2009).

The set by Anne Patterson — featuring a sand floor, vintage chairs for the audience, an abstract bridge, projections and a pool of water — is so apt in its sleek, contemporary design and meditative atmosphere, it could almost make for a fascinating art installation independent of the play being performed there.

LaVoy’s performance as the Trethewey figure is polished and precise, sometimes to the point of being impersonal. She’s most compelling when the poems are at their most personal, as when describing her childhood joy at receiving a blond wig for Christmas, a complicated, funny, troubling memory for the adult child of an interracial marriage to look back on. Ghant does a fine job of making Trethewey’s 19th-century character vivid and alive. Though the bulk of the performance is serious, I especially liked a goofy moment in which he recited lines by Whitman, capturing the dizzily exuberant spirit of the poet’s work.

Despite these many strengths, it’s hard to say that the evening truly comes together to create drama. Audience members are invited to interact with the work in several ways, most saliently to write memories on cards and attach them to a wall on the set. There are also elements of the show in which the fourth wall is broken. Somehow, they add a tentative note to the evening, something uncertain or unsettled about the relationship between creators and viewers, which isn’t really sounded on the page.

“Great poetry was meant to be read aloud” is a truism repeated so often that we seldom question if that’s genuinely the case. It’s fantastic to hear great actors performing great poetry, but what a good poem brings with it is an internal voice, an internal stage, a quiet and intensely personal relationship between writer and reader. A good poem invites us to imagine sound, to imagine the words coming from physical bodies in space. Strangely, the realization of actual sound can strangely delimit potential rather than unleash it. As the poets tell us, heard melodies are sweet, but those unheard are sweeter.