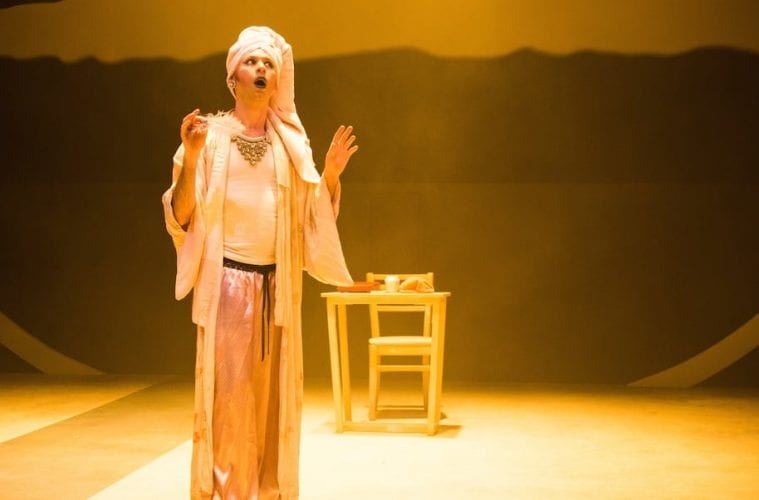 Review: Often transcendent, second half of “Angels in America” firmly hits its mark

ArtsATL theater critics Andrew Alexander and Jim Farmer got together recently to discuss thoughts on Part Two of the new Actor’s Express production of Angels in America. Here are their takeaways from the show.

Andrew Alexander: Hey, Jim. Last night, we saw Angels in America: Part Two: Perestroika. For me, it was one of those rare instances where the sequel was much, much better. I’ve previously thought of Part One: Millennium Approaches as the slightly stronger half of that script, but there’s no way that was the case in this production. I’m just going to chalk up my dissatisfaction with Part One to a bumpy opening weekend. Whatever. The cast has really caught its rhythm, and things just clicked into place in the second inning. I thought this production of Perestroika was transcendent, one of the best things I’ve seen in ages. Did you like it as much as I did?

Jim Farmer: Yes, we both saw it last night — lasting until this morning! I wasn’t quite as enamored as you were, but I did think it was quite strong — and much livelier than the first part. I agree that the cast was more in rhythm during Perestroika. I felt Robert Bryan Davis, as Roy Cohn, was a bit one-dimensional in Millennium Approaches, but he’s certainly not here. He spends the second half of the play in a hospital bed facing death, and it’s a more well-rounded performance, as he is facing some truths about himself and others. Most everyone else is in fine form too, including Cara Mantella, Carolyn Cook, Joe Sykes, Parris Sarter and Louis Greggory. Grant Chapman’s best scenes as Prior are with Cook — she seems to steady his performance a bit. The actor is also very accomplished in some physical comedy segments. Only Thandiwe DeShazor as Belize misses the mark — it’s too much of a caricature for me. What else impressed you about this? 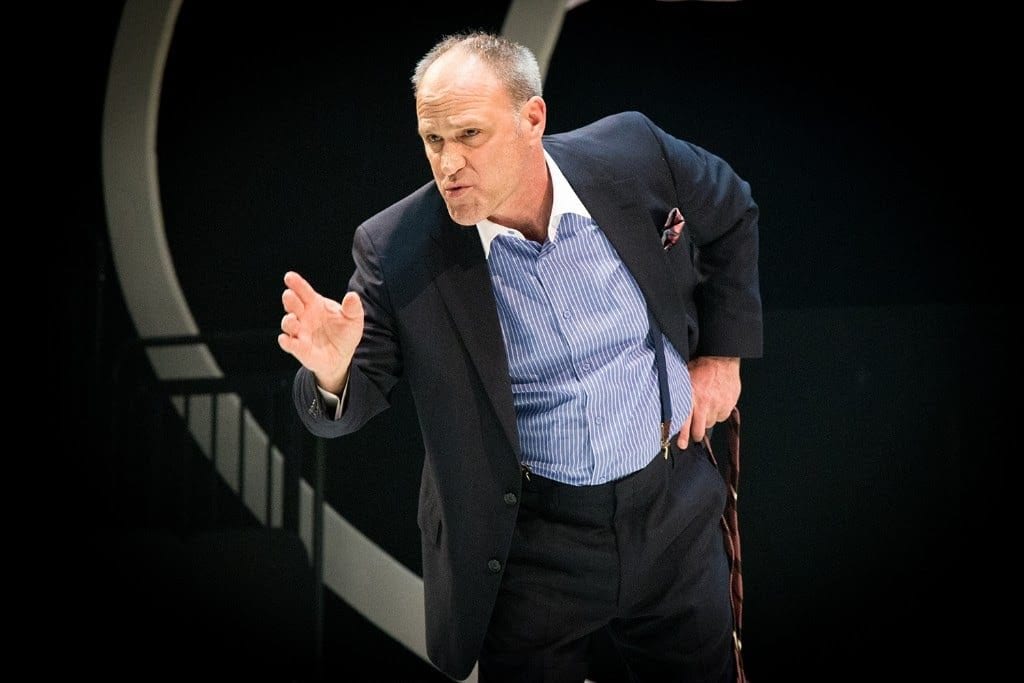 Alexander: I had forgotten how funny Angels in America can be. The whole cast, including Thandiwe DeShazor as Belize, brought that out. Grant Chapman as Prior was a trip in the prophet phase, and Carolyn Cook found some pretty hilarious aspects of Hannah. Interestingly, Parris Sarter brought out a lot of wonderful, surprising moments along those lines as the angel. The angel is inscrutable and scary, but she can also be plain-spoken and funny. Anyway, the whole thing just seemed really alive to me this second round, and it held my rapt attention for the full four hours-plus, which, trust me, is really saying something. Many of the people in the audience had been there since early afternoon watching Part One, and they seemed right on board for the entire ride, as well. However, I did find some of the costuming choices in Part Two downright bizarre. Spoiler alert: An important scene in Part Two takes place in heaven. It is, exactly as it sounds, a little hard to swallow, no matter how a theater chooses to stage it. But in this production, the denizens of heaven are outfitted as — it’s hard to describe — end-tables with swim caps? It looked like a bad Star Trek episode.

The scene as written already has a balls-out, I-can’t-believe-the-playwright’s-really-going-there boldness, so the addition of these outrageous costumes just sent things sailing too far over the top for me, nearly ending my investment in the action entirely. In a split second, I went from absolutely loving the production to having to stifle laughter at it. In the Angels in America television series (which kind of creaks a little during this scene, too), the angels are in street clothes, which helps ease the shock somewhat. You’ve seen other productions. How did they stage this challenging scene? What did you think of it here?

Farmer: It’s funny. I’ve only seen Perestroika once, and that was eons ago at the Alliance Theatre. I can’t recall how that moment was presented. Here, I found that scene just odd. It took me out of the action as well. I must admit, although I really liked this, I found the angel scenes unconvincing and the weakest moments. We talked about the angel’s entrance and how it seemed a little lackluster. For me, an equally important scene is the follow-up moment between Prior and the angel. It’s a long, important scene, maybe the most important in the play, with plenty of relevant dialogue. I didn’t have a problem with the acting, yet it felt really awkward to me. Maybe it was a staging issue, or the costuming, but that section didn’t work for me. I re-read the play after I saw this, and — as you mentioned last time — in playwright Tony Kushner’s notes, he talked about the importance of these interactions and how they needed to be full-blooded. What the angel had to say here got lost and just seemed like an empty monologue.

For the most part, though, this really succeeds. It’s a swell co-directing effort from Freddie Ashley and Martin Damien Wilkins. I had forgotten the humor too. Chapman has some terrific moments as he embraces his prophet side, as does Cook’s Hannah as she finds herself befriending Prior.

Alexander: You asked last week about “how the play is holding up.” If I’d been forced to answer last week, I would have said, “It’s a great play, but I caught the whiff of something antique about it in this uneven production.” But this week, it’s pretty obvious: the whole thing’s a goddamned timeless masterpiece. A big new production is on its way to Broadway as we speak, and I predict it will be a monster hit. 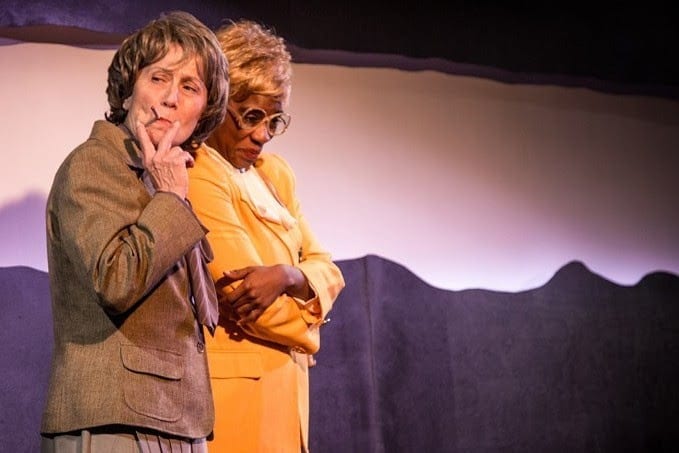 Carolyn Cook and Parris Sarter each give strong performances.

Farmer: Let’s talk about that. Is it a masterpiece — definitely. I don’t know if I’d call it timeless, though. I can see a show like The Glass Menagerie or Who’s Afraid of Virginia Woolf? or A Streetcar Named Desire at any time and have it affect me the same way. Just last year, Actor’s Express staged an excellent version of The Crucible that showed just how potent and topical that play is. I do think Angels in America feels a wee bit dated, like a moment in history. Yet to its credit its central themes undeniably resonate — nasty Republicans, closet cases, religious and political dilemmas and HIV/AIDS, still an issue, especially here in the South.

As I mentioned, I grabbed my copy of the play after I had seen this and re-read it. I will readily admit that it’s a piece of work that I have never responded to emotionally — any version I’ve seen — but from an intellectual standpoint, it’s a stunning piece of writing, dense and complex and — as you mentioned — groundbreaking.

Alexander: The play depicts a particular moment in history, but that’s really just the ground on which so many larger ideas grow. Puritans and witch trials aren’t much of a concern anymore, but as you said, The Crucible still resonates. The themes are big and timeless here, too, in my opinion. Someone said recently that Angels was the Hamilton of its time. And that’s true: it was a play that caught the attention of the entire culture at a time when most people thought theater was all but dead. I suspect people will continue to be moved and excited by this play for a long, long time to come. I don’t think the Actor’s Express production is perfect, but it’s pretty special, and theatergoers who dive in will be glad they did.

Farmer: I imagine this is a production that will have people talking for a while. Here’s a quick question: Do we recommend that audiences split it over two evenings or take the gulp and make it an all-day Tony Kushner/Actor’s Express outing? It’s a massive undertaking not just for the theater producing it and the actors involved, but also for the audience. It’s an investment of eight hours, not including the time to and from the theater. In hindsight I think an all-day affair would be the best viewing option.

Alexander: Good question, Jim. I think the show works either way, but I agree with you that diving in for the entire day is an intriguing option. (By the way, I was surprised to read recently that Parts One and Two originally premiered months apart: that must have been quite a wait back then to find out what the hell happened at the end of Part One!) When I saw audience members who had been there all afternoon for the marathon, nearly eight-hour experience, it also occurred to me that that would be a pretty cool way to see the show: attend Part One in the afternoon for a matinee, break for a nice dinner nearby, and then back to the theater for Part Two. Binge-watch with a theater-loving friend. Actor’s Express should do a T-shirt.