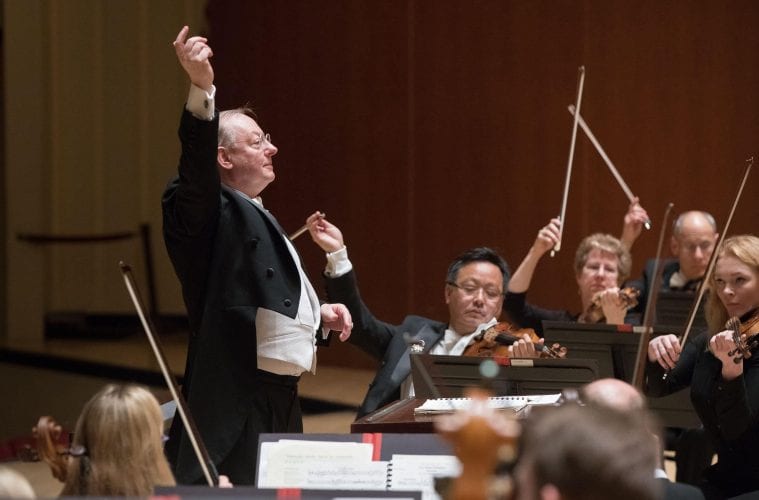 Review: Through a tornado watch and a musical earthquake, ASO plays “A Little Night Music”

On Thursday evening at Symphony Hall, the Atlanta Symphony Orchestra performed a concert of music by Mozart, Rameau and Haydn led by guest conductor Nicholas McGegan. The same program will be repeated on Saturday evening in its entirety. This evening, however, the ASO will present another of its shorter “Casual Fridays” concerts, again led by McGegan and containing the Mozart and Haydn selections, but the music by Rameau will be replaced by François Couperin’s “Pièces en concert,” arranged for cello and strings by Paul Bazelaire, featuring ASO associate principal cello Daniel Laufer.

The concert opened with one of the most familiar works in the classical repertoire: the Serenade G major, K. 525, by Wolfgang Amadeus Mozart, better known in popular culture as “Eine kleine Nachtmusik” (“A Little Night Music” or “A Little Serenade”) — the title given it by the composer himself. Although originally for a string quartet plus optional contrabass, it is just as frequently played by a small string orchestra, as on this occasion. McGegan brought forth a sunny disposition to the music, something he was able to sustain for the entire concert.

The use of a small complement of strings for this concert was evidently occasion for principal stands of the string sections to have the night off. Assistant concertmaster Jun-Ching Lin took the reins of the concertmaster’s seat for the evening, as did assistant principal cello Karen Freer for the principal cello suite, for two examples. Because of the reduced size of forces required by the music on the program, the back of the stage looked empty compared to a typical night, but the size of the sound was good — clear and appropriate to the repertoire on hand.

Next up was a suite of music from the “Les Indes galantes” (“The Amorous Indies”), a ballet héroïque by French Baroque composer Jean-Philippe Rameau — a kind of opera-ballet of the 18th century that features heroic and exotic themes. The suite, its compilation left uncredited in the printed program, proved an interesting collection of highly ornamented late Baroque music for the French ballet-theater.

In 1725, a group of six Native American chiefs visited Paris at the behest of French settlers around the Illinois region. They visited the court of King Louis XV and performed several tribal dances in the the Théâtre-Italien. It inspired Rameau to compose a rondeau: “Les Sauvages.” Over time, Rameau developed his complete ballet héroïque in four acts with a prologue, from which the suite’s nine pieces are drawn — “Les Sauvages” being the final number. The four acts are respectively set in Turkey, Peru, Persia and the American Midwest on the borders between French and Spanish territories — hence the reference “Indes.”

The strangest occurrence of the evening came during the latter part of the fifth section, “Air des Incas pour la devotion du Soliel” (“Air of the Incas for the devotion of the Sun”), when a severe weather alert warning was heard, which included a voice telling the audience to exit the building. When the music stopped, the house lights came on and after a moment a human voice was heard over the public address system saying it was a false alarm and to remain seated. “Entracte!” said McGegan to the audience, cheerfully, after he had stepped down from the podium. He then walked off stage to see what was up. He returned to the podium a short time later, the house lights went down, and the performance continued from where it left off.

Indeed, a small tornado briefly touched down at Hartsfield-Jackson International Airport at 9:13 p.m., and a tornado warning was issued for DeKalb County about 30 minutes later.

Stranger still: in “Les Incas du Pérou” (“The Incas of Peru”), Act II of Rameau’s complete ballet, after the very same “Air des Incas” music, the Incan sun celebration is interrupted by an earthquake — which a protagonist then declares to have been faked. It’s hard for coincidence to get any stranger than that.

Following the “real” intermission came Franz Joseph Haydn’s Symphony No. 104 (“London”), his final symphony. McGegan and the ASO gave it a smartly fresh and solid performance, concluding the evening with a consistently optimistic demeanor — a nice touch on a chilly rain-soaked night marked by threatening weather.