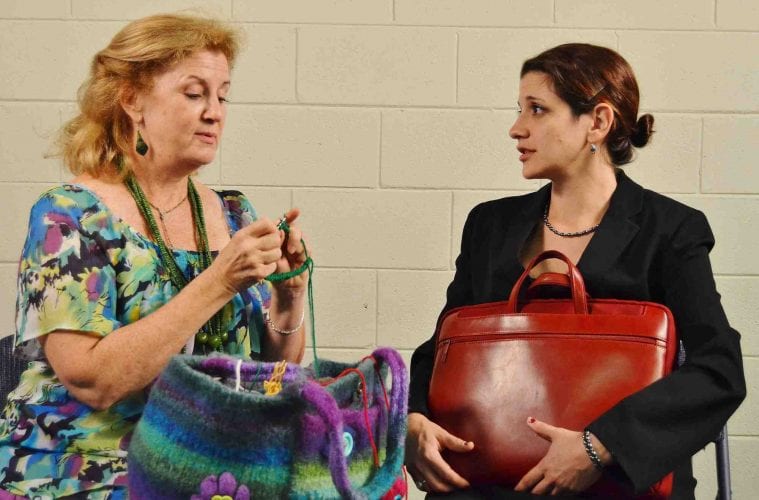 Review: In comedy-drama “Evelyn in Purgatory,” Topher Payne gives us characters worth caring about 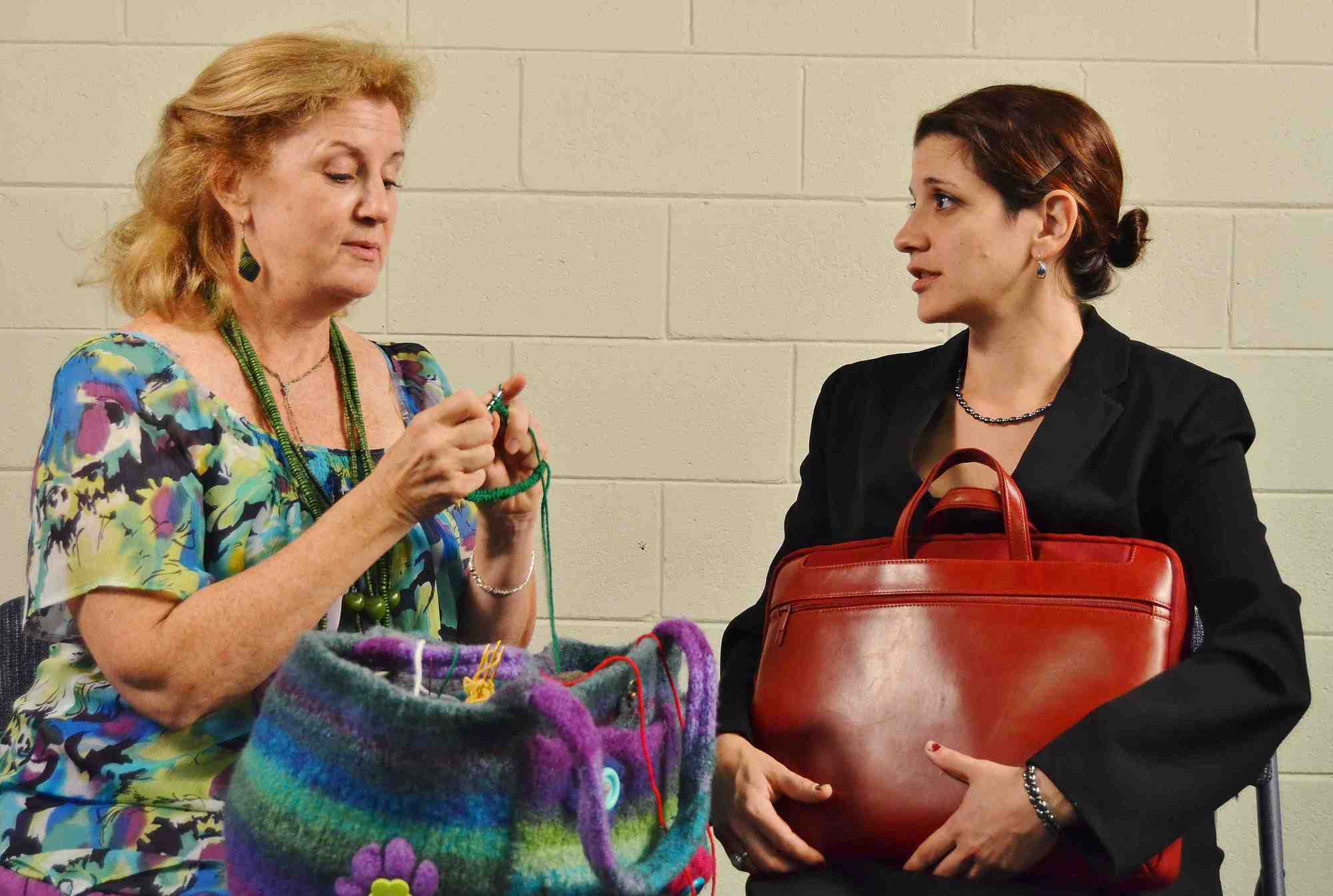 The “purgatory” in “Evelyn in Purgatory,” at the Essential Theatre Play Festival at Actor’s Express through August 5, is a plain room in a New York City Department of Education building where five indefinitely suspended teachers, presided over by a no-nonsense proctor, await their hearings by school officials. Reed Higgins’ straightforward set nicely captures the familiarly airless cinder-block and industrial grey atmosphere of institutional buildings, and it makes an ironic setting for the action that unfolds. The characters slowly warm to one another, soften and reveal themselves in spite of the coldly anonymous surroundings.

“Evelyn” is a world premiere by Atlanta playwright Topher Payne, and it’s a smartly crafted work. In about six scenes, Payne skillfully covers an entire school year as the teachers’ waiting draws on and on. Bored inactivity for the characters could easily become irksome for the audience, but it never does. This is an ensemble piece where we’re kept constantly curious about each character, and we stay invested in the play as a whole.

Rial Ellsworth, as a coach accused of breaking a bully’s wrist, does a particularly nice job of limning the first inklings of truly significant character change, a transformation which, though it’s completed off stage, has sufficiently believable beginnings in front of the audience. There are moments of genuine humor throughout the play, but the best of them belong to Betty Mitchell’s tough and cynical Roberta, who intentionally commits classroom improprieties in order to while away the time in limbo rather than face the hell of the classroom. The hearings themselves are interspersed throughout as monologues, giving each character a searingly revealing moment in the spotlight.

Though “Evelyn” is set in New York, where such “rubber rooms” are a reality and teachers can wait months for a hearing, it hits home in Atlanta. The sorts of pressures, bureaucracies and moral dilemmas that teachers face would hit close to home anywhere, and power struggles — even over something as seemingly insignificant as a comfortable chair — are universal.

I’ll try not to give away too many spoilers here — the plot has some surprises — but a minor point sticks in the craw. Evelyn’s alleged transgression of kissing a high school athlete is certainly an impropriety, but one that seems unlikely to do much serious or lasting damage to the student involved. Her accuser seems more a vengeful snitch than a sympathetic victim of her machinations, and the final moral dilemma of whether or not art teacher Lila should speak up, though well depicted by Jo Haworth, carries a bit less dramatic weight because of it.

The ambiguous ending is problematic as well. Ambiguity and open-endedness are in no way part of this play’s world until the last few seconds; until then everything is writ large. The conclusion it wants is for one of the teachers — the coach seems the most interesting candidate — to unexpectedly interrupt Evelyn’s hearing at great personal cost, to take the principled stand that they’ve been discussing for months. There’s an inconclusiveness that hangs in the air that doesn’t suit an otherwise tidy play, and a previously very happy audience seemed to leave the first show dissatisfied, perhaps even feeling a bit slighted. It’s like a performance by the Rockettes that ends not with a kick line but with a recitation from Sylvia Plath. If clearly limned character transformations and a tidily ticking sense of moral purpose are the play’s currency up to the end, then it seems only fair to provide them there as well.

Nevertheless, “Evelyn” is a remarkably well-constructed and very funny dramatic comedy, in the vein of “Steel Magnolias” or “Sordid Lives.” The prolific Payne seems likely to have a giant hit along those lines very soon. It would be wise to watch his stuff while it’s still so close to home.