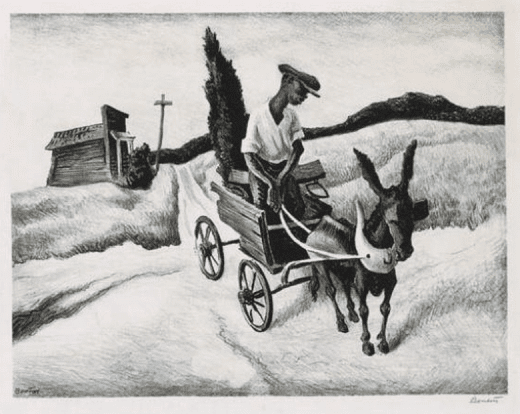 Benton’s mature work as a regionalist and mural painter was committed to capturing the hard-bitten, melancholic, stubbornly persevering quality of ordinary people in America’s heartland. He developed a style of social realism that he thought was particularly American and easy to read. But as a young artist in Paris, New York and Chicago in the early 20th century, Benton was swept along by the currents of modernism, and they bleed into his later art despite his determination to resist them. Post-Impressionism, Cubism, Expressionism, newspaper cartoons, and the proto-Surrealism of El Greco complicate his work and make it interesting.

The drawings among the two dozen works here, some of which were studies for murals and larger works, reveal the “skeleton” that supports the curiously curvaceous, liquid figures characteristic of Benton’s murals, and they help in understanding what Benton is about.

These long-boned, gnarly, sculpted figures — many of them African American males — express both strength and pain. The arresting “Study for Slaves” (1925) captures something essential about Benton’s fascination with the male figure through the diagonal organization of the figure on the page and lines that are both sculpted and angular as well as the subject’s vulnerable posture.

There’s something uneasy about Benton’s representation of the figure, which often hovers uncomfortably between caricature and expressionism. He seems to take a certain glee in distorting the human form. In his best works, however, emotion prevails over caricature.

In the lithograph that gives the show its title, the exaggerated length of the donkey’s ears and the driver’s neck contrast with the small size of the donkey’s legs and the cart, and the effect is almost cartoonish. But the tilt of the driver’s neck in tension with the opposite tilt of the tree, the long, spectral shadows and the surrealistic emptiness of the landscape evoke complex feelings. The leaning telephone pole, like a cross in the background, confirms Benton’s empathy with the difficult life of the driver of this rickety cart.

In “Black Molasses,” a pencil, ink and watercolor from 1934, the figure’s long neck (perhaps a joining of mannerism and social realism) and skeletal features create a disturbing portrait. Benton’s most affecting work does not shy away from the ugliness of his subjects or their hard lives. In fact, he seems to embrace the ugliness in hope of making us see that a lifetime of dejection and exploitation results in indelible distortion. “Black Molasses” presents the viewer with an image that is spectral, unnerving, unresolved.

Benton was a chronic rambler. At regular intervals throughout his life he would conscript a student or friend and set off on a rural walk-about. The goal was to see what was going on in the “real” America — in the dusty towns, gritty job sites and falling-down homesteads — as opposed to art capitals New York and Chicago, where the outspoken artist had made more enemies than friends with his rejection of modernist aesthetics, denunciations of the leftist political views he had once espoused and dismissal of urban artists and intellectuals as phonies.

These expeditions yielded drawings that would evolve into murals, paintings and lithographs. “Standing Male Negro Gospel Singer with Hands Clasped,” a study for “Arts of South,” a segment of a 1932 mural initially installed at the Whitney Museum (now at the New Britain Museum of American Art in Connecticut), is a particularly nice drawing that reveals the underlying structure of Benton’s figures. The lithographs on display depict the vanishing culture of rural America — a group of men talking politics around the county courthouse, African Americans walking into a diminutive country church, young people singing, a gate-side conversation.

In “Planting,” Benton applies a whole range of textures to make the contour ruts of the plow engaging to the eye. The farmers lean into their work, their steps synchronized to create the hopeful atmosphere of spring sowing. The scene is in the lineage of Millet and Van Gogh.

“Photographing the Bull” rises above the sentimentality that mars other works. Here, Benton neutralizes a cute narrative — a cowboy trying to make a bull behave so a photographer can take a picture of it — through a dynamic composition. The arms of the cowboy, the hand of the photographer, the tail of the bull and the jagged spike of sky create a wild, precarious dance. The sloping diagonal of the fence and the serpentine ruts in the road reinforce this undulating quality to evoke some sort of primal, unstable energy.

Benton’s fortunes as an artist have risen and fallen dramatically over the decades. The brash contrarian managed to outrage almost everyone — communists and capitalists, city folks and country folks, intellectuals and the hoi polloi. In 1941 he was fired from a teaching post at the Kansas City Art Institute for homophobic remarks.

Nevertheless, he was considered one of the most important artists in America during the 1930s and ’40s. A 1934 Time magazine cover story on regionalism in American art seemed to seal his reputation, and as Benton noted, it was “good for making money.” His murals were in demand during those years. The post–World War II wave of Abstract Expressionism made his work seem reactionary and out of date, and it fell sharply out of favor.

It is a mistake, however, to underestimate this artist’s importance. Benton captured the enigma, awkwardness and strength of the rural American character. Despite jarring fluctuations in his political views, Benton was consistent in his determination to represent ordinary, working people and to celebrate the rustic aesthetics of an unvarnished, unaffected American core, which seemed to him nearly extinguished by the “parvenu” spirit of commercialism. He relished the nation’s diversity and, as the works in this exhibit indicate, he was particularly engaged by rural African American culture in the South.

And he passed his sensibility along to his student Jackson Pollock. Despite the vast surface differences in their work, Pollock absorbed much from Benton, including the American swagger that made him a fearless innovator.