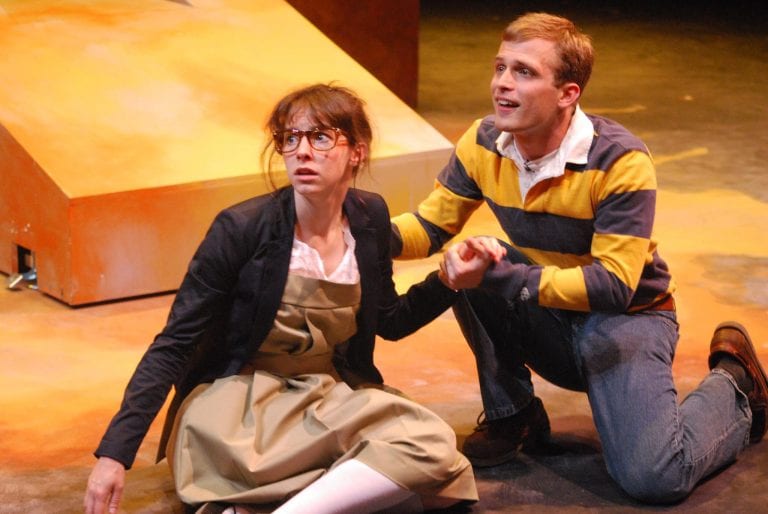 Emma Jackson and Andrew Crigler bring depth to their roles.

The runaway success of the film adaptation of “The Hunger Games” has spawned online discussions over whether it’s intellectually limiting — or simply annoying — for adults to read young-adult fiction such as Suzanne Collins’ dystopian best seller. The case against it doesn’t stand up to much scrutiny: if a novel is written in clear, accessible prose and avoids explicit depictions of certain mature themes, does that disqualify it from adult interest? The argument doesn’t just throw out the baby with the bath water; it throws out classics ranging from “To Kill a Mockingbird” to “The Old Man and the Sea.”

In the 50-year-old young-adult classic “A Wrinkle in Time,” Madeleine L’Engle introduces fantastical characters and planets, but with darker themes and less simplistic prose than C.S. Lewis’ structurally similar “Narnia” series. At Theatrical Outfit, Justin Anderson directs John Glore’s effective stage adaptation of “A Wrinkle in Time” and manages to convey L’Engle’s imaginative story within the constraints of the stage.

“A Wrinkle in Time” opens with the oft-parodied line “It was a dark and stormy night,” but it avoids Gothic cliché for the fraught emotional life of Meg, played by Emma Jackson. The schoolgirl’s anxieties keep her from sleeping at night, partly as a consequence of her scientist father’s disappearance more than two years ago. Did her father (Mark Cabus) abandon his family, or could he be missing due to his mysterious research? The play quickly establishes that Meg finds much of her emotional support from Charles Wallace (Andrew Crigler), who seems to have some kind of empathic power that gives him more assurance and insight than a typical boy of his years.

Charles strikes up a friendship with some eccentric newcomers to the neighborhood — Mrs. Whatsit, Mrs. Who and the unseen Mrs. Which (Marianne Fraulo, Kate Donadio and Cabus) — who move into a spooky abandoned house and seem strangely well informed about the kids. The whimsical, witch-like women summon sensitive jock Calvin (Lowrey Brown) and, via a wrinkle in time (more specifically, a wrinkle in space-time), transport the youngsters to another world.

Mrs. Which and company reveal their true natures as shape-shifting, superintelligent alien entities engaged in a battle with “the darkness,” a shadow of sentient evil that consumes planets that have civilizations. Meg’s father turns out to be a prisoner on such a planet, called Camazotz, and the three aliens must send the kids alone to attempt to rescue him.

The stage version of “A Wrinkle in Time” shares some DNA strands with the long-running BBC series “Doctor Who” (which, coincidentally, debuted the year after “Time” was published). Both feature monstrous forces terrorizing Earth-like planets, comical aliens prone to extravagant overacting, and borderline cheesy visual effects. This is probably the only time you’ll see, at the Balzer Theater at Herren’s, a giant brain hooked up to a space-age gizmo.

The weakest aspect of the show may be Fraulo and Donadio in their “silly” alien guises, which seem like crazy female relatives playing for a pre-kindergarten audience. Of course, aliens needn’t behave like human beings, but these particular aspects of their performances seem disconnected to their alien nature. When Fraulo sheds her tweedy outfit for a gown and enormous wings, she captures the character’s otherworldly poise.

Theatrical Outfit’s initially spare production builds up to cool costumes and props, including a towering non-humanoid creature called “Aunt Beast” and a spokesvillain with red eyes glowing from what resembles a welder’s mask. The video projection that accompanies the “wrinkles” has a retro-psychedelic look reminiscent of “2001: A Space Odyssey” and its imitators. Camazotz’s all-pervasive, totalitarian controller reflects the Cold War era’s fear of communism (a la “Invasion of the Body Snatchers”) as well as the social conformity of the Eisenhower era.

The heart of the play lies with Meg, Charles and Calvin and their emotional connection to one another in the face of overwhelming opposition. In an amusing running joke, Calvin holds up his hands in the “high-five up top” gesture without getting a return, and his face conveys “Don’t leave me hanging” (which would be an anachronism if spoken aloud). Emma Jackson captures Meg’s confusion and enlightenment as her adventure also serves as a journey of self-discovery, and her “faults” may be her greatest strength.

“A Wrinkle in Time” can be a little more disturbing than the usual young-adult fare, because the evil on Camazotz controls the entire government and social structure. It can hit closer to home than a dragon or wicked witch. At the risk of spoiling the ending, L’Engle posits “love” as the ultimate means to counteract evil.

As an adult and a father, I find that a suitable message for young readers and audiences, but an incomplete one for people with more life experience: “So we should fight totalitarianism with love and … that’s it?” Maybe that awareness of real-world complexity is what separates the young-adult readers from the grown-ups. Theatrical Outfit’s “A Wrinkle in Time” may not answer such questions, but it’s an intriguing show that deserves credit for bringing them up.