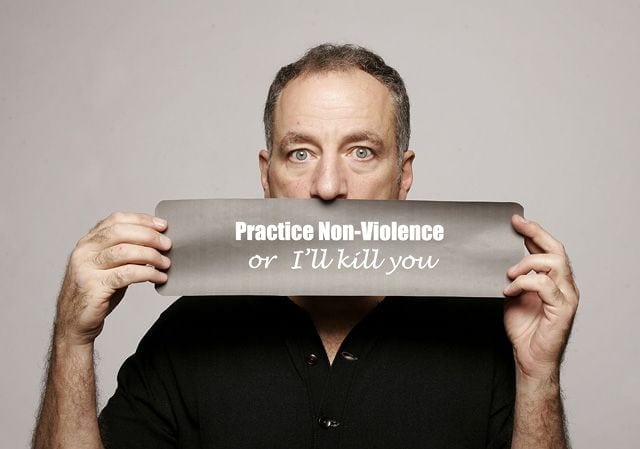 Preview: Paul “Beakman” Zaloom’s “White Like Me” will satirize race at Puppetry Center "It’s all very frivolous and silly, which makes it very powerful," performance artist Paul Zaloom says of “White Like Me: A Honky-Dory Puppet Show.”

In a production he describes as “seriously funny and funnily serious,” performance artist Paul Zaloom upends many post-racial assumptions in “White Like Me: A Honky-Dory Puppet Show,” his satire of the anxieties of white people who face the so-called “de-honky-ization” of an increasingly melanin-tinted world.

Zaloom, a Los Angeles-based entertainer who is widely known as “Beakman” from the educational science TV program “Beakman’s World,” uses toy theater puppetry, ventriloquism and a high-definition video projector to explore these themes. It’s part of the teen and adult series, recommended for ages 18 and up, at the Center for Puppetry Arts April 20-22.

In an interview, Zaloom, who seldom ponies up a straight answer, explained his idiosyncratic medium, this topical show and his roots in the venerable, socially conscious Bread and Puppet Theater.

Paul Zaloom: There are all of these plays and other productions exploring different ethnicities, and given that white people will be a minority by 2042, I thought it would be satisfyingly idiotic to talk about the trials and tribulations of being a Caucasian male — normally the province of the Ku Klux Klan or neo-Nazis. I wanted to satirize the ridiculousness of some of the conventional wisdom you hear — for example, “Columbus discovered America.” How could something have been discovered if there were people already living here? C’mon.

ArtsATL: How would you outline the plot?

Zaloom: There are essentially two sections to the production, in which I play 40 characters. I use old-school ventriloquism to introduce this idea, with a dummy who has been stashed in a box for the past 50 years. I narrate and explain what’s been happening all this time, leading up to the election of President Obama, and this dummy reacts with shock, sarcasm and bemusement — when he hears “Obama,” he says, “Gesundheit!”

The dummy and I discuss ethnicities and pride. It sounds like very actorly talk, but what I’ve learned about ventriloquism, which I just started doing in the past year, is that the little idiot writes his own lines. It’s almost as if the brain partitions off, and the dummy ad libs.

Then we go into the second part, which could be called “Adventures of White Man.” It uses a mini-proscenium with various toys, junk and debris. “White Man,” the hero-villain, who talks out of the side of his mouth like a combination of a gangster and W.C. Fields, leaves the Planet Caucasoid to civilize Planet Earth. He’s an alleged altruist and fails at that, then an alleged rescuer and fails at that, and then he eventually joins the Tea Party. White Man is played by 12 different puppets.

ArtsATL: What’s with the troll doll?

Zaloom: A 1970s-style troll doll is used to represent a Caucasian hairdresser.

ArtsATL: Aside from the “found art” quality of the troll doll, do you make your own puppets?

Zaloom: I don’t have opposable thumbs, so I can’t build anything. No, actually, I come up with the story and the idea, and my collaborator, Lynn Jeffries, who is a renowned puppet designer and dramaturge, executes the actual construction of them so they’ll work.

ArtsATL: How did you get involved in puppetry?

Zaloom: I went to this wild hippie college — Goddard in Vermont — with no rules, no majors and no academic regimen whatsoever. I like to say I majored in mescaline with a minor in psilocybin, but maybe you shouldn’t [use] that. When I was 19, I stumbled into a Bread and Puppet workshop, and I wrote a paper on it — the only paper I wrote in college, actually.

Then I started touring with Bread and Puppet, and it was a slippery slope from there. Puppetry satisfies my megalomania because I get to play all the parts, write the show, design the stage, all easily managed on a very small budget of, say, nine bucks. And within that framework, I can blow up the world, make skeletons talk, melt something — whatever strikes my fancy. I’m self-employed, and let me tell you, my boss is a real moron.

ArtsATL: And how old are you?

Zaloom: I’m 88. No, just turned 29. Just kidding! Seriously, I’m 60 — old enough to have grown up in the wake of the civil rights movement, which was the most profound event in my lifetime, and to have gone to integrated summer camps. When Obama was elected, there was a lot of joyful screaming at my house.

ArtsATL: How have your audiences responded to “White Like Me”?

Zaloom: I’ve been tarred and feathered and run out of town on a rail. No, actually, people have been very responsive and supportive, and we’ve all had a swell time. It’s a comedy. It doesn’t have a message; if it did, that would be Western Union. The whole point is to make people laugh and have a good time. The whole thing is so dumb that I can get away with serious stuff. It’s all very frivolous and silly, which makes it very powerful. So I’m inviting people to come out and see this stinking show and laugh their asses off.