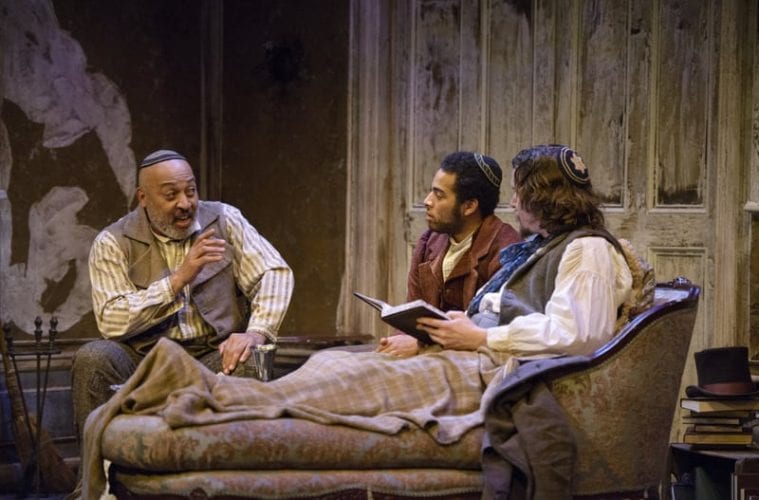 Review: Alliance’s “Whipping Man” gives intriguing new angle on Civil War, but too much is unsaid

During the opening minutes of The Whipping Man, you might start to think you’ve seen this story before. Indeed, the decaying Southern mansion, the post-war atmosphere of defeat and deprivation, the injured, hungry and weary soldier busting through the front door of the big house in the middle of the night may all seem like elements of familiar, tried-and-true Civil War dramas. But when former slave Simon (Keith Randolph Smith), who’s been watching over the abandoned house during the last days of the war, recognizes the collapsed soldier as the son of his former owner, he recites a Hebrew prayer, and we know instantly that we’re in an entirely new place.

The three-character drama, at the Alliance Theatre through April 7, gives us the story of Caleb (Jeremy Aggers), the son of a wealthy Jewish slave-holding family in Richmond, as he returns home from the war to deal with a new reality of defeat for him and emancipation for his former slaves, Simon and John (John Stewart). The surrender of the South coincided with Passover, and the play depicts the complicated Seder that might have taken place between Caleb and the newly freed slaves following the collapse of the Confederacy.

Playwright Matthew Lopez isn’t interested in just giving an old story an intriguing new spin, but seems intent on insightfully delving into how slavery caused irreparable damage to both psyches, master’s and slave’s. He clearly loves setting out the rich ironies of the Passover Seder as a celebration of the Israelites’ liberation from Egyptian slavery. But Judaism remains the frame, with the lasting damage of slavery — slavery as an inexpiable sin and unfixable harm — as his true subject.

The new show, which was a success in New York and has become one of the most produced plays in the nation this season, gets a top-notch production at the Alliance with three fine actors. I especially admired how Stewart gives John’s cocky flamboyance a philosophical, absurdist, existentialist edge: it’s deliciously fitting when the Act II curtain rises on John dressed in the short coat and top hat of a Southern gentleman as Caleb sits immobilized.

But for all the talk about freedom and choice that occurs during The Whipping Man, not a lot of either is brought to the stage. Theatrically, the action starts to seem a bit tethered, and there are surprisingly few choices depicted as live drama. The subject matter itself is intense, but there’s something massive and inert here, too. Caleb, John and Simon are hiding out in the turbulent days immediately after the Civil War, but they seem practically marooned, almost too isolated for a sense of narrative possibility to develop.

The Seder becomes the crucial event of the second act, and it’s beautifully done. But we don’t get a rich sense of Judaism throughout: we want to hear more about Caleb’s family’s relationship to the faith and the outside world. We learn that Caleb has abandoned his belief after witnessing the horrors of war, but beyond that we don’t hear much about how his family managed in antebellum Richmond, surely a difficult and unusual place to be Jewish. We don’t hear much about the family’s history at all — the father remains a shadowy non-presence — and though it’s often put forth by the characters that John and Simon likely had it better than slaves on nearby plantations, little mention is made of what the family actually did or why it needed to own slaves. It comes as a disappointment, too, that with so much invention in the play, the character of Simon falls into the familiar trope of the old man dispensing wisdom, grace and spirituality.

The Whipping Man offers an intriguing allegory, with its new angle on a complicated milieu we thought we’d seen from every possible side, delivering up intense and difficult subject matter, but in the end it doesn’t quite make good on its promise of drawing viewers into a dramatically gripping story.