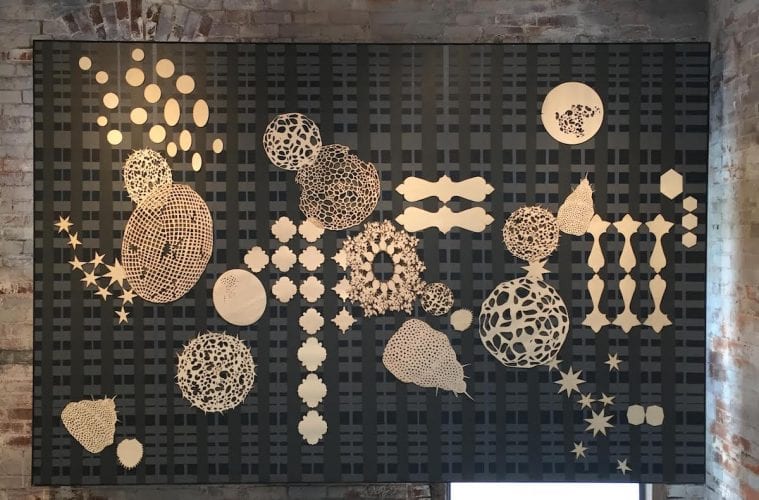 The Translated Mark at Whitespace, on view through March 25, coincides with the SGC International Atlanta Print Conference in Atlanta. The five featured artists refer to printmaking processes in their work — some adhering to traditional methods, others straying from conventional techniques. A printmaker’s love of line, pattern and grayscale ties the disparate artists to one another. 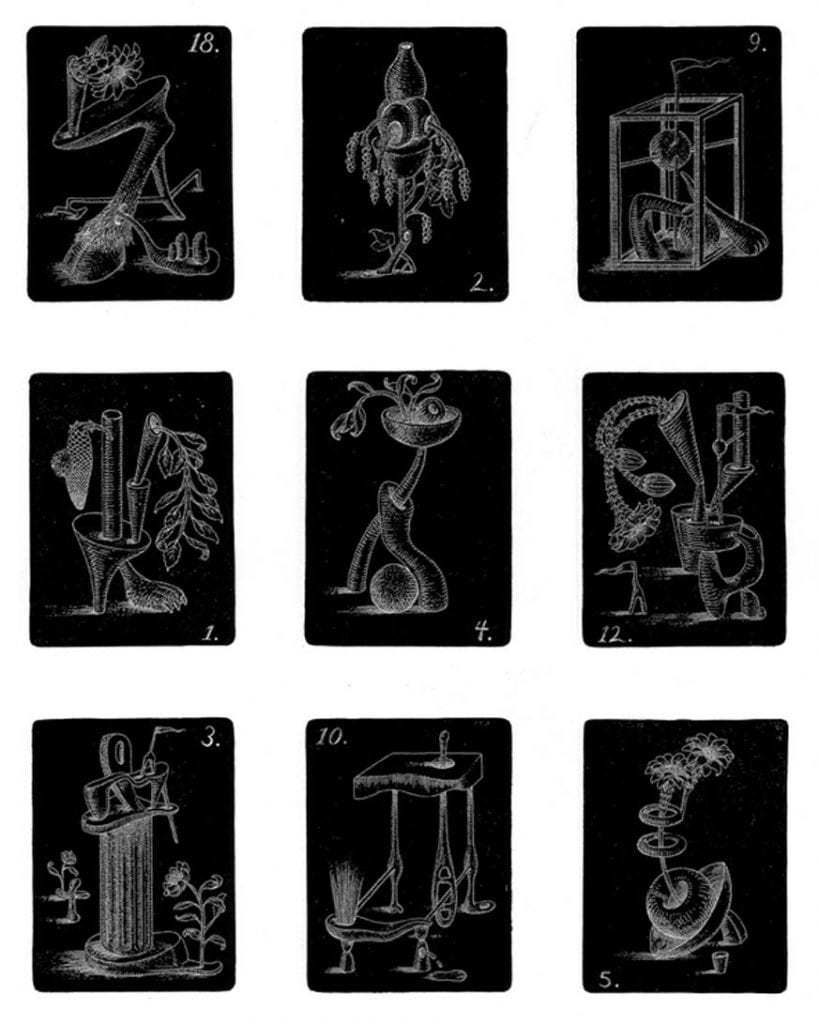 In terms of process, Joe Tsambiras is the most orthodox of the five artists. His otherworldly imagery is elegant and strange. A series of white-on-black etched cards allude to the earliest intaglio prints in Western history — playing cards. One set of printed cards, Forms I, exploits the spidery lines of the etching technique. Invented in Renaissance Germany, etching produces extra-fine lines difficult to obtain in earlier processes. Forms I features organic forms with architectonic and humanoid characteristics. Number 3, for example, shows a fluted column topped by a biomorphic eye of a needle and a billowing flag. Similarly, Number 18 morphs from a hoof to a horn-like mouth from which a flower inexplicably sprouts. Tsambiras synthesizes the influence of Northern Renaissance artists like Dürer and Bosch but also twentieth-century Surrealists such as Miro and Di Chirico. Yet, his style is deeply idiosyncratic, all his own. Laid out achronologically, they evoke tarot cards — yet, following a hidden system.

Also utilizing intaglio techniques, Ann Stewart’s Tethering Corollaries I is a dual image consisting of an etching and aquatint. A later refinement printmaking, aquatint can make the softest, fuzziest effects of intaglio methods. Part of the pleasure of Tethering Corollaries I is Stewart’s deft technique. One side is crisp and clean, a labyrinth of overlapping cubes; similar in composition, the other side is grainier, its dramatic chiaroscuro the unmistakable result of aquatint. Stewart translates her complex, multifaceted two-dimensional rendering into objects — sculptures made with a 3D printer.

Laser-printed wool felt shapes make up Teresa Cole’s The Phenomenology of Pattern. Though not traditionally printed, Cole’s repeated forms evoke the most essential tenet of printmaking: its reproducibility. Intricate organic shapes are arranged against a gray and black plaid background. Edges are burnt charred, bearing the mark of the laser that cut them. Pattern is the core of Cole’s Infusion, an installation of dyed relief printed washi, a traditional paper made in Japan, with bamboo. The paper is made of various natural materials, commonly mulberry bark, according to Cole. Her prints are presented in rolled form, projecting outward from the wall with a sculptural presence.

Cassidy Russell’s works, such as Weaving a Dress from a Monarch’s Cocoon, evoke printmaking’s longstanding relationship to words (even prior to Gutenberg, woodcut was an effective way to reproduce and disseminate text). Vertical strips of gray and white stained paper are tacked together. Some strips are stitched, the patterns recognizable as the looping flourish of handwriting. Cut apart and reconfigured — much like a thread on a loom — the text becomes pattern, illegible and gestural script. 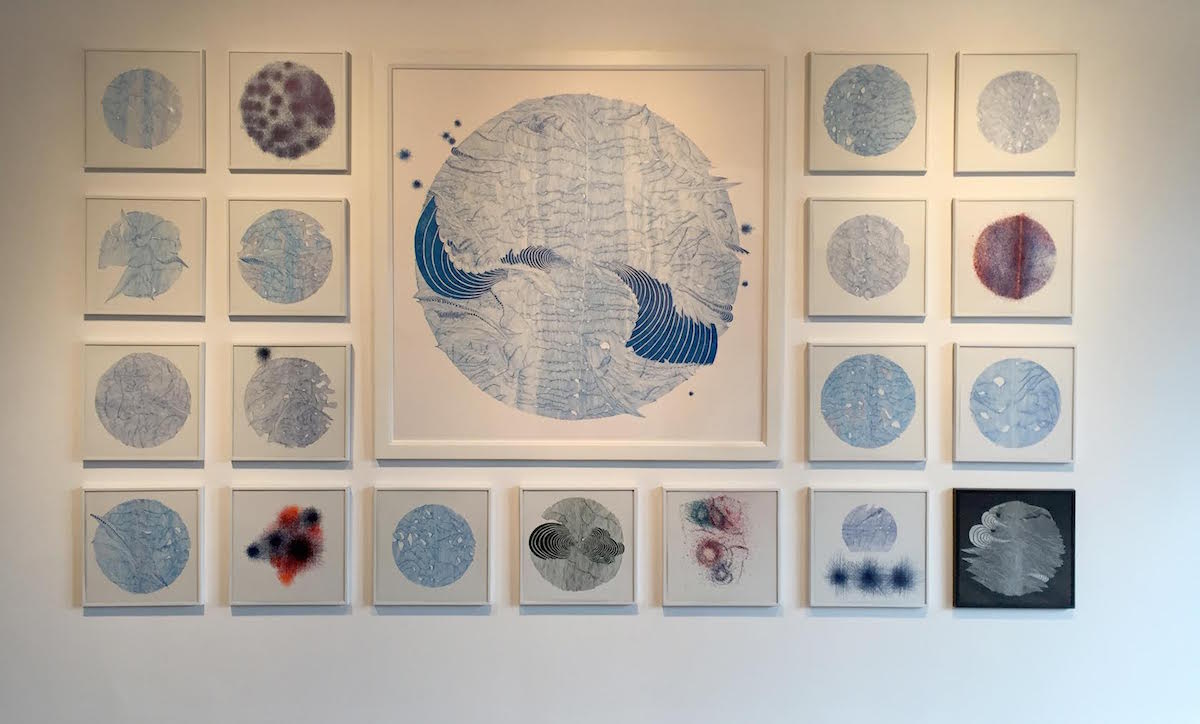 Craig Dongoski’s H E M I S P H E R E S strays furthest from conventions of printmaking, its title and imagery suggesting topography. Obsessive and linear, its lines range from densely accumulated cross-hatching to cross contours. Occasionally, Dongoski uses a circle-and-dash pattern. Throughout his work Dongoski seems on the verge of communication. Zigzagging contours seem like cartographic renderings of mountain ranges; irregular negative spaces look like craters and lakes seen from above; circles and dashes read as jumbled zeroes and ones of binary code. His impressive installation pushes against the bounds of printmaking. Repetition is the core of both printmaking and his drawings — each is a variation of a formula — but for me, part of the appeal of his drawings is their cryptic singularity.

In conjunction with a reception on March 17, Dongoski will integrate sound and drawing in a performance. Inspired by a line from Rainer Maria Rilke’s essay, Urgeräusch, (“what outcome would occur if the phonograph needle were allowed to traverse the sutures of the skull?”), the artist will collaborate with musicians to create Apocalypse N O O S P H E R E.

Three underlying themes emerge from the exhibition: repetition, technical innovation and communication. First, reproducibility is a basic formal requirement of printmaking. Cole questions the requirements of reproduction in her laser-printed forms. Dongoski skirts this in H E M I S P H E R E S, but nevertheless employs repetition of a visual formula. Second, the application of new technology to older methods appears most notably in Stewart’s use of a 3D printer and Cole’s application of a laser printer. Printmaking sometimes seems like the elderly, out-of-touch parent of graphic design and digital media. This exhibition reminds printmaking was born out of — and remains connected to — innovation. Finally, and most complexly, the exhibition deals with the notion of communication. It is treated as an aesthetic system divorced of its most basic requirements of clarity and efficiency: Russell’s stitchery looks like calligraphy, Stewart and Dongoski’s renderings look like atlases but don’t map anything, and Tsambiras’ cards follow an unseen system, both portentous and indecipherable. Perhaps this is the crux of The Translated Mark: the problem of translating the ineffable into visual form is one of art’s ongoing and most compelling challenges.