Review: “The Salesman,” “Toni Erdmann” are foreign film Oscar nominees that live up to the hype

A cracking apartment window is the first of many fractures to follow in The Salesman, the latest drama from Oscar-winning Iranian master Asghar Farhadi (A Separation, Fireworks Wednesday). Nominated this year for the Best Foreign Language Film Academy Award, it’s a portrait of a marriage — or, actually, of several.

One of them is fictional — that of Willy and Linda Loman, characters in Arthur Miller’s Death of a Salesman. Those roles are being played at a community theater in Tehran by Emad (Shahab Hosseini), a high school teacher, and his wife Rana (Taraneh Alidoosti). Theirs is the apartment with the cracked window — the victim of a middle-of-the-night structural subsidence that sends Emad, Rana and their neighbors fleeing into the street.

In the following days, their friend Babak (Babak Karimi), who costars as Charley in the play, leads them to an available apartment in his own high rise. The woman who lived there has left behind a room full of personal items and some flashy clothes. Seems she used to, um, entertain a lot of male visitors, day and night. “She lived a wild life,” one neighbor in the new building says with discreet understatement. (As in his other films, writer-director Farhadi creates a sense of an entire, interconnected culture that extends around his main characters.)

The couple move in, and something terrible happens. While Emad is detained at the theater, talking to censors who want him to trim three scenes from Miller’s script, Rana goes home to remove her old-age makeup and take a shower. She leaves the door unlocked for Emad. Instead, a stranger enters.

What happened? Emad discovers blood in the bathroom, bloody footsteps on the stairs left by the retreating assailant, and he reunites with the battered Rana at the E.R., where neighbors have taken her. The Salesman conveys the bruised emotional limbo of days following a life-altering incident — especially with the anxiety and confusion that comes from Rana’s refusal to tell Emad exactly what transpired. She may not really remember it herself.

No one wants to report the incident to the police. It’s implied that the societal shame Rana would face for reporting the incident could outweigh the satisfaction of finding and bringing the man to justice. (That’s one of the quiet cultural criticisms Farhadi slips into his film, along with mention of the theatrical censors.)

Emad reaches his limit, though, dealing with a wife who’s emotionally closed off but can’t stand to be left alone. “You blow hot and cold,” he complains. “At night, I can’t come near. In the day, it’s ‘Don’t go.’”

So he takes things into his own hands, becoming a do-it-yourself detective and tracking down the man he believes is the culprit. Of course, eye-for-eye vigilantism is almost never a good notion.

As in his other films, Farhadi presents a very realistic-seeming scenario that’s threaded throughout with quiet, masterful details that lead to almost unbearable moral suspense. His reason for using Death of a Salesman as a kind of urtext clicks into horrible relevance in the film’s second half. The symbolism might seem facile if the emotional effect Farhadi achieves weren’t so devastating. He has an uncanny way of leading us toward a climactic sequence that plays simultaneously like a series of releases and entrapments.

Another Oscar nominee for Best Foreign Language Film also comes out this month. It includes one of the most ridiculous yet moving embraces you’ve ever seen in a movie. Opening February 17, Toni Erdmann is a peculiar, engaging hybrid of a film. Part of its acclaim may stem from the juxtaposition of two adjectives that don’t typically go together: “funny” and “German.”

An epic comedy of discomfort, it starts off in the tidy German town of Aachen, where middle-aged music teacher Winfried (Peter Simonischek) lives with his ancient dying dog, and plays mild practical jokes on folks who cross his path. That habit becomes more urgent when he decides, without warning, to visit his only daughter, Ines (Sandra Hüller), in Romania.

Stationed in Bucharest as consultant for an oil company, Ines is a tense, unsmiling workhorse, with her blond hair as tightly spiraled as Kim Novak’s in Vertigo. “Are you really a human?” Winfried asks at one point. He means it as a joke, but it plays as coldly as it sounds because, well, in her humorless career drive, Ines does come off sometimes as an automaton. 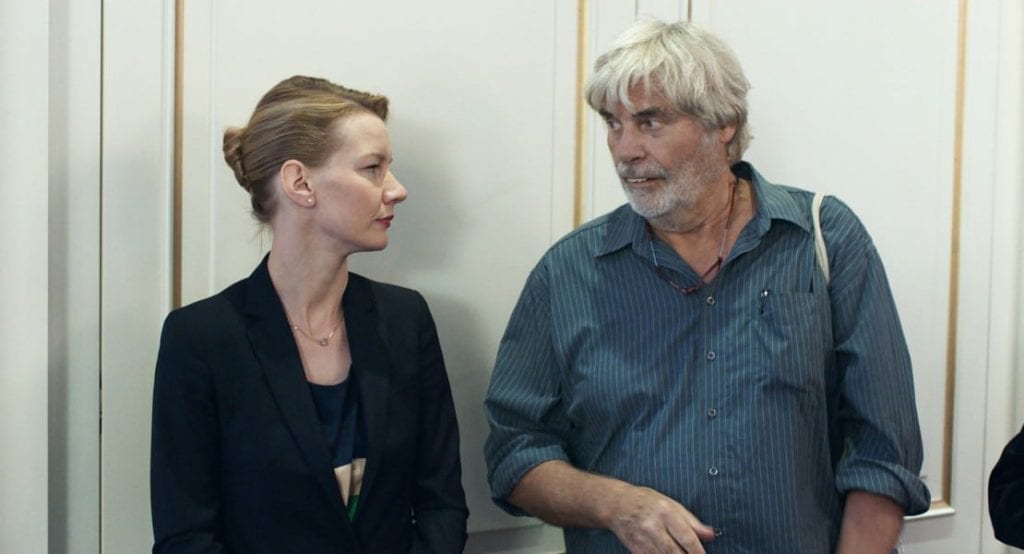 She knows she’s paid well in exchange for serving as a kind of sacrificial lamb: the oil executives she works for want her to be the mouthpiece for the unpopular, staff-eliminating shakeups they’re too cowardly to admit are their own initiatives. There’s a reason she doesn’t smile a lot. Written and directed by a woman, Maren Ade, the movie is shrewd at depicting the sexism, both blatant and casual, that Ines fights every day.

Doesn’t sound like much of a comedy, does it? Well, that changes when Winfried says goodbye to Ines. But instead of leaving Romania, he begins to shadow her and insert himself into her business dealings, wearing fake buck teeth, a ridiculous wig, and introducing himself to Ines’s startled friends and colleagues as a life coach called Toni Erdmann. Ines herself is taken so much by surprise that, before she can unmask her dad, she finds herself playing along with his strange kind of performance art, designed to shake her out of her careerist rut.

At nearly three hours, the movie is too long. But the duration gives Toni Erdmann a unique texture. The mournfulness that infuses the movie is the flipside of its moments of bizarre humor. (Both leads are good, but Hüller, in a tricky role, is sometimes a marvel with her mix of fragility and steel.) Three moments to look forward to: a memorable sex scene involving petit fours, the passionate performance of an old Whitney Houston song, and a Sunday brunch that turns into “a naked party.” Oh, and I forgot to mention the appearance of a hairy, mythological Bulgarian creature known as a Kukeri.

It’s hard to know if writer-director Maren can replicate this peculiar blend of tones in future films. This could be a one-off, a lightning-in-a-bottle film where all the odd elements improbably cohered. One thing I think we can count on, though, is that a planned American remake of Toni Erdmann, starring Jack Nicholson and Kristen Wiig, sounds like a disaster just waiting to happen.