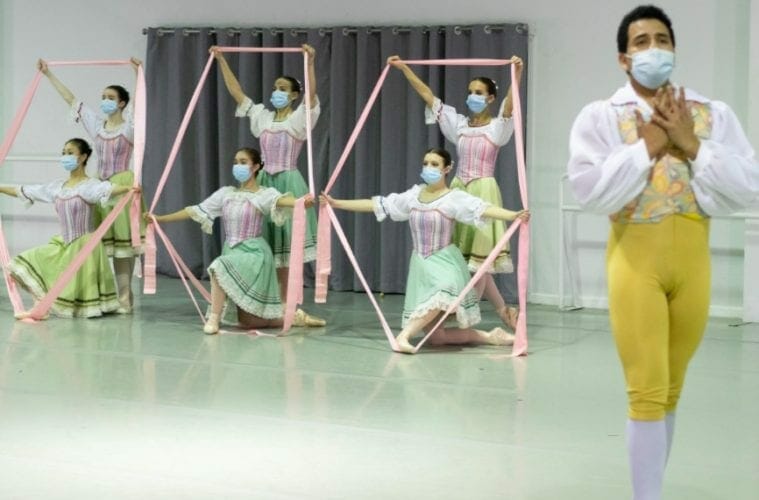 Like most performing arts organizations, the pandemic has posed unprecedented challenges for The Georgia Ballet. And yet, with last weekend’s modest program Love Classics, this smallish Marietta-based company has, in my 10-plus years of seeing it, never looked better.

The third in a series of four in-studio and socially distanced showcases, the program of excerpts, mainly from 19th- and 20th-century classics, revealed a warmly cohesive group of dancers who are committed to embodying romantic and classical styles in a way that is fresh and deeply satisfying.

This is undoubtedly due to the care and diligence of artistic director Daet Rodriguez and ballet mistress Margit Peguero. A married couple, both artists danced principal roles in works from the classics to Balanchine to contemporary pieces with the Ballet de Camagüey in Cuba and the Teatro Centro de Arte-Leon Febres Cordero in Ecuador. Kelsey Stanhope dances in the balcony pas de deux from “Romeo and Juliet.”

Since the couple’s arrival in 2015, The Georgia Ballet has blossomed into a company marked by softly expressive port de bras, unforced generosity and clean, understated technique. Dancers all wore masks last weekend, but must have been cleared to dance in close proximity to one another — they conveyed a welcome sense of togetherness that has often been absent from many people whose lives are framed by pandemic protocols.

Saturday afternoon’s program started with a clean-lined contemporary duet and came into its own with Jules Perrot’s 1845 Grand Pas de Quatre, a divertissement created to showcase four luminary Romantic ballerinas. Versions are common today and range in degrees of skill and efficacy. In this rendition, each dancer exuded graciousness befitting the role’s originator. And while each artist’s gossamer port de bras and airy suspensions had unique depth and dimension, the four ladies weaved in and out of one another as part of a unified vision.

Kelsey Stanhope and Angel Ramirez followed with the balcony pas de deux from Kenneth MacMillan’s Romeo and Juliet. MacMillan’s style isn’t easy — Ramirez sailed through multiple turns with skill and buoyancy, ever-focused on Stanhope as if she were the center of his universe. Stanhope moved with a supple expressiveness, imbuing her role with youthful spontaneity. MacMillan’s partnering posed a few challenges — lifts requiring the male dancer to thrust Juliet skyward, then arc her downward, would challenge any dancer’s strength and coordination. But never mind. In feeling and action, the pair revealed a sense of the whole tragic love story. Near the end, they replaced MacMillan’s long Hollywood kiss with a brief but heartfelt embrace, yielding into one another as if their lives depended on it.

In the wheat harvest dance from Coppélia, six women and two men revealed a fine sense of ensemble. As the women rose together into arabesque en pointe, their bodies opened like blooming flowers, their charmingly inclined heads and graciously rounded arms breathing new life into the style.

The program jumped the historic timeline to Michel Fokine’s Les Sylphides. This alignment on the program showed how the early 20th-century revolutionary choreographer mined a bygone era to fortify a vocabulary more tightly woven into the swells and cadences of Chopin’s music. Again, the care in coaching was evident in the seamless and lilting way Courtney Walker and Francisco Aguilar embodied the music.

The long-limbed Alexa Goldberg displayed newfound suppleness and lyricism in a solo from Marius Petipa’s The Talisman. In a variation from La Bayadère, a veiled Amber Runyan revealed the heartbroken Nikiya’s sorrow and yearning as she lithely struck an odalisque’s pose — then stretched one leg behind her as she reached forward, torso inclined, only to fold her body inward in resignation. Angel Ramirez followed with Don José’s variation from Carmen.

In a charming finale, Courtney Walker and Francisco Aguilar played lovers Lise and Colas from Frederick Ashton’s version of La Fille Mal Gardée. Near the end, the pair stepped into the center of a circle dance, the hub of a wheel formed by bands of pink ribbon, which six ladies held up from the circle’s perimeter. Supported by Ramirez, Walker curled a perfect attitude around him as he rotated her, then left her alone, balanced on a single pointe. There, holding the ribbons overhead, she pivoted, unwavering, for a full revolution.

This moment seemed a metaphor for The Georgia Ballet, which, in these most unusual of times, has found its central core of strength. And from that center, this group is emanating variegated colors and expressions. Their camaraderie and love of the art form are palpable. The passion and commitment of Rodriguez and Peguero are evident. Last weekend’s simple studio showing conveyed a sense of beauty, expressiveness and physical togetherness that for many people is dearly missed.

The fourth and final showcase, Directors Collection, will run March 20-21.