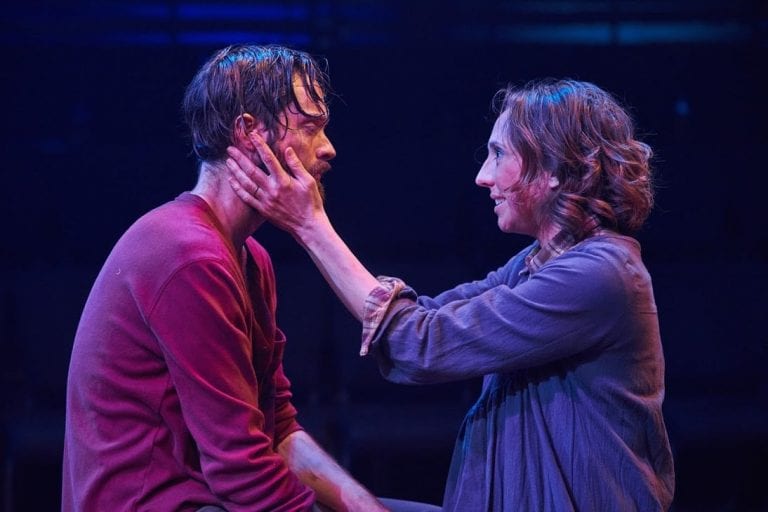 Jonathan Horne and Courtney Patterson excel in The Crucible. (Photo by Christopher Bartelski.)

Review: “The Crucible” at Actor’s Express is a timely, well-staged version of the Miller classic

You couldn’t call it good luck exactly, but there’s a certain degree of fortuitous synchronicity to the timing of the Actor’s Express’ production of Arthur Miller’s harrowing 1953 political drama The Crucible. The production was planned along with the rest of the season almost a year ago, and Miller famously wrote his drama about the Salem witch trials in response to the McCarthy hearings of his own time. But the play’s dangerous atmosphere of political stridency, rampant lies, petty grievances and social hysteria still resonates today. It’s not a play one particularly wants to be timely, or timeless, but there it is.

Indeed, The Crucible dramatizes grim historical realities so well that over the years, it’s been given countless amateur and student productions, some so bad they could effectively be used as torture to extract confessions of witchcraft. A new professional production therefore has to be relentlessly agile, slick and smartly paced, and this is something that director Freddie Ashley understands well. The Crucible is a longish play, as shows tended to be in Miller’s time, but the Actor’s Express production is heart-poundingly absorbing from start to finish.

A good part of the play’s success derives from its sleek look. Pamela Hickey’s strikingly somber set with its bare winter branches and Joseph P. Monaghan III’s dramatically spooky lighting drenched in eerie blues give us a stark and hauntingly evocative Salem. Erik Teague’s inventive costumes are more successful with the men, with their dramatic capes and almost futuristically minimalistic Puritan chic outfits, than the women in drab prairie dresses and hard-to-fathom head kerchiefs. Sound designer and composer Ed Thrower creates ominous rumblings and powerful thunder cracks that effectively underline and punctuate the intensity of the drama. (Still, when coupled with the shrieks of accusation or the clamor of group hysteria, the noise could be so great that it obscured crucial lines, especially at moments of heightened drama at the end of scenes or acts).

A sticking point in Miller’s script is that the two central characters, the Proctors, seem to regard marriage almost as an unpleasant necessity, something the good forbear out of a sense of religious duty. This may be historically accurate, but much of the emotional impact and drama of the final scenes rests on our concern for the imperiled relationship between Elizabeth and John. As far as we can tell by what’s said, they have stayed together for years eating roadkill stew off of chipped plates on a barren table and are willing to go to the scaffold for each other merely because they both want to be understood, by themselves and others, as good people. This makes the Proctors’ situation more tragic but their final actions less moving and heroic.

In the wrong hands, the relationship, and Elizabeth in particular, can seem sexless, passionless, dull, Puritan to the point of personal anonymity and even prissy.

Fortunately, we’re in good hands. The actors, Jonathan Horne and Courtney Patterson, go above and beyond by movingly dramatizing and centralizing the genuine love between the husband and wife. Horne gives us Proctor’s soul-wrenching conflicted nature, and Patterson manages to give her character interesting touches of modernity, thoughtfulness and interiority. It’s a strong cast all around, but I was also intrigued by Bryan Davis’ Danforth, the court’s head honcho — a powerful performance that brings out the subplot of a powerful but vain and cowardly man without the integrity to admit fault or to stop a set of terrible lies once they’ve been set in motion.

The production isn’t just timely; it’s well-done enough that we see a familiar classic with fresh eyes just when we need it most (I had completely forgotten, for example, that racist paranoia plays a significant role in the plot). Lies can accumulate to the point that disentangling them from the truth requires attention, cooperation, insight, bravery, goodness and even sacrifice. Without constant vigilance, these are all qualities that, as Miller understood all too well, can suddenly fall into terrifyingly short supply.