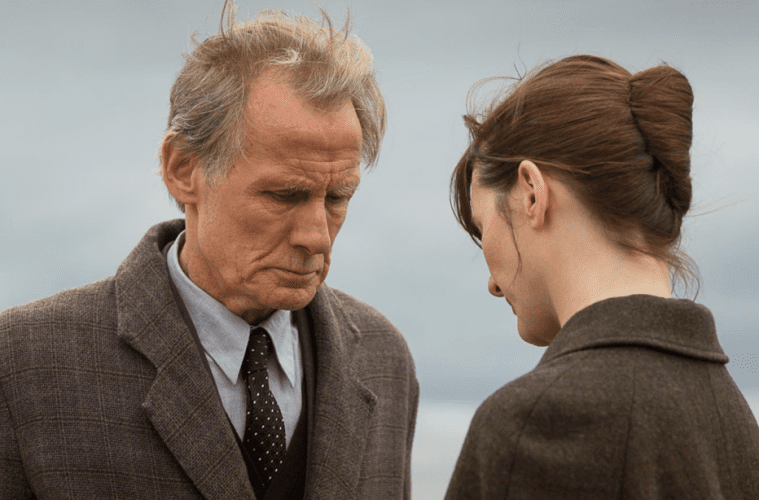 Review: “The Bookshop” is a film that works its charm with a quiet, seductive melancholy

At first glance, it appears to have all the cozy, twee trappings of a predictable Britcom: quaint seaside village, a period setting (it’s 1959), a reclusive but lovable local eccentric, a swank soiree at a grand manor house and a spunky, free-thinking heroine. You might watch the trailer and peg it as the ideal thing to take your sweet Aunt Adelaide to see. But The Bookshop, based on a 1978 novel by Penelope Fitzgerald, has a bitter stream running beneath its idyllic setting.

Emily Mortimer plays village newcomer Florence Green, perky on the surface but still quietly mourning the death, 16 years ago, of her deeply loved husband. She comes to Hardborough not in search of a new partner, but with plans to open a book store in the property known as the Old House. The place has been abandoned for seven years, so Florence, it seems, will be its savior.

What she hasn’t expected is that Hardborough’s grand dame, wealthy Violet Gamart (Patricia Clarkson in one of her patented turns as an elegant viper) thinks the Old House would be the ideal location for an arts and culture center for the town. Never mind that the place is rumored to be haunted and damp, and she has shown no interest in the locale in the years of its abandonment. She seems to see Florence’s initiative as a personal affront and launches a campaign to wrest the property away from the newcomer.

As a result, Florence is continually met with villagers who tell her they understand she is leaving the Old House, and they offer suitable alternate properties. All of this, of course, is a bit of a surprise. Luckily, she has a couple of supporters — Christine (Honor Kneafsey), a schoolgirl who helps Florence in the shop (so long as she doesn’t have to read any of the books herself), and more importantly, Edmund Brundish (Bill Nighy).

A hermit sequestered in a gloriously forbidding stone manse, Brundish has hidden himself away in the decades since the drowning of his young wife. (We will learn this story is one of many things the townsfolk are wrong about, but they prefer their own gossip to the truth about Edmund’s wife.) Rarely seen in town, Brundish sends a message via a local boy to the book shop, inviting Florence to send him any new novels she thinks he might like. Thus, she introduces him to the works of Ray Bradbury, as well as to the scandal-fumed Lolita.

Now, if that detail makes you think The Bookshop will turn into a Brit variant of the silly, “risqué” tone of the recent The Book Club, centered on the 50 Shades of Grey oeuvre, then you’re at the wrong movie.

Mortimer is a fine, solid presence at the film’s center. But the real heart of The Bookshop is Nighy, a revelation for anyone who knows him only for his manic, comic turns in films like Love Actually or the Pirates of the Caribbean franchise. A courtly loner, he takes Florence’s hand during one of the few occasions they meet and says, “I would very much like to have met you at another time in my life — or in another life altogether.” In that moment, you sense the melancholy of missed or thwarted opportunities. That melancholy is the bedrock of the film, and its strength.

Ultimately, The Bookshop dramatizes a kind of very British, quiet, polite asphyxiation. The movie ends with a series of shots of villagers gazing stone-faced out their windows. And you realize what you’ve been watching, instead of the quaint tale of a small, welcoming community, is a withering look at small-town fascism.