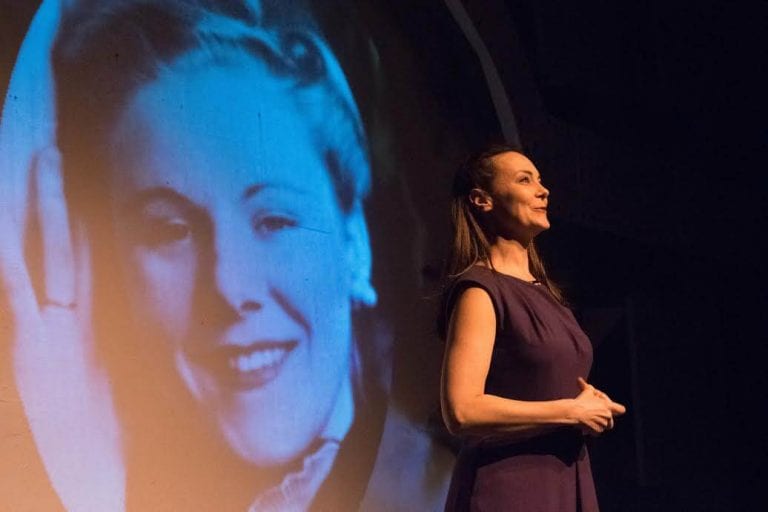 Tara Ochs explores her own upbringing and the racial attitudes she was taught as a child. (Photo by Jake Scott-Hodes/7 Stages.)

Viola Liuzzo left her husband and five children in Detroit to assist civil rights workers in Selma, Alabama, and never came back home. Liuzzo was killed on the day that would become known as Bloody Sunday by Klansmen because she was driving a young black man in her car. Her body was found hanging out of the driver’s side door, and the young man who was with her fled, likely out of fear of losing his own life for being in close proximity to a white woman.

Like the city of Selma itself, Liuzzo is a woman history forgot until her character was portrayed by actress Tara Ochs in the film Selma. In Ochs’ one-woman show White Woman in Progress, she intertwines reflections on her relationship with race and privilege that arose from her experience working on the film Selma with details about Liuzzo’s life. The show, directed by 7 Stages artistic director Heidi S. Howard, runs through April 9.

The meaning of the play’s title stems from Liuzzo’s participation in the civil rights movement and Ochs’ personal journey to acknowledging her own presumptions about people of color. She takes on the characters of her childhood self in a history class, her current self, Viola Liuzzo, her mother, grandmother, Ava DuVernay, Selma residents and a figure called Dr. Racism to tell the story. Her transition from character-to-character is not seamless, and the whole show could afford to slow down a little. There are too many characters for any of them to be distinct, and the jumping back and forth between talking about Liuzzo’s life and her own prevents Ochs from delving deeply into either.

Still, she makes some keen points about the exclusion from the history books of the women who sacrificed themselves for the movement. When Ochs was cast as Liuzzo in Selma, she became fascinated with the idea that someone who looked like Liuzzo played a role in one of the most significant days in American history. But she also questions whether by looking for the white woman in the civil rights movement she is feeding into the system that she wants to overcome. Ochs states in the script, “when there are more murders than martyrs then we make change.” Do white women need a martyr in order to see themselves as activists and in progress? Figuratively speaking, was Viola Liuzzo in 1965 who Hilary Clinton is in 2017?

Ochs also takes care in describing what happened in Selma after the marches and where the city is today, stating “Selma had a happy ending, but Selma did not.” The outline of the Edmund Pettus Bridge looms in the background of the simple set, which has a black chair on stage right and an outline of the infamous bridge against a backdrop painted with gray clouds. Kudos are certainly due to Katherine Neslund for lighting and Michael Haverty for projections for making a bare set come to life.

Ochs does a nice job of generating sympathy for Liuzzo and using funny examples from her own life to cut the tension. She describes a heartbreaking encounter with Liuzzo’s children during the filming of Selma, and recalls a humorous conversation where her mother begs her not to do the show for fear of bringing shame on the family. The play, however, much like the performer, struggles from having a split conscience.

Ochs has written a funny script, but she struggles to change personas without becoming a caricature. Her performance is brave, especially in the parts where she reveals her biases and participation in cultural appropriation. The show is strongest, however, in the moments where Ochs becomes Liuzzo. For history’s sake, it’s a good thing she is telling that story, even with the missteps.