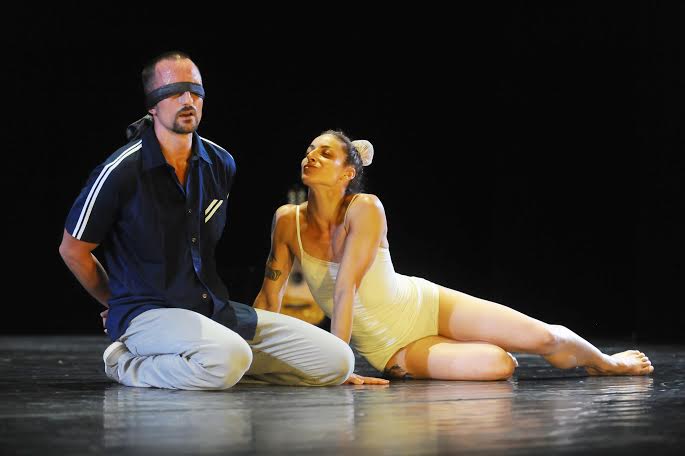 Ship of Fools, a 2011 work for three dancers by Israeli choreographers Niv Sheinfeld and Oren Laor, had its American premiere in Atlanta last weekend as part of the Tanz Farm series of performances created by glo and the Goat Farm Arts Center.

It’s a provocative, radioactive work that evokes multiple and often contradictory tones. Its very subject often seems to be the uncertainty and instability of the relationship between viewers and performers.

The work is over four years old, but the original artists — Sascha Engel, Anat Grigorio and Uri Shafir — still seem to be approaching the piece with a sense of honesty, curiosity and discovery, one of the work’s strongest aspects.

Images range from the blatantly political (the dancers reenact a 2010 incident in which a female Israeli soldier took photos of herself smiling in front of blindfolded Palestinian prisoners) to the defiantly frivolous and absurd (the dancers perform the famous moves to Michael Jackson’s “Billie Jean”). Engel and Shafir in Ship of Fools.

At one point, Grigorio imperiously commands the male dancers to facilitate her graceful balletic movements, and they humbly, clumsily, obey. In the show’s funniest and strangest scene, Shafir directs the other two dancers to create a maudlin ceremonial enactment of his own funeral.

In an early scene, Shafir gently leads the viewers in a sing-along to a cheesy ABBA song about friendship, but later he holds the acoustic guitar as a machine gun, disturbingly pantomiming a massacre of the audience.

There’s an unsettled and unsettling quality in the viewer’s vacillating reactions to all the show’s shifting vignettes. Each act is spiked with barbs of its tonal opposite and not even the artists themselves seem entirely certain of what effect the little grenades they’re lobbing will have.

In Ship of Fools there seems to be a self-conscious and self-critical eye zeroing in on the act of performance itself. The “ship of fools” could be the space of the theater, performer and viewer shutting themselves into darkened, sequestered space in order to sail away into unchartered, imaginative territory.

Full of disillusionment and troubling ambiguity, Ship of Fools creates a fascinating journey.