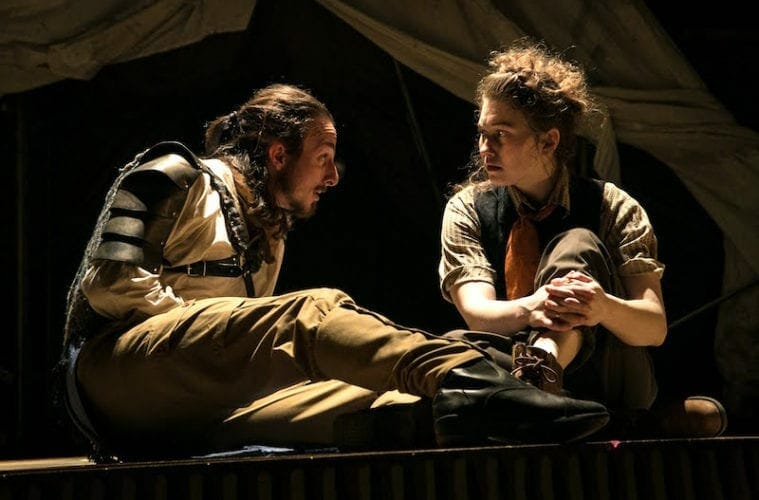 Benedetto Robinson (left) is Thorin the Dwarf King and Brooke Owens is Bilbo Baggins in Synchronicity Theatre's five-person telling of the epic "The Hobbit." The play with music runs through February 23. (Photos by Casey Gardner)

Review: Synchronicity’s inventive “Hobbit” comes up short in its storytelling and score

Though it shines in moments, like a ring discovered in a dark cave, Synchronicity Theatre’s The Hobbit is a quirky, uneven piece that doesn’t succeed at telling its story clearly. It’s onstage at the Midtown theater through February 23.

Sure, aside from the younger children at which it’s primarily aimed, most theatergoers will already know the story of Bilbo Baggins, either because of the J.R.R. Tolkien novel or the six Peter Jackson-directed movies set in the fantasy realm of Middle-earth. But, with this telling and its cast of five playing nearly every role in the story, it’s sometimes very confusing to follow the unexpected journey as it goes there and back again. As Gandalf the wizard, Ash Anderson spends much of the show on stilts.

Bilbo Baggins is a hobbit who lives in a neighborhood called The Shire, where he says he’s perfectly content with a full belly and a quiet life. Yet a wizard named Gandalf, sensing that Bilbo might be fit for adventure, lands at the hobbit’s doorstep with a proposition. The wizard recruits him to join an army of dwarves as they attempt to reclaim their homeland in the Lonely Mountain from a dragon named Smaug, who hoards the treasure he stole from them. Along the way, Bilbo discovers how to be savvy, confident and resourceful, and even finds a magic ring that helps him disappear and become a better thief.

This Hobbit’s biggest strengths are its dedicated actors, the acrobatics and the fight choreography. Director Jake Guinn and the Havoc Movement Company deserve credit for creating a show full of impressive practical stunts. When characters flip their way onstage or enter wearing stilts, it enlivens the narrative. As the dwarves tumble their way into Bilbo’s peaceful existence, the actors dangle from rafters and flip their way across the stage.

The climactic Battle of the Five Armies is electric and thrilling, full of swords and combat. In those moments, you may forget you’re watching only five people on a smallish stage –it’s the best scene in the show.

Clearly, the performers are lively and fully committed. Brooke Owens makes a charming Bilbo, particularly when she’s fussy and contrary. She’s charged with engaging the kids in the audience and guiding them — in narration — through this complicated world-building. It’s not an easy job, and Owens quickly manages to get her young audience’s trust and loyalty. She has a tougher job as her Bilbo gains the ring, becoming more conflicted and less trustworthy. Act 2 asks her to carry the focus and narration behind much of the story, and confusion follows. Blame the script though, not the performer.

Kids in the opening-night audience cheered loudest for Bilbo, and the casting of Owens allowed girls to see themselves as the hero of a favorite story.

Ash Anderson plays multiple roles and steals every scene, both as Gandalf the Wizard and the vicious Gollum — the hissing, weird creature that Bilbo encounters in a cave. The Gollum scene is an Act 1 highlight, a two-performer battle of wits. Anderson crouches and slithers, eyes costumed in goggles, low stage lights casting the character in eerie shadows. In every telling of The Hobbit, Gollum always goes away too quickly.

Actors Ryan Vo and Tennison Barry bring goofy energy to the other characters. They play two of the named dwarves and, in a running gag, point out to the audience when counting any of the others. Benedetto Robinson, primarily playing Thorin the Dwarf King, is arrogant and prideful. His character’s motivations and moods change frequently in Act 2, however, and it’s not always easy to figure out why. The company of “The Hobbit” (from left) is Ryan Vo, Ash Anderson, Benedetto Robinson, Brooke Owens and Tennison Barry.

The Greg Banks script is the main problem. Too much of it relies on the audience having prior knowledge of the material. The world-building it provides is clunky. There has to be a more engaging way to tell this story with these characters. Instead, many important points — like The Arkenstone — feel name-dropped without a sense of what they are or why they matter.

There’s music here, too, and it’s clumsy. Syncopated narration arrives randomly alongside the regular narration. It doesn’t delve into the characters’ inner desires or add any layers to the story.

And instead of a moment where we fully see Smaug in all his glory, we get a claw, an eye and a megaphone and are asked to imagine the rest. The climax of the entire Smaug adventure happens offstage while the characters watch and describe what they see.

Middle-earth would have been a tremendous sight. The Hobbit, unfortunately, tells much more than it shows.