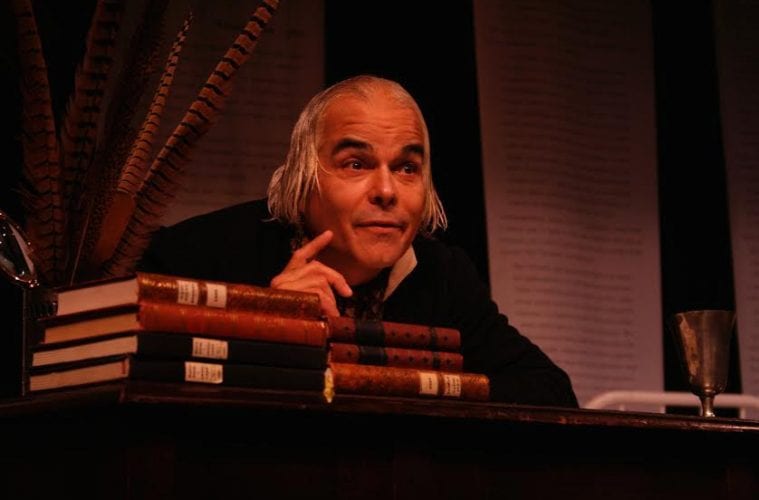 Review: “Diary of a Madman” reveals a descent with sly, dark humor

The most unreliable of unreliable narrators is one who can’t actually distinguish truth from fiction. So it is with Poprishchin, who famously loses his grip on reality in the great Russian writer Nikolai Gogol’s 1835 short story Diary of a Madman. An interesting dramatic version of the classic work, the production by Metropolis Theater currently running at Synchronicity Theatre through June 5, brings the character vividly to life.

In the story, we’re as close and intimate as one can get to the interior of someone else’s mind; we’re reading Poprishchin’s diary as the moorings of his sanity come loose. Actor Jon Hayden gives the role, in which diary pages become monologue, compelling life. At first, things seem ordinary enough (if pretty bleak in that 19th-century Russian way). Poprishchin is a timid, middle-aged clerk, whose greatest and most exciting accomplishment in life so far is being promoted to a position where he has been given the responsibility of sharpening the boss’ quills.

He falls hopelessly in love with the boss’ beautiful young daughter (again, “hopeless” in the Russian way: she’s so out of his league, it’s laughable, and he’s such a schlemiel he can barely string three words together in a row when she’s around). We start to suspect things are more than a little bit off when Poprishchin intercepts letters from his crush’s dog to a neighbor’s pet and, well, quotes them to us. Things descend from there, and Poprishchin gives us an unself-conscious picture of his descent into madness as he begins to believe he’s no ordinary clerk, but the unacknowledged king of Spain. As a narrator, he may not accurately see his breakup or the reaction of the people around him, but we do.

The sparse set with a few evocative pieces of 19th-century furniture becomes, variously, Poprishchin’s office, his bedroom, the asylum and so on. As a backdrop, it features scrolling pages of Poprishchin’s diary, a simple but nicely contemporary, self-reflexive touch.

Directed by Prodan Dimov, Hayden perfectly captures Gogol’s bleak humor and generally pessimistic outlook on human affairs through his confident and intimate recounting of events that he’s not perceiving accurately. Perhaps because the words are performed instead of read, his Poprishchin lacks some of the initial timidity, social invisibility and ineffectualness that are crucial aspects of the character at the outset. This Poprishchin seems bold and demonstrative from the beginning, so we don’t feel we witness a complete transformation from pathetic, alienated social loser to deluded imperious monarch.

Still, as in the story, we long to trust the vision of the teller, but we have no other guideposts other than Poprishchin’s words themselves. It’s an irony that Hayden captures well, and Gogol’s slyly bleak humor emerges with clarity and immediacy. Ultimately, Hayden gives the great short story and its events vivid, compact life.