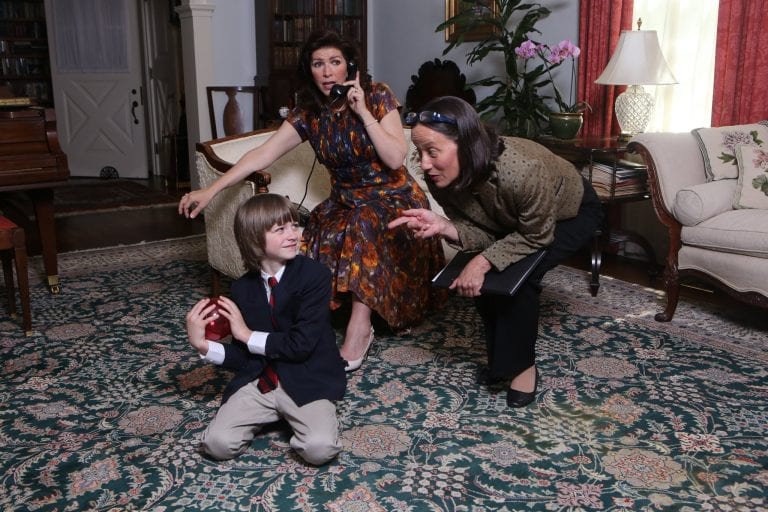 Tess Kincaid (on phone) and Carolyn Cook lead a stellar cast in The City of Conversation.

Anthony Giardina’s The City of Conversation is a period piece not only for its era (the play starts in the late Seventies), but for its fond recollection of a time when Republicans and Democrats could actually disagree on policy yet still co-exist and socialize together. The play itself is a little too top-heavy in its intentions, but it’s still often fascinating. Running through June 26 at Horizon Theatre, this version is sparked by a superb cast wrangled up by director Justin Anderson.

This Washington-set drama, an Off-Broadway hit from 2014, begins with Jimmy Carter in office and ends during the Obama administration. Hester Ferris (Tess Malis Kincaid) is a liberal who delights in hosting politicians in the Georgetown home that she shares with her widowed sister Jean (Carolyn Cook), who has become almost subservient. Hester’s son Colin (Justin Walker) unexpectedly returns from the London School of Economics one afternoon with Anna Fitzgerald (Rachel Garner), a young woman he has met and plans to marry. She’s an uber-ambitious type who wants to crash the night for her own professional advantage.

There’s friction between Hester and Anna almost immediately, including an All About Eve homage. The party that Hester has envisioned, in which she is hosting Senator George Mallonee (Allan Edwards) and his wife Carolyn (Deborah Bowman), doesn’t wind up heading the way she plans.

In the second act, set in the Reagan Era, Colin is employed by a Republican senator and Anna is with the Justice Department. Hester has been hard at work herself trying to keep Robert Bork off the Supreme Court, and it’s an issue she and her son and daughter-in-law don’t agree on. Matters gets nasty, which takes Hester aback. She simply isn’t used to political disagreements with long-lasting repercussions.

The City of Conversation is certainly a topical play. At one point a character mentions that presidents are supposed to nominate Supreme Court justices, a line which drew chuckles on opening night. After a busy first scene that suggests what follows might be a little farcical, The City of Conversation turns darker and tougher. It also manages to combine sly humor with some emotional family moments.

Unfortunately, Giardina’s narrative is too ambitious and loaded with characters that never develop needed layers. Edwards and Bowman have a droll time as guests at Hester’s house. It’s a shame that these two are relegated to just one scene.

As she ascends in power, Anna becomes the easy villain. The play would have been much sharper had the piece been a bit more balanced and not so much in Hester’s corner.

Yet what is here is an intelligent piece of theater. It’s also insightful and nostalgic, sprinkled with sharp dialogue and performers who know how to deliver it. As Senator Chandler Harris, Hester’s other half, Chris Kayser enjoys the opportunity to be loose and funny. Cook graciously takes on a supporting character who doesn’t have much depth. Yet she infuses Jean with warmth and sensibility, and has a glorious final scene that lets her display her comic touch.

At the core of the story, though, is the line between politics and personal matters. The stakes get incredibly high for Hester. Her bouts with Anna are taut and well-handled. Garner is magnetic here — and her character is unapologetic in her drive. Luckily, the actress isn’t afraid to show the character’s ugly side, resorting to a drastic moment when she doesn’t get her political way.

If some of the supporting players don’t have dimensions, Hester Ferris certainly does. Kincaid hasn’t been this electric onstage since her role in the Alliance Theatre’s August: Osage County. Her Hester is proud and defiantly old-school, used to a time when voicing opinions and stances was much more innocent.

What holds this all together is Anderson. From last year’s Vanya and Sonia and Masha and Spike, staged by Horizon, to this season’s Into the Woods at Aurora Theatre, he is on a roll. This is confident work that slowly builds its way up to a bruising confrontation.

The scenic design is by — no surprise — Moriah and Isabel Curley-Clay, the sisters who do practically every other set around town, and do them effectively and thoughtfully. Hester’s Georgetown townhouse is cozy and inviting — perfect for dinner parties — and her walls are filled, literally, with photos from her past glory years.

A relatively brief third act set in 2009, introducing a new character, is sentimental but harmless, giving some of the characters a bit of closure.

Perfect it’s not, but even with its flaws, The City of Conversation turns out to be an enthralling and complex political comedy/drama.