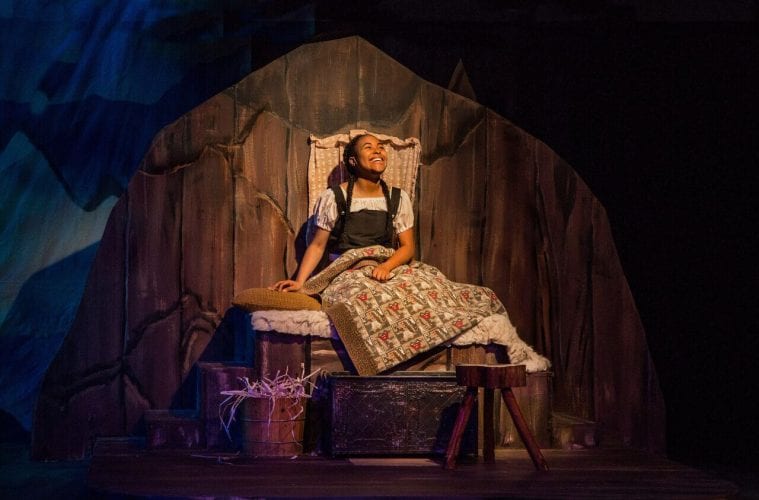 Review: Sychronicity’s “Heidi” offers a fun and nostalgia-filled holiday trip to the Alps

One of the most popular and beloved books of all time — Johanna Spyri’s Heidi — has been the basis for countless television and film adaptations, but a stage version doesn’t seem like a natural evolution, especially with its mountaintop backdrop. Nonetheless, Synchronicity Theatre has dusted off a version for the holiday season. Running through December 31, this musical can be a little clunky but for the most part is a good-natured, impressively performed production.

In adapting the novel, Martha King de Silva has condensed the 280-page book, unable to accommodate every nuance and plot turn. Still, the essence of the story is still there.

An orphaned young girl raised (at first) by her Aunt Dete (Julie Trammel) in Switzerland, young Heidi (Jessenia Ingram) is taken to live in the Alps with her paternal grandfather (Alex Van), whom she doesn’t have much of a relationship with. Nicknamed “Alp,” the grandfather lives in seclusion and isn’t pleased with Heidi interrupting his life. He grows to like her, though, and Heidi herself makes friends with the young goatherd Peter (Patrick Wade).

Some years later, Heidi is taken to Frankfurt to be the companion of wheelchair bound Clara (Emily Parrish Stembridge). Despite the fact that the two girls bond, Clara’s housekeeper Fran Rottenmeier (Trammel again) feels the visitor is a disruption. Eventually, Heidi gets a little homesick for the mountains.

This version of the musical had its world premiere in 2009 at Imagination Stage in Bethesda, Maryland, and has been staged sporadically since that time. It’s had a low profile, however. If you’ve not heard of it, don’t feel alone.

As directed by Julie Skrzypek, Heidi includes some nice choreography by Ricardo Aponte. It’s a show that runs just over 90 minutes and is chock full of music, with songs and lyrics by Joan Cushing. The songs themselves are a mixed lot. Some of the score feels abbreviated and underdeveloped. Others click, though, like the bouncy, busy opener, “A Typical Day in Maienfeld.” Another memorable musical number is the empowering “The Wind in My Hair,” performed by Ingram and Stembridge.

Elizabeth Jarrett’s set is fairly modest and unelaborate but effectively depicts Heidi’s mountainous home and Clara’s more elaborate one back in Germany. Derrick Vanmeter handles costumes and puppet design, including a litany of animals that pop up. If the show doesn’t feel as theatrical as it needs to be, at least the cast makes it believable. Ingram is more comfortable with her singing than her acting, but she does get the character’s sunny optimism in the face of some tragic times. Van is a fine grumpy grandfather, and Wade is also convincing as moody Peter, one moment laid-back and friendly and the next hurling a wheelchair down a mountain. Trammel (with perhaps the production’s sharpest voice) and Stembridge also connect, although Trammel’s take of Fran Rottenmeier borders on a caricature.

It’s been a stellar year for Synchronicity, whose Eclipsed won several Suzi Bass awards recently. The company’s artistic director, Rachel May, has commented that this show fits into her season because of its theme of love overcoming the political and the different.

Truth be told, Heidi isn’t nearly as satisfying as the company’s frequently staged, universal A Year with Frog and Toad. Yet younger audience members will lap it up and their adults will probably enjoy its simplistic, nostalgic vibe.