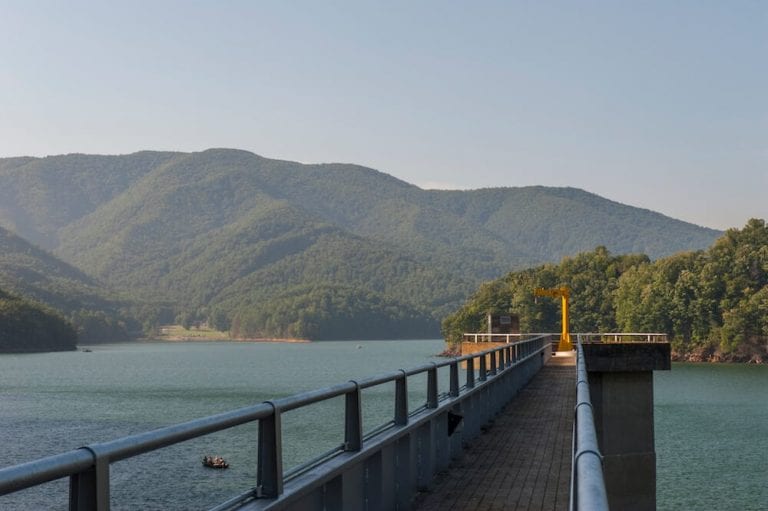 Photographer Micah Cash will speak this week about his new book of images documenting the infrastructure of the Tennessee Valley Authority. (Photo: Watauga Reservoir by Micah Cash)

Dar Williams, What I Found in a Thousand Towns. The singer-songwriter reads from and discusses her latest book alongside performances of her songs. December 14 at 7:30 p.m. Eddie’s Attic.

Miracle on 34th Street. The Fabulous Fox screens the 1947 holiday classic with music from the Mighty Mo organ before the show. December 19 at 7:30 p.m. Fox Theatre.

The Other Side of Hope. Finnish director Aki Kaurismäki’s new film tells the story of a former traveling rep salesman who is seeking to break into the restaurant business when he decides to help a refugee from Aleppo. Opens December 15. Landmark Midtown Art Cinema.

Krista Clark: Pause of Construction. The recent MFA graduate from GSU creates a new installation of cut paper and drawings. Through December 22. Poem 88.

Christmas with Jennifer Nettles & the Atlanta Symphony Orchestra. The Georgia-native singer performs songs from her holiday album To Celebrate Christmas backed by the ASO. December 20 at 7:30 p.m. Symphony Hall.

Leslie Jordan: Exposed! Will and Grace‘s Leslie Jordan performs his one-man show based on his eccentric Tennessee upbringing and subsequent adventures in film and television. December 14–16. Out Front Theatre.

The First Noel. True Colors’ Christmas musical tells the story of three generations of a Harlem family that receives an unexpected visitor bringing some long-absent Christmas joy after the loss of a loved one. Through December 24. Ferst Center for the Arts.

Miss Bennet: Christmas at Pemberley. Decatur-native playwright Lauren Gunderson’s new play imagines the characters from Pride and Prejudice at Christmas shortly after the action of Jane Austen’s novel and centers on Mary Bennett, the bookish and often-overshadowed middle sister. Through December 24. Theatrical Outfit.