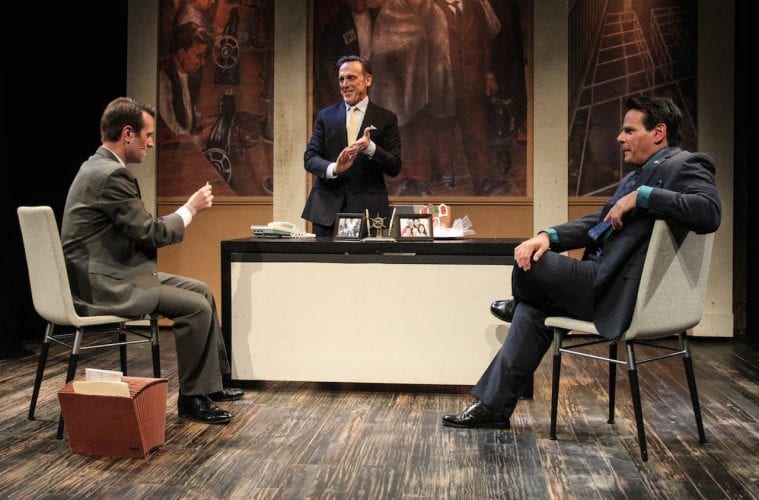 Review: “Storefront Church” boasts great acting in a play that seems to try too hard to succeed Tom Key, center, turns in a stellar performance as the bank president. (Photos by BreeAnne Clowdus)

Storefront Church is the third play in John Patrick Shanley’s lugubriously named Church and State trilogy, only the first of which, Doubt — which won the Pulitzer Prize and was made into a film with Phillip Seymour Hoffman and Meryl Streep — is likely familiar to Atlanta audiences.

I don’t believe that the second, Defiance, has had an Atlanta production, but the third is now on stage at Theatrical Outfit through April 26. The various parts of the trilogy are thematically related, rather than continuing with the stories of the characters from the first part.

Storefront Church is set in a down-and-out Bronx neighborhood where Jessie (Donna Biscoe) has fallen behind on her mortgage payments because she’s subleased her downstairs storefront space to a preacher (E. Roger Mitchell) who hasn’t opened his church yet or even passed a collection plate.

Her husband Ethan (Clayton Landey) makes a desperate appeal to the bank functionary Reed (Joe Knezevich) in order to save their home, and she likewise makes her appeal to the Bronx borough president Donaldo (Anthony Rodriguez), who is also a personal friend. Because of his position and the favors he can do, Donaldo is able to bring her concerns to the bank president (Tom Key) and as events turn, all the characters end up in the storefront church for a Sunday service. Storefront Church certainly contains some of Atlanta’s finest acting talent, but the play itself is so leaden they can’t lift it off the ground. Shanley has everything, all of the play’s elements in every scene, spell out Serious, Topical Drama. Ultimately, that feels too transparent and effortful for us to get lost in the drama.

Act I is surprisingly short; I think the audience was surprised when the lights came up when they did, and Act II is likewise pretty brief. But even short, the play’s scenes, especially the final one, seem to drag on for way too long.

We can see the easy and obvious denouement — that some sort of renewal, hope and sense of community, even of a slightly bleak, contemporary kind, will come to the characters in the storefront church — coming from a million miles away.

A regular theatergoer could probably predict the show’s ending and its tone just from hearing the title alone. I’m not sure what that says about the show and contemporary theater, but it probably isn’t good.

I especially admired Tom Key as the bank’s top brass, sneakily breaking off hunks of a gingerbread house meant for his son as he discusses the fate of a woman behind on her mortgage. Joe Knezevich makes for an interesting bank functionary with a terrible past, and Clayton Landey is fantastic as the out-of-luck husband begging him to be a mensch.

I was even surprised to find that I liked the directorial addition of contemporary pop ballads and between-scene views of the characters in moments of isolated contemplation, but ultimately they don’t add enough to save the central drama.

In the end, the script’s juxtaposition of big business and religion feels too easy, obvious and superficial. There’s too much authorial manipulation for the ending — in which all the disparate characters gather in the storefront church — to be believable or genuinely moving.