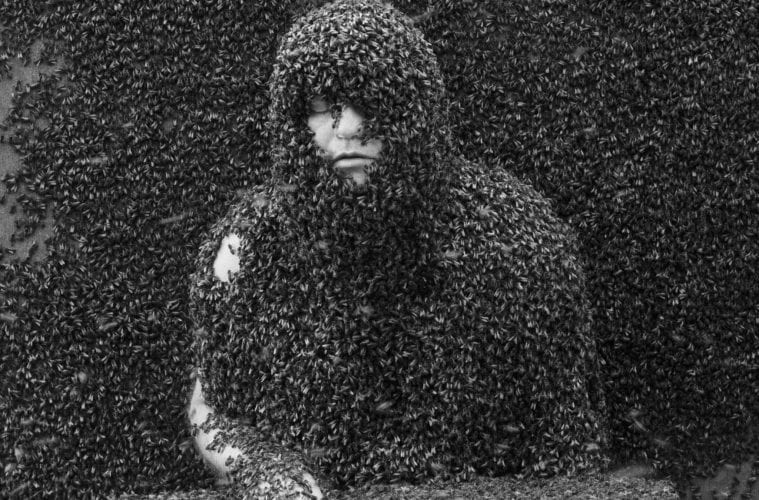 We can come very close to stillness, but we can’t reach that absolute-zero point. Some part of us is constantly in motion, whether on a molecular or physiological level. If we hold our breath and stay as immobile as we can, our heart still beats and blood still flows through our body. Even at the moment of death, arguably the most still a body can get, bacteria break down the cells in a kinetic transformation.

Stillness, then, is a relative concept: a way to slow down, to remove distraction, to think and consider what it is to be alive, and then pick up where we left off and continue moving forward in our lives. In other words: to pause.

Pause, on view at Zuckerman Museum of Art (KSU) through June 6, asks viewers to consider this very (in)action. Curators Teresa Bramlette Reeves and Kirstie Tepper selected more than 60 works one might loosely call portraits in which artists attempt to alter time.

There are moments when Pause doesn’t quite reach its absolute-zero point, but overall the exhibition is smart, diverse, well thought out and successful in its aims.

Stillness cannot truly be understood without a complementary understanding of movement, which Reeves acknowledges in her catalog essay. In fact, watching a YouTube video of jookin’ dancer Lil Buck performing an interpretive dance accompanied by classical cellist Yo-Yo Ma was the inspiration for the show. The relationship between extended pause and movement is a recurrent theme, and is where the curation shines brightest. The juxtapositions of artwork within the galleries is particularly thought provoking. The bright green and red patterned background of Thiogo Oliveira do Rosario Rozendo, Kehinde Wiley’s classical-style painting of a young contemporary African American man optically vibrates thanks to an effect called chromostereopsis.

Wiley’s work is placed next to historical portraits both painted and photographed, and the viewer “vibrates” back and forth through time like the colors in Wiley’s painting.

A video opposite Wiley’s painting is Jeroen Eisinga’s contribution to the art of bee-bearding. Springtime shows a man with a box containing a queen bee under his chin. The queen attracts thousands of bees whose swarming bodies create the effect of a beard.

The insects vibrate silently as the subject tries to remain as still as possible to minimize the number of stings. As he slowly becomes engulfed in bees, he gazes at the viewer as if to ask, “Could you be as still?”

No, thank you. I don’t think I could.

Nearby, a husky voice lures you to a dark corner where Andre Keichian’s video Desperado depicts a woman in the midst of a gender change who sings the Eagles’ classic “Desperado” in a low pitch enabled by hormone injections. The disconnect between a singing voice that could be a man’s and the subject’s soft androgynous features is a discomfiting subversion of the traditional binary of the sexes.

The discomfort is heightened by Christina A. West’s Pause, a seven-foot, mostly white sculpture of a partially nude woman clutching around her shoulders an open-fronted button-down shirt as if it were a shawl. Her breasts are partially covered (or exposed) but from the waist down she is nude. This intermediary state of dress portrays an ambiguous modesty that acknowledges the viewer’s potential discomfort at viewing nudity, but not the figure’s own. The result is a “vibration” between states of comfort and discomfort, expectation and surprise.

The figure’s lower legs and the walls nearby are a painted a bold blue. This gives the effect of a mythological giant wading through a contemporary sea, turning away from (or toward) Keichian’s siren “Desperado.” A video projection of a pair of human eyes, which blink occasionally, introduce movement in the otherwise immobile statue. But the realism of the eyes is diluted because the sculpture’s surface absorbs much of the reflected light, leaving a soft, ghostlike image that isn’t quite real and isn’t quite ephemeral — like an almost forgotten memory, or a not-fully-formed thought.

Pause asks the viewer to consider how “the current moment is, in stillness, simultaneously looking to the past, present, and future.” Not all “times” are equally represented. The past gets the most play, through not only the 19th-century photographic portraits and historical paintings but also the idea that the artists made the work in the past.

Moving from the past to the present is represented by the viewer walking through the galleries experiencing the art, but also the artworks themselves, which ask the viewer to think back and consider when, at some point, the artist’s “present” was simultaneous with the artwork’s subject. The future is less tangible. Perhaps the most visible incarnation of the concept of “future” are the selfie-sites — colorful vinyl in the shape of empty picture frames on various walls — which invite visitors to take their own portrait and upload it to social media. A modern-day Kodak Picture Spot.

This is a clever way to project time forward to the point when visitors will post their selfies, but it seems more like a marketing tactic than an integral part of the show, especially because mediated portraiture and the selfie effect on art is not discussed in the catalog. A missed opportunity, in my opinion.

The museum’s educational efforts are commendable, offering numerous entry points and educational opportunities: a sleek catalog with thoughtful critical essays by curators Reeves and Tepper, Faith McClure and David Bissell and Gillian Fuller; ample explanatory wall texts in the galleries that include remote-control-style icons that sort works by theme; pamphlets for grade-schoolers.

Pause is multidimensional and intellectually robust, and can be forgiven if its ambitious thematic overture misses a note or two.