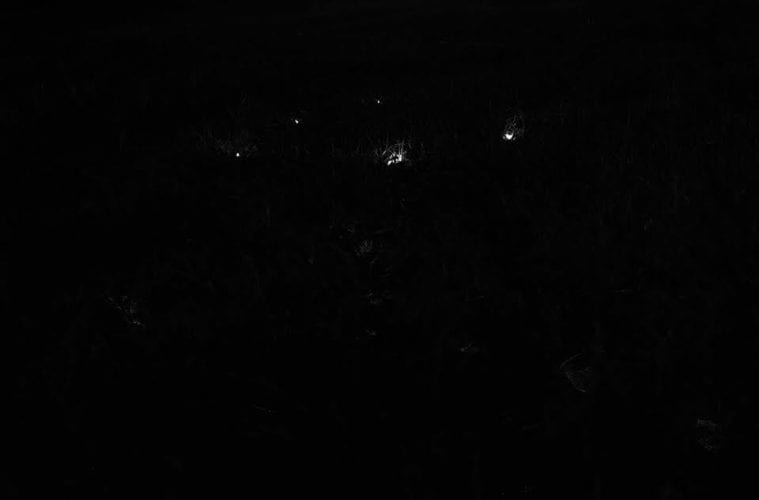 There is a spectral quality to Traces, Stephanie Dowda’s show of black-and-white archival prints and contact prints at Whitespace Gallery, and for good reason. Dowda made the images, all from the past two years, in response to her experience of the progression of her mother’s cancer and eventual passing.

Evoking quarter plate daguerreotypes, the exhibition’s most effective works are seven 10”x 10” gelatin silver contact prints made from negatives that Dowda marked and creased before shooting and whose arrangement seems to suggest a narrative chronology. Their deliberately scarred surfaces deliver an unvarnished sense of immediacy, of time marked rather than spent, and most effectively capture the idea of unmediated grief — what it looks like, what it feels like and most especially how it changes everything — suggesting that in such times we are all romantics, experiencing, as these artists did, human emotion in the natural world. First Crease best exemplifies this idea. In it, a landscape, wintry regardless of the actual season, is shrouded in fog and carries the emotional experience of the same, the fog, for instance, of loss, of depression or disillusionment. Others carry the same weight. In The Scar Is Revealed (2015), scattered limbs and branches “stitch” a fall wood covered in leaves. The landscape in A Lapis (2015) is Sally Mann-esque, every bit as haunted and freighted with memory as her reproductions of Civil War battle sites made from old glass negatives. In it, creases cover the image, almost becoming the image, like the warp and weft of a loom as if Dowda is trying to ensnare something — or at least put it back together.

Larger archival prints, at 43”x 51”, lose some of the immediacy possessed by the contact prints. The same creases writ large can be distracting and appear dominant to, or at least distinct from, the view beneath them rather than a part of it, though maybe that is the point. The larger prints do, however, maintain the same sense of loss or loss of direction. Dowda made many of these images — the larger ones of ponds, full or half-drained, and an old barn — while in residency at the Vermont Studio Center, wandering herself.  In all of them, there is something of the feel of walking in the woods and suddenly realizing that you have lost your way. According to Dowda, the 19 images in Traces comprise two separate bodies of work: 33 Marks, all dated 2015 or 2016, and Evoco, all dated 2017, yet the work in the two is more or less visually seamless and could easily be viewed as a single exhibition. It is easy to suppose that the latter must have been made after and in response to the death of her mother, and the former in response to the experience of going through the illness, but it turns out that all were made following her death.

In Evoco — if as presumed, the distinction is to be made that those works occupying the second gallery space are a separate body of work — Dowda incorporates hand-blown glass made in the style of the Claude glass, which she refers to in her statement as “the forgotten instrument of artists and the occult.” Claude glass, named for Claude Lorrain, a 17th-century landscape painter, was the name given by late 18th- and early 19th-century landscape artists to the blackened, slightly convex pocket mirrors used to reduce tonal values and which served as a form of camera obscura when looking at the view behind one’s head.

Dowda mounts hers on the wall onto the surface of the photographs as if “tacking” them to the wall. Though they do suggest the idea of the magical, the occult, a black “crystal” ball for divination or seeing into the beyond, their presence doesn’t really add to an appreciation of the photographs. These are stirring enough as they are. The glass is beautiful and mysterious and a fine allusion to the idea of conjuring a lost loved one, but Dowda’s images are profound enough to make the glass seem unnecessary. She does use the notion in interesting technical ways. In some, Dowda replaced the traditional camera mirror with a blackened mirror so that light passed through the negative first, capturing the image reflected in the glass. Message and Listening both bear a near-abstract mystery. Others, Extinct Constellation Alter, with lightning bug-like flashes of light in night-darkened grass, and Raised, Ethereal Thing, all from 2017, an eponymously named photograph that captures pentagrams of light and a country manor dreaming itself, are just plain beautiful.

In a statement for an earlier body of work on hand in the gallery, Dowda describes her landscapes as designed to “go beyond representational landscape to capture the experience left behind in the land.” If it is true that the natural world holds emotions and memories, and this writer certainly believes this to be true, it is also true that we endow the natural world with our own emotion. These photos stand as an exploration of what emotion she herself projected onto the world she saw around her, and they stand as proof that there is beauty to be found even, and maybe most especially, in the darkest periods of grief, and proof to the value of sharing it with others.

Dowda’s show at Whitespace will last through February 11, 2017. There will be an artist’s talk this Saturday, January 14 at 4 p.m. Following the talk, there will be an extended opening reception due to the inclement weather last weekend.