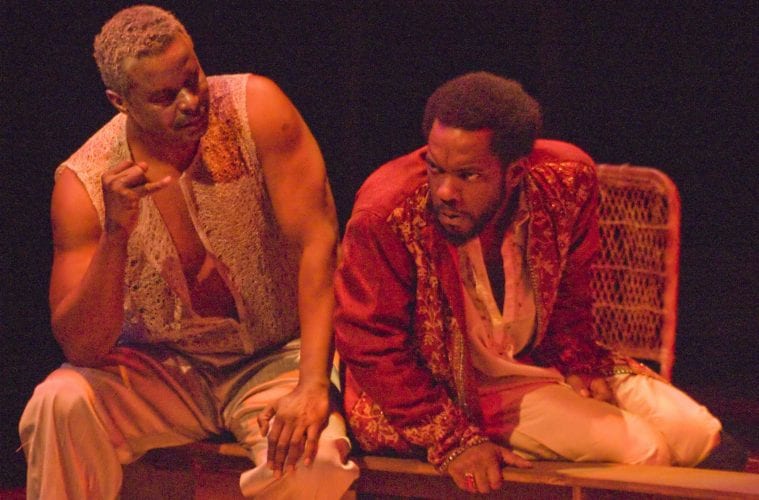 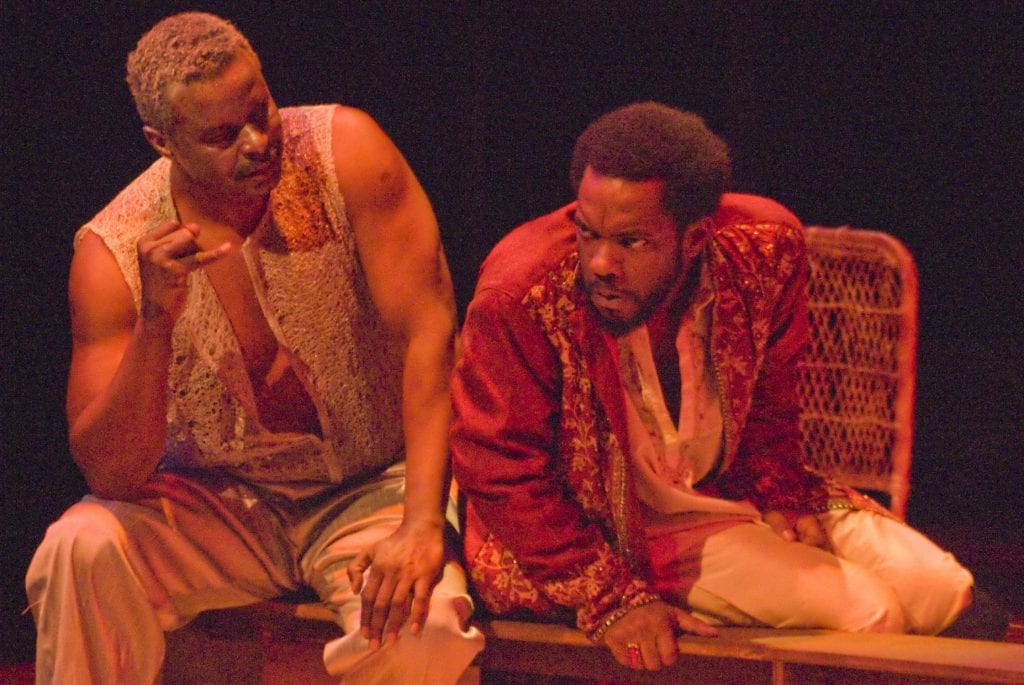 Victor Love (left) as Hecate and Neal A. Ghant as Macbeth. (Photo by Bill DeLoach)

In some ways, Macbeth and Lady Macbeth are the perfect couple. They’re both ambitious, they know each other incredibly well (right down to their hidden strengths and secret weaknesses), and they even work together as a great team. Atlanta nights are getting darker and colder as we approach Halloween, so it’s the perfect time to check out Shakespeare’s darkest, bloodiest play, “Macbeth,” on stage at Georgia Shakespeare through October 28, to see exactly how this seemingly great pairing becomes the source of so much that goes terribly, terribly wrong.

Neal A. Ghant is a real standout as Macbeth. He doesn’t just match emotion to the text; he’s always very present in the language, evoking that sense of complicated, changing, indecisive human interiority that’s at the heart of Shakespeare. We see the temptation, the doubt, the guilt, the confidence and the nihilism play out in the character in both body and speech in a way that’s utterly compelling.

Cynthia D. Barker is a wonderfully manipulative Lady Macbeth. At first, Barker seems too kind and gentle a stage presence for the part. When reading Macbeth’s letter in her first scene, she seems too youthful and openhearted, but she ends up making an interesting and believable journey from young trophy wife to murderous diva.

Ghant and Barker both always keep the characters recognizably human: the villainy is never caricatured. Macbeth and his wife may do things that are monstrous, but in the end they’re not monsters. Their guilt, their conscience, their humanity bites back with a vengeance, and this the two leads capture with straightforward, plain-speaking clarity.

Unfortunately, there’s a jumbled aesthetic in the directorial approach that leads to an overall hit-or-miss quality in the show’s various elements. This joint production by Georgia Shakespeare and the National Black Arts Festival references a famous 1936 New York production by Orson Welles, which utilized an entirely black cast and moved the setting from Scotland to the Caribbean (with the witches as voodoo priestesses and the thanes as leaders of an early slave rebellion and so on). The show was a huge hit, gathering all the force of a cultural watershed moment, and it’s an interesting production to dig up.

But director Raelle Myrick-Hodges approaches that production’s innovations with a “dipping-the-foot-in” timidity without ever really diving in. Perhaps detecting a bit of trouble in the old-fashioned post-colonial romanticism, the show’s producers at Georgia Shakespeare seemingly try to have their rum cake and eat it too, leaving us with a show that’s confusingly high-concept and low-concept at the same time.

We’re in the Caribbean, but not quite. We hear reggae music, and at other times American neo-folk. Although there are lots of great innovations — Sergeant Caithness becomes a photojournalist, a sleepwalking Lady Macbeth is wheeled onstage in a strangely surreal medical contraption — there’s a jumbled, un-unified cumulative effect to such disparate elements.

Music, voice manipulation and projection often overlap the speech, becoming more distracting than evocative. At some points it’s difficult to understand what the Weird Sisters are saying. Birnam Wood appears on video and looks like an English hardwood forest. Lady Macbeth and her ladies-in-waiting listen to a reggae song on beach towels as Duncan approaches Dunsinane. Banquo’s ghost doesn’t appear in the famous feast scene except as a projection; the physical bloodied body of an actor is crucial if that scene’s shocking creepiness is to come alive.

Turning the witch Hecate (Victor Love) into a powerful presence who dominates and terrorizes the other witches and hovers over the human action is one of the production’s most interesting choices. In other productions, the end, as Macbeth is vanquished and his death is announced and celebrated, can often read as a bit of sunlight finally pouring into a dark and fetid room. But here, more suggestively, an invisible Hecate stands upstage and snickers, as if to say he understands that this is all more of the same cycle: power and the self-destructive human struggle to attain and keep it.

The show is well worth checking out for the physicality and presence of Ghant’s Macbeth. In the end, however, the jumbled production never really develops the heart-pounding, locomotive unity and inevitability — the electrifying interplay between recognizable human temptation and outrageous supernatural creepiness — that can make a great production of “Macbeth” really soar.