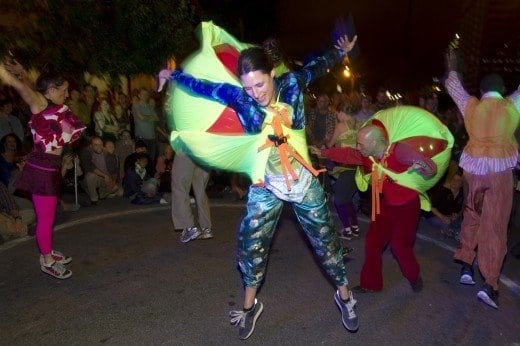 Dancers perform at Flux Night 2012. The event itself has been in flux for several years. (Photo by Adam Davila)

Review: Flux Night 2012 finds risks and rewards in a perch on the cutting edge

Flux Night is, you might say, a party with a purpose. It aims to be a popular community event that is also a platform for cutting-edge public art.

To judge by the crowds roaming the streets of Atlanta’s Castleberry Hill District on Saturday night — diverse and in larger numbers than ever — and their festive mood, Flux Night 2012 was a success as a block party. It also fulfilled its mission to expose visitors to art they might never otherwise know about. For fans of contemporary art, it was more of a mixed bag. But only the most jaded of visitors could have come away without having enjoyed some memorable experiences.

“Turn the Page.” In this imaginative dance and performance piece, Nicole Livieratos and her group staged six episodes satirizing our propensity to engage in unproductive repetitive behavior. Life in the rat race, or more aptly, the hamster wheel.

Everything about “Page” was creative, from the jesterish costumes to the mobile lighting and music (on a platform wheeled from station to station). The episodes ranged from sophisticated slapstick, with performers disporting themselves like bumper cars, to complicated choreography, as in the piece in which they literally drank themselves under the table. Bravo!

“The Sacred Life.” Ben Rollins’ installation centered on the live performance of Sacred Harp music. The singers took their traditional positions, facing one another in a square formation, surrounded on three sides by Rollins’ wall-size projections of vintage imagery. The visuals had no direct connection to the music, which I found confusing, but they served well as a backdrop and space-definer.

The music was the thing. For four straight hours, the shape-note singers filled the space, tucked into the back of a building, with sweet four-part harmony. Those who took the initiative to sit on the floor in the “hollow square” (in the middle of the singers’ formation) were treated to an exhilarating stereophonic immersion in spiritual sounds. (In the future, Rollins might want to make this option clearer to the audience.) One’s personal religion was irrelevant: this was aural transcendence.

“Act of Devotion.” Set to music played and composed by Daniel Clay, gloATL delivered a mesmerizing performance. Stationary for a change, the troupe performed in an atmospheric ruin on an elevated stage, which improved visibility for the large gathering.

Costumed in pasties, pants and caps — intended, it seemed, to neutralize gender, as did the choreography — the dancers moved with sinuous athleticism. The vocabulary was a refreshing departure from the deliberately awkward movements that have threatened gloATL’s last few performances with sameness, despite their different locations.

Flux Projects, the sponsor of Flux Night, did a nice job of selecting projects that varied in pace, tone and range of visitor participation. One could dance in a space framed by the eye-popping “digital graffiti” of Jacob Abramson and Suzette Guy or sit quietly in front of Dorothy O’Connor’s tableau vivant, watching actors make paper birds in slow, studied movements — a scene that was surreal, beautiful and a bit creepy all at once.

On the debit side, a number of favorite Flux Projects artists didn’t quite deliver this time. Amber Boardman’s animation did not match the inventiveness of her earlier works. Stefani Byrd + Wes Eastin’s talking road sign engaged viewers, but it didn’t communicate the substance of the piece, meant to be a commentary on online bullying. The perennially popular parade, a jazz funeral this time, seemed smaller and inert, perhaps undone by the lugubrious pace of the music.

And there were some whiffs. “Sound Cloud Forest,” an interactive sound and light piece by Los Angeles collective Aphidoidea, barely worked. David Yu’s “Small Meteorites,” a video installation in which spectators were privy to in-car conversations, was an underexploited conceit. Artists trying new things are inevitably going to miss the mark some of the time, but the risk can be worth the reward. For instance, Rollins, an MFA candidate in photography at the Savannah College of Art and Design, had never even done an installation before “Sacred Life.”

The character of this year’s projects suggests that Flux Night has found its sweet spot in boundary-blurring, media-merging experiential work. Some people missed the texture of pop-up projects and stationary artworks, but I think reinforcing an identity that sets Flux apart from the rest of Atlanta’s arts festivals is a good thing. It’s also a challenge: keeping up with cutting edge is, by definition, a never-ending process. The organization deserves kudos for what it has accomplished and for its determination to grow and improve. Flux Night is, and hopefully always will be, a work in progress.

(Disclosure: Flux Projects’ president, Louis Corrigan, is the chairman of ArtsATL’s board and a major contributor.)