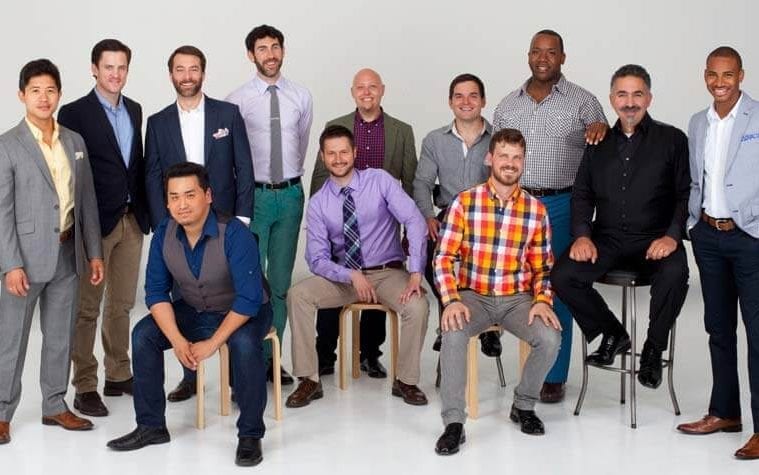 Within his notorious Canterbury Tales, Geoffrey Chaucer gave us “The Nun’s Priest’s Tale” in which the rooster Chanticleer learns the hard way that one should never trust a flatterer. On Sunday afternoon, Spivey Hall opened its 2017–18 season with a performance by the men’s classical vocal ensemble that borrowed its name from Chaucer’s story.

Chanticleer has become known for its stunning sound and staggering breadth of repertoire since its founding by Louis Botto in 1978. Now, after almost 40 years, a discography of more than 40 recordings and three Grammy Awards, Chanticleer is likely no stranger to flattery — yet it’s well-deserved to say the least.

Music director and Atlanta native William Fred Scott programmed repertoire united by the theme “The Heart of a Soldier” and began with a 16th century sacred motet by William Byrd, but the music spanned centuries to include modern repertoire as well. We heard a recent commission of the John F. Kennedy Center for the Performing Arts by Mason Bates called “Drum Taps.” The narrative text was based on a duo of Walt Whitman poems and described lawyers, mechanics and salesmen leaving for battle and finally of one family on an idyllic Ohio farm in autumn receiving news of their son’s death.

The through-composed work consisted of a vocal ostinato that mimicked the sound of snare drums, tone painting and a striking, lyric solo for countertenor above the sound of buzzing bees. Afterward, Chanticleer presented the chorus “Our Beautiful Country” from Jennifer Higdon’s opera Cold Mountain, which premiered in Santa Fe in 2015.

But a great deal of the repertoire was a musicologist’s wonderland, a tour which took us to the Battle of Marignan in 1515 within Clément Janequin’s “La Guerre” — a work riddled with onomatopoetic sound effects suggesting the sounds of battle — or to a Russian landscape in 1812 inhabited by Napoleon and his 600,000 troops in Vladamir Mantulin’s arrangement of the “Battle of Borodino.”

Here we were able to hear several lovely solo voices within Chanticleer highlighted between refrains. Chanticleer even took us back to a delightful troubadour song called “L’homme armé,” which was the basis for 50 or so Roman Catholic Mass settings during the Renaissance. It’s a good reminder as some contemporary academics and liturgists attempt to purge secular music influences from the Mass.

The wonder of Chanticleer is its beauty and clarity of sound as 12 distinctive voices mingle so perfectly; it’s difficult to detect where each voice originates as the singers breathe silently in unison and move in and out of specific configurations on stage. Chanticleer temporarily lightened the mood in the second half with Murray Grand’s “Comment allez-vous” arranged by Evan Price and an Andrews Sisters’ song, “Boogie Woogie Bugle Boy.”

But the afternoon was ended on a serious and inspiring note: a version of Pete Seeger’s “Where Have All The Flowers Gone?” arranged by countertenor Alan Ward, which revealed unsettling dissonances alongside a glorious obbligato countertenor line. And finally, they closed with Charles Hubert Hastings Parry’s “My Soul, There Is A Country.” The four-part harmony was a benediction and a reassurance that there is a life beyond this one for our fallen soldiers.