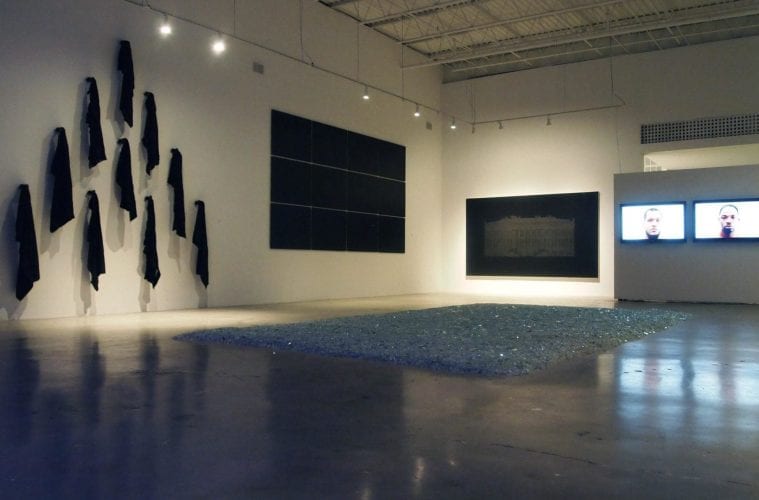 Paul Stephen Benjamin, a recipient of The Museum of Contemporary Art of Georgia Working Artist Project, makes one thing clear with his solo show, Pure Black: the time for subtlety has passed.

While there aren’t that many works in Pure Black, the large size and scope of the pieces within the limited back room of MOCA GA make the exhibition feel restricted, even overwhelming. In some ways, the crowded space amplifies some of the complex themes behind Pure Black by forcing the audience to confront the works all at once. Every piece in the exhibition demands, rather than asks, the viewer to look at it with eyes wide open.

Two works, in particular, draw the eye immediately — Ceiling and !4th Amendment. Made of thousands of shards of tempered glass, Ceiling spans across nearly two dozen square feet of floor. By “shattering” a metaphorical (and literal) glass ceiling of an industry historically dominated by white men not necessarily due to talent but due to deeply embedded systems of exclusion, Benjamin’s Ceiling lays out his accomplishments with pride. !4th Amendment comprises seven bifurcated lines of black lights, looms above in the shape of a doubled papal cross and causes the glass shards on the floor to shimmer with a magnetic purple glow. !4th Amendment is a somewhat subtler work. Written in four sections, the 14th Amendment was passed in 1868 to protect the rights of former slaves in the uncertain aftermath of the American Civil War. It seems that Benjamin is probably referring to section one of the Amendment:

Benjamin knows as well as anyone that this particular Amendment to the constitution has been (and continues to be) bulldozed over completely. !4th Amendment seeks to highlight the unspoken fallacy of that Constitutional promise through its use of massive black lights. Despite the name, black lights only highlight what is white. Comparatively, while the 14th Amendment should, in theory, protect everyone, the reality is that it often only exists in favor of white people.

Mirroring the pyramid-like shape of !4th Amendment, God Bless the Martyrs comprises 10 black ceramic hands holding pieces of black cotton with the faint design of the American flag. The drapery hangs in nice contrast to the hard lines of the purple black lights, and the lighting on MOCA GA’s wall makes each piece have a ghostly double shadow that further reinforces the eerie feeling that the hands reach through the wall from somewhere beyond the grave.

About half of the works in Pure Black are paintings on canvas, and they are very, very dark, as the exhibition title would imply. Whether painted with Behr Totally Black, Golden Black Gesso or Valspar Very Black, the works seem to consume all shimmering light around them to create a deep atmospheric tone. From certain angles, some of the paintings appear like blank black canvases. Look a little closer or walk back and forth, and the faint images of faces or words may appear. While Paint the White House Black uses black and golden black paints to present a fairly clear picture, the crowded trio Pure, Very and New are created with only one kind of paint, the words visible only through Benjamin’s use of paint strokes. In some ways, the extreme lack of light hues is dramatized by the black light coming from !4th Amendment.

Aside from multimedia installations and painting, Benjamin also uses Pure Black as a chance to show off his video art skills with the compelling piece Flow. Comprising two screens on a three-minute loop, Flow bears witness to Pure Black, and to us. The faces of two men, unnamed with unknown ethnicity, stare forward into the exhibition. They blink, they breathe and they stare. There is no sound. After three minutes, the videos loop. Unlike the rest of the works in the exhibition, Flow is somewhat ambiguous and up to interpretation. It could be that Benjamin wants us to make assumptions about these two men, founded on nothing more than their appearances, and then confront those assumptions. Do we think these men are convicts? Why do we think that? Do we see these men as dangerous or as friends? Who they are doesn’t matter. What matters is how we see them, and what that says about our biased notions of humanity.

With Pure Black, Benjamin demonstrates his increasing momentum in the art world. As of the opening at MOCA GA, he’s already earned his MFA from Georgia State University, exhibited at the High Museum of Art, Gallery 72 and Poem 88. His list of awards keeps growing, and includes the NBAF Visual Artist Award, MOCA GA WAP, Artadia Art Award and Winnie B. Chandler Fellowship. He doesn’t care about subtly, and he doesn’t care to explain his work to you, either. And he doesn’t need to. The skill, scope and intensity of the works speak for themselves.

Pure Black is on view at MOCA GA until November 18, 2017. You can read more about visiting the museum at their website.