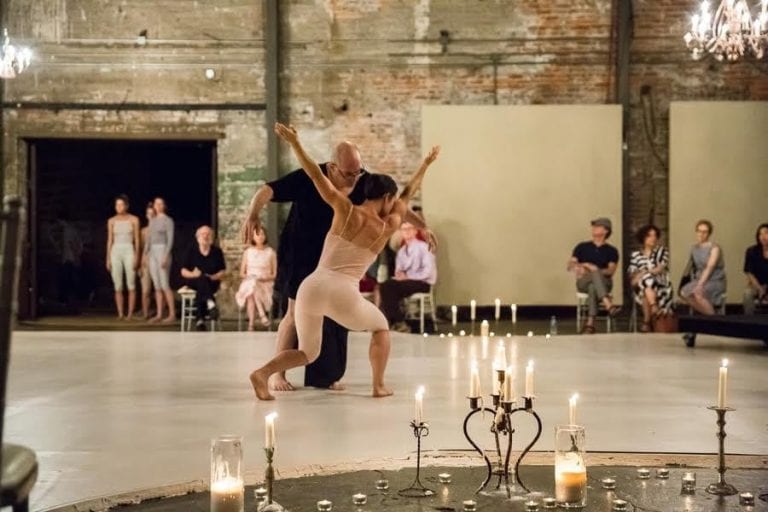 For cloth{field}, Spano left the conductor's podium and danced with glo, then played the score live on two pianos. (Photos by Thom Baker)

Friendship and risk were radiant inspirations for cloth{field} – scenes from the still world and hereafter, the third creative collaboration between conceptual artist and choreographer Lauri Stallings and Atlanta Symphony Orchestra music director Robert Spano. The blend of Spano’s music and Stallings’ choreography resulted in a fresh, contemporary work with modern and classical underpinnings that refined Stallings’ already distinct voice, and dared Spano to step off the conductor’s podium and join, more fully than ever, in the dance.

cloth{field} made its official debut at the Goat Farm Arts Center last week, running five nights from September 7-11. ArtsATL dance critic Cynthia Bond Perry and music critic Mark Gresham were there and share these thoughts about the collaboration.

Mark Gresham: Cynthia, you and I have just experienced the opening night of cloth{field} — glo’s latest production at the Goat Farm’s Goodson Yard Factory Space — featuring concept and choreography by Lauri Stallings and music composed by Robert Spano, who also performed as solo pianist while doubling as one of the moving artists along with the six company artists from glo.

The event was billed as a world premiere, but really it was built upon the Stallings/Spano collaboration of two years ago entitled cloth, which you and I co-previewed for ArtsATL. The work has grown from a half-program length to one that spans a full evening’s program, clocking in at around 70 minutes duration without intermission. As breathtaking as that 2014 cloth was, the results of its creative evolution since then has been eye- and ear-opening. What are your observations and responses to glo’s new cloth{field}?

Cynthia Bond Perry: cloth{field} seemed to spring from the best of both artists — Spano, who lives and breathes the classical and modernist canons; and Stallings, a classically-trained artist who bases much of her work on contemporary relational aesthetics. Somehow, as Stallings’ choreography and Spano’s music combined, the different approaches found a way to move together in harmony. Stallings and Spano’s artistic friendship clearly drove their risk and exploration, while formal principles seemed the work’s scaffold.

Gresham: Spano’s music does seem to solidly fit within that modernist aesthetic. While his materials have at their core a twelve-tone row — which in one section he lays out straightforwardly in its four strict forms: original, retrograde, inversion and retrograde-inversion — he makes use of serial techniques loosely, without ever limiting himself to a pan-tonal harmonic language. Much of it involves modern tonal language, in a non-strict sense, to good effect. Even with overall modernist sentiment, at the beginning of “air,” Spano conjures up a delightful impression of French Baroque keyboard music.

Perry: Yes, just as Balanchine and Stravinsky’s mid-20th century collaborations merged modernist ideas with classical forms, cloth{field} stretched its creators’ mediums once again. It was an original and distinct expression grounded in tradition, with nods to its first incarnation, cloth. How would you say cloth{field} was similar to, or different from, the 2014 version?

Gresham: There are about 17 more minutes of music in this version than in 2014, rounding out the original idea of being inspired by the four classical elements, played in the general overall order of “earth,” “air,” “water,” “fire” with some more “earth” music at the end for good measure. The “earth” and “water” music were in the original production. The “fire” music, which thunderously enters late in cloth{field}, was composed next. The last to be composed was “air,” written in January while Spano was away from Atlanta, in an undisclosed location, just for that purpose. I felt that Spano’s additions to the music gave the current cloth{field} score a much greater emotional range and depth. Final touches on the order of sections and the choreography were very, very recent, so no wonder that section especially felt timely and fresh.

Perry: Fresh, it was. The full-length work was more thoroughly fleshed out than before, with a sense of journey that felt at times dark, weighted and tense; at others, bursting, playful and lilting. Familiar images reappeared, such as Spano and dancer Virginia Coleman’s long, sustained gaze as they descended to the floor. As before, Spano played “water” on the baby grand piano on a circling platform, this time to a heightened effect. glo dancers dashed across the floor and circled the space, stirring up such a force, that when a few of them curved in and propelled the platform clockwise, it seemed as if platform, piano and Spano were caught up in a whirlwind. As the maestro played on, his rotating dais seemed to rise into the earth’s atmosphere. Music seemed to levitate the whirling action, while music-maker appeared swept up in motion’s embrace. The embrace seemed a defining motif – a symbol, perhaps, of the two artists’ friendship.

Gresham: Spano played a concert version of the complete cloth{field} music at the Aspen Music Festival (of which he is also music director) under the title “Sonata: The Elements.” But for this cloth{field} performance, collaboration came to the fore with the music’s deployment, as some of its internal organization was altered to suit the context of movement and dance — something a lot of composers are not willing to do.

In addition to the Baldwin baby grand piano on the rolling platform, there was a much larger Steinway concert grand in a stationary position on the other end of the performance space. Spano’s command of each instrument brought forth vividly the range of expression and styles in his composition. I was surprised that the final music was played, prerecorded, over a PA system, but it gave Stallings the opportunity to have Spano step away from the Steinway grand and move with the dancers as his music played, just as silence allowed that at the beginning of the performance and in several other segments, to powerful effect.

Perry: Right away, in the opening silence, Spano made a strong entrance as movement artist — an extraordinary occurrence in the worlds of concert dance and music. Lit by candles and chandeliers, he emerged from the warehouse’s center door, dressed in black and surrounded by glo performers clad in pale, gray-tinted pastels. Spano faced Mary Jane Pennington, and raised his arms with a spark-like gesture, deliberate enough to start a symphony. Pennington sank to the floor and lay stiffly like crumpled paper. With decisive force and speed, Spano dropped his arms, then gently pressed his palms toward the dancer and invisibly rolled her across the stage.

Spano moved confidently around the space, seemingly an engine of creation. There seemed little or no division between Spano’s piano playing and his movement among the dancers as they lunged into interlocking clusters, sharing weight, twisting their torsos and thrusting limbs outward to suggest starbursts suspended in crystalline forms.

Gresham: The concluding sections of the work, beginning with the “fire” music, played on the larger, stationary Steinway concert grand, followed by the final portion of recorded “earth” music, was especially powerful through the fade-to-black of the panoply of chandeliers hung above, then the subsequent slow re-illumination of the performance space.

On a larger scope, overall the production values seemed a lot leaner this time around. Simpler costuming, a more minimal setup than the extravagance of two years ago, allowing a different kind of focus on the work’s elements of music. Did you get a similar impression?

Perry: Leaner, yes. By removing the large fabric sculpture, the artists opened the field to explore a more pure interplay of music and choreography. Stallings, recently focused on community-driven work, had a chance to work simply as a choreographer, perhaps on a higher artistic plane. It also allowed Spano to enfold himself into the dance. He took a real risk in doing that, to a powerful effect. I’ve seen plenty of piano ballets, but Spano’s performance gave a much deeper view on relationships between composer and choreographer, and between music, dancers and dance. cloth{field} was an inspired collaboration built on courage, masterful artistry and above all, trust.