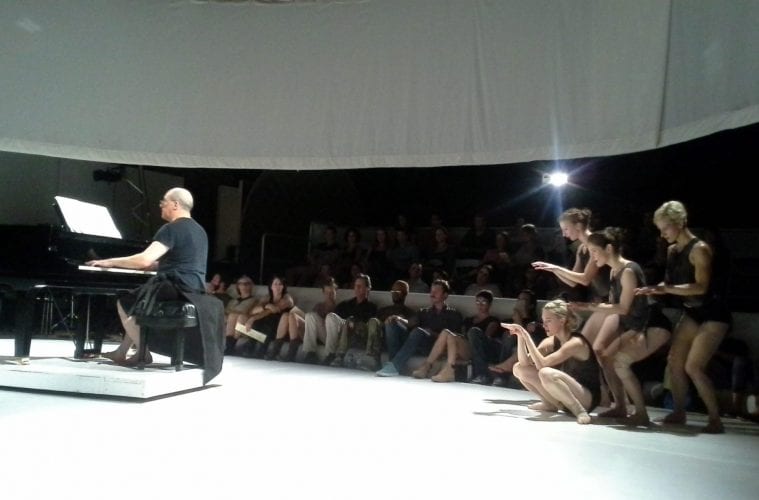 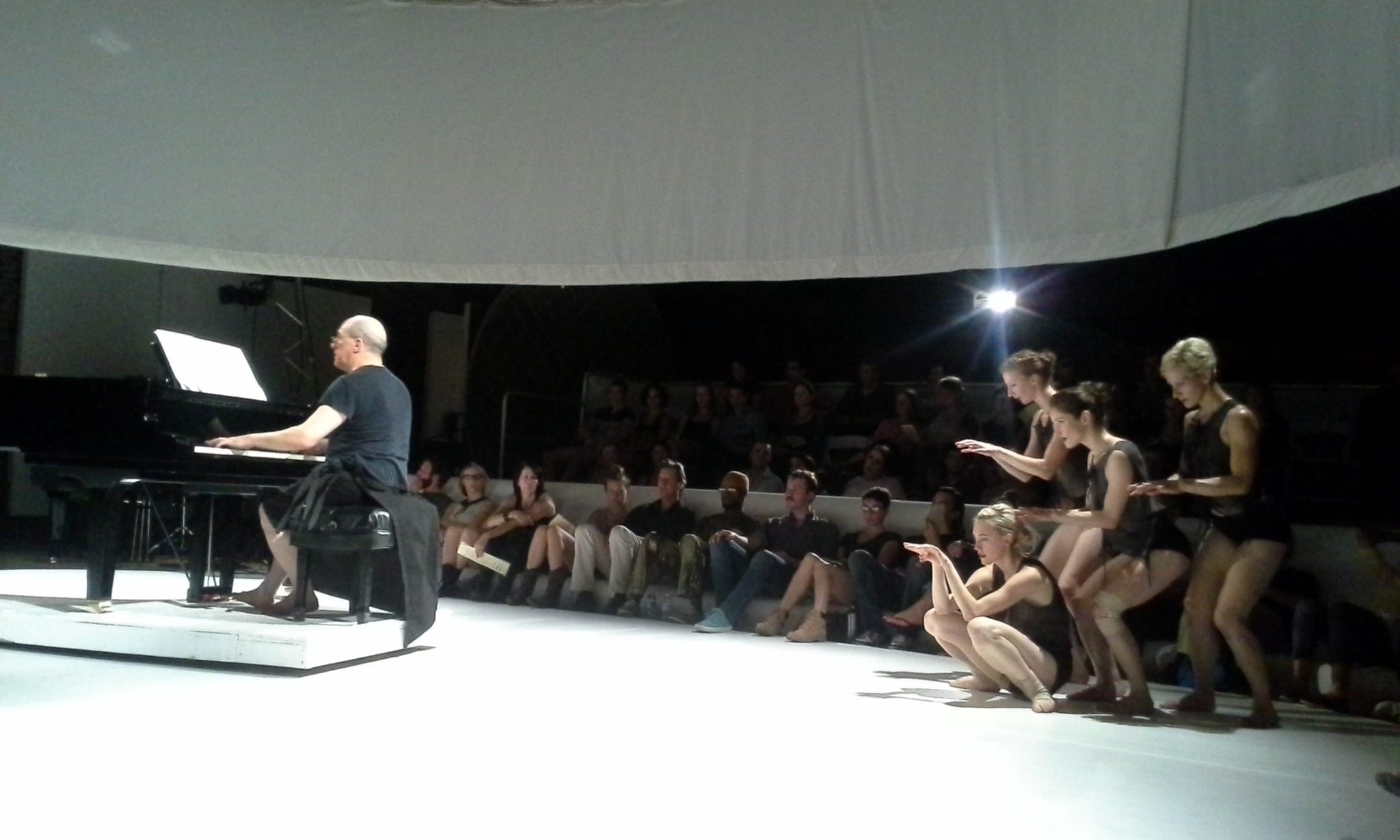 None of the Lauri Stallings’ collaborative works I have seen — and I confess I’ve seen only a handful — has exuded as much joy as cloth did Thursday night at the Goat Farm Arts Center’s Goodson Yard. Cloth was the first of two world premieres on the program; the second was The Tower, set to Stravinsky’s “The Rite of Spring” in a transcription for two pianos and percussion. The much-anticipated event, which ran through Sunday, drew a big crowd on Thursday; people were turned away at the door.

The evening was a dense and multilayered collaboration between Stallings and a topnotch cadre of musicians, filmmakers, set and lighting designers, a sculptor, nondancers and dancers from Stallings’ company (glo) and Kennesaw State University. In the center of Goodson Yard’s dark, industrial space was a rectangular white floor surrounded on four sides by white vinyl benches for audience members brave enough to sit that close to the action. A voluminous white balloon of cloth hung from the rafters, and a white cyclorama, high above eye level, served as the film screen in The Tower. Two shiny, black grand pianos were tucked in one corner.

Before cloth officially began — or had it begun? — one dancer quietly entered and danced in place next to one of the pianos. You easily could have missed her. At the same time, an audience member holding a drink walked across the other side of the space, looking for a seat. This is where Stallings excels. She seamlessly creates environments where audiences consciously or unconsciously participate, blurring the distinction between what is, and isn’t, art.

Cloth was set to an organic, free-flowing piano score composed and played by Robert Spano: how often have you seen the music director of the Atlanta Symphony Orchestra in bare feet and a full-length black skirt? It began and ended with two single notes — the first and last drops of rain perhaps — and swooped from light, bright showers to passages of full-bodied thunder. 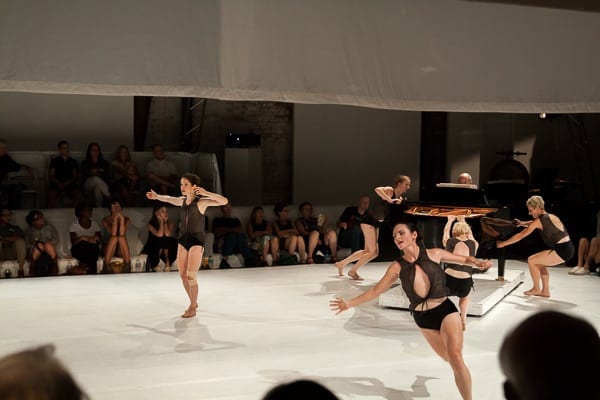 As Spano played, dancers rolled his piano out onto the dance floor. (Photo by Thom Baker)

The choreography was equally organic, moving from brief tableaux of dancers that rivaled Balanchine for their architectural beauty, to wild rushes of movement that brought to mind river rapids, waving branches, emergence, growth.

Stallings has expanded her movement vocabulary in this work to great effect. There were dynamic, horizontal leg extensions, a myriad of uplifted gestures and a joyful expansiveness and dynamic range that I have rarely witnessed in her work — at least in the pieces I have seen. It was breathtaking.

Incorporated into these swirls of movement was the familiar Stallings’ stride — dancers moved with shoulders sloped, arms held still at their sides, chins slightly forward — and the Stallings’ stare, in which dancers lock eyes with one another or an audience member. (I experienced the stare with Kristina Brown in The Tower. Her face was just inches from mine and, I confess, I blinked first.)

So many images resonated in cloth: The five dancers galloping and turning. Spano in the middle of a line of dancers as they walked slowly, shoulder to shoulder, across the space. Spano and the long-limbed Virginia Coleman, eyes locked, embracing as they sank to the floor. The freight train that rumbled by at the end just as the music faded — could it have been more timely, more unexpectedly perfect?

The Tower was more difficult to embrace initially because so much was happening at once. Pianists Spano and Pedja Muzijevic and ASO percussionists Tom Sherwood and Charles Settle surged through the Stravinsky score; the 19 white-clad dancers and nondancers launched into phrases that were percussive, jagged and feral; Micah and Whitney Stansell’s images of fields and animals filled the screen; and the dancers alternately wore and didn’t wear Audrey Morrison’s burlap animal heads. 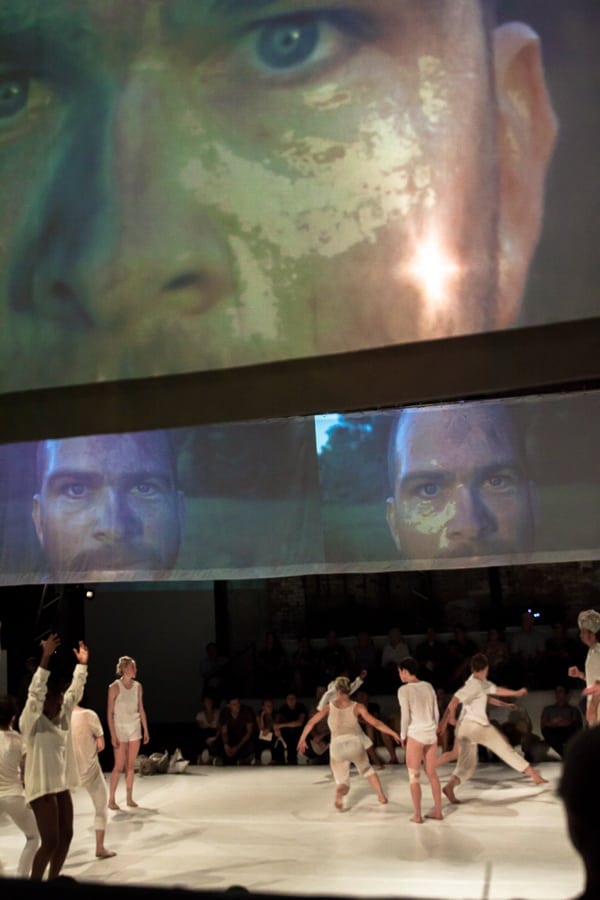 Overall the piece ricocheted between ritual and apparent randomness. There was an echo of Vaslav Nijinsky’s 1913, riot-inducing choreography in one flat-footed walking step, and a sense of the sacrificial when various dancers — the chosen ones? — were lifted high overhead.

Countless dance makers since Nijinsky have choreographed “The Rite of Spring,” among them Maurice Béjart and the iconic Pina Bausch, and it’s hard not to compare one with another. Stallings’ version seemed mostly, but not always, at home with the music. It was fragmented and episodic at times. It was also difficult to know where to focus. In sensory overload, I found I was either listening to the music, watching the movement or checking out the film images.

The work coalesced for me about two-thirds of the way through and swept toward a brilliant finish with a slow, snaking line of dancers breaking into circles. The Tower is an ambitious work and deserves multiple viewings; I had a deeper and more rewarding experience of it when I saw it again Friday night. All the performers were terrific, particularly Coleman, Brown, Jennifer Cara Clark and the muscular Mary Jane Pennington. Joe Dreher too: one of the untrained community participants, he is a big man with a big presence.

It would take multiple reviews to capture the breadth and depth of this collaborative evening, but one thing is for sure: Stallings is not afraid to take risks and pour her entire, idiosyncratic, philosophical self into these artistic experiments. Her unique vision has changed the way Atlantans experience not just dance but all the arts, and we are immensely richer for it.