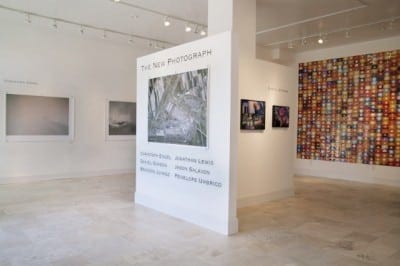 Dispensing with a strictly lens-based practice, the artists in Hagedorn Foundation Gallery’s “The New Photograph” promiscuously jumble photography with other media. In so doing, they create beautiful, sometimes disquieting work that questions some long-held beliefs about what photographs are and do. The exhibition is on view through October 22.

Cleveland-based Brandon Juhasz pulls images from the Internet to construct what he calls “three-dimensional paper sculpture.” He then photographs these collage-sculptures to present images that he hopes will, as he says, “question the legitimacy and meaning” of the glut of images around us. The offbeat titles and crisp, hyper-real juxtapositions in such works as “Prop” — an image of a stack of pies upholding a window — look a bit like Rene Magritte’s tidy but improbable arrangements.

Brooklyn artist Daniel Gordon adopts a similar starting point but moves in a very different direction. He first came to attention with his series of “Flying Pictures,” self-portraits of the long-john-clad artist soaring over landscapes which, like Yves Klein’s famous “Leap Into the Void,” take a humorous swing at photography’s much-vaunted veridical status. For the work presented here, Gordon has photographed 3-D sculptures he constructs from printouts taken from Google searches, creating images whose impossible mishmash foregrounds their own speciousness. (Gordon’s “Pink Face” is at left.) Like Juhasz, Gordon pushes photography in the direction of other media, such as painting, collage and sculpture, suspending our notions of photography’s existential relation to the real.

German photographer Christoph Engel responds to what he calls “the flood of pictures polluting the world” by creating what he calls “digital collages” from images drawn from Web portals such as Google Earth and Google Weather. For the series “Vue des Alpes,” Engel takes images of the snowy mountains, changes them to black and white and, it would seem, re-photographs them from his computer screen.

Blown up to massive size, the resulting ghostly, grainy images, discernible only from a distance, push photography to representational collapse. “Untitled (Ships 091201),” from Engel’s series “Superficies,” plays similarly with the gallery space. Close up, the photograph (below) reveals the startling unreality of dozens of ships in near-collision; from afar, it resembles a mid-1960s Larry Poons painting.

Jonathan Lewis shares with Engel an interest in pushing photography in the direction of color field painting. The Los Angeles artist’s “Designer” photographs of shop windows, taken with a cheap hand-held camera and then blown up to a just barely decipherable resolution, at once evoke 20th-century abstract painting and the photographic tradition of shop windows as subject matter that goes back to Eugene Atget and Brassaï.

Jason Salavon’s “Portraits” most explicitly play off painting. For these pieces, the Chicago-based artist works from his self-created software to determine color averages of Dutch master paintings by Hals, Van Dyck, Velasquez and Rembrandt, reproducing these iconic self-portraits as sfumato-infused abstractions. The pictures are at once mysteriously illegible and recognizable, playing off ideas of art history and cultural capital.

The work of New York artist Penelope Umbrico engages similar ideas about the relations between the illegible and the recognizable from a much different perspective. Her “Suns From Flikr” project (example above) began with her attempt to find “the most photographed” subject. Taking images of the sun from anonymous photos on the Flikr website, Umbrico creates picture-collages with varying degrees of opacity that, as the title “87 Suns From Flikr — 29 Visible” suggests, play the visible and invisible off of each other.

With the exception of Lewis, these artists find their source material on the Web. Lewis uses low-tech equipment to photograph sometimes upscale, sometimes low-end commercial subject matter. The “curatorial” process of these artists raises questions about originality, authorship and just what kind of photograph belongs in an art gallery.

An artist talk with Jason Salavon and Penelope Umbrico will take place at 6:30 p.m. October 21.