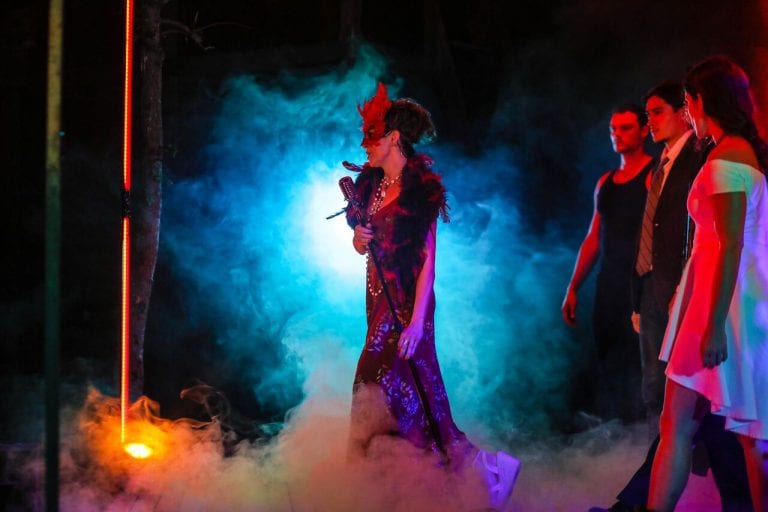 Review: Serenbe puts its unique and mostly successful stamp on Chekhov’s “The Seagull”

In an early scene of Anton Chekhov’s 1896 classic The Seagull, a small group of family members and friends gather outdoors by a lake to watch a baffling new play. It’s a short scene (the little play-within-a-play is brought to an abrupt end by one of the characters), but it’s given some intriguing centrality and hall-of-mirrors resonance in an outdoor lakeside production of a new adaptation by Elizabeth Dinkova, who also directs. The Seagull runs at Serenbe Playhouse through September 30.

The basic plot and dialogue are still mostly Chekhov’s, but the story is somewhat condensed. Minor references are changed so things have a more contemporary American feel: vodka is now pot, Moscow is now New York, a character is changed from male to female so a central romantic relationship becomes a lesbian one and so on.

The most striking innovation in this adaptation are some original cabaret-style songs, about eight or so, interspersed throughout the performance, essentially short interior monologues sung by the actors, who often don elaborate masks or costumes to perform the numbers. While the songs are interesting, and the wild staging and stunning lighting are a trip, it’s surprising how little they add to the story or to an understanding of the characters in the end.

Similarly, although the choice to cast a female Konstantin (Constance) ends up making perfect narrative sense, and Washington performs well in the role, one expects this shift to reframe or alter the perception of who Constance, or all of these people, might be. Strangely, it doesn’t. For all the production’s modernity, the story still plays out and feels remarkably the same (which, I suppose, one might identify as criticism or praise). Either way, the most powerful moments still unquestionably belong to Chekhov scenes played closest to the book.

There’s plenty of that, and the cast is fine across the board. Krausen’s conception of Arkadina is most interesting when things get desperate for the character. Arkadina is undeniably a theatrical woman, but I found her in early scenes to be too theatrical and manipulative in an immediately risible way: Krausen masterfully reveals the character’s heart in later scenes when the theatrics stop working, when she suddenly finds herself without a familiar card to play.

Osorio gets Trigorin right, as well, and the update does actually add a slight new spin to the unfairness of his actions; mistakes can simply recede into the past for someone like him, while others have to suffer consequences that stick. Handsome Skye Passmore seems at first miscast as the undesirable lump of a schoolteacher Simon, but he does remarkably well in those unusual circumstances, as does Brooke Owens as his gothy, self-loathing, spikily abusive Masha, whom he chases after relentlessly. McCarren admirably delivers a fine version of Nina’s final speech — presumably one of the most difficult and self-baring in the whole of theater — soaking wet and in a bathing suit.

One of the many interesting things about Chekhov is that lines or interactions that seem utterly forgettable in one production can become the heartbreaking center of another. Although Dinkova gives the sexual relationships a contemporary frankness, prominence and fleshiness, the (nonsexual) relationship between Arkadina and her childlike, forbearing brother Peter (Allan Edwards) pops to life in touching, tender detail in Krausen and Edwards’ hands; I’ve seen the play before but had nearly forgotten Arkadina has a brother.

This production of The Seagull sits beautifully by a real lakeside, but it sits less comfortably in the Serenbe Playhouse season. Serenbe typically produces spectacular site-specific outdoor productions of big, appealing musicals. Theatergoers won’t soon forget the company’s 2016 production of Miss Saigon, which featured the landing of a real Huey helicopter, or this summer’s production of Titanic, wherein performers sang about the great ship going down as they dove into the water to reenact it.

Efforts to give the summer season some variety and heft with a sprinkling of weightier classics is admirable and correct, I think, but in practice, this hasn’t always gone smoothly. I wasn’t fond of an early Midsummer Night’s Dream (When does a dream become a nightmare? Midway through a meh production during a heatwave, with evening temperatures barely dipping below 100) and last season’s Macbeth (in which a noisily gushing waterfall became the unintended scene-stealing star of a lackluster evening).

I was much happier at this Seagull than either of those earlier efforts, and I admired the sense of playful, avant-garde experimentation with a classic — new ground for the company — but I speculate that some Serenbe patrons may not feel the same. The online marketing of the show runs along the lines of “This is Chekhov . . . only not boring!” That’s not just icky, but it could actually be seen as misleading. The mood of a Chekhov play is often one of inescapable stasis and paralyzing confusion in the face of life’s pointlessness. Patrons who arrive unfamiliar may have trouble puzzling out what’s even Chekhov here and what isn’t, or they may indeed encounter him in all his dowdy fierceness; either way, a sense of dissatisfaction with what they’ve been told seems understandable. But who knows?

During intermission, my stunned but pleased theater companion, who had never seen The Seagull before, summed up what we’d watched by saying, “This is great. Everyone wants to kill themselves.” We were both in seventh heaven, but her incisive description could also serve as a cautionary warning: The Seagull will not fly for everyone.

Spoiler alert: Things turn out badly in the end. Human shortcomings — vanity, cruelty, self-hatred, pettiness, regret, selfishness, despair, short-sightedness — are splayed out on stage in painfully, painfully recognizable ways. While I can’t describe any of this as a particularly pleasant experience, an uncomfortable sense of recognition is for me the ultimate test of whether a Chekhov performance has landed well. The occasional urge to huddle under my chair with my fingers in my ears during the second act must, in the end, be taken as a measure of the show’s success.