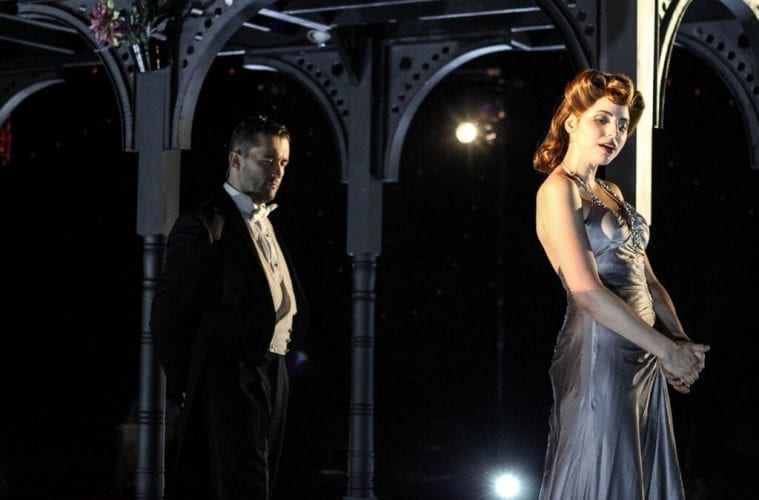 Review: Serenbe puts a rousing stamp on “Evita” for one of the best musicals of the season 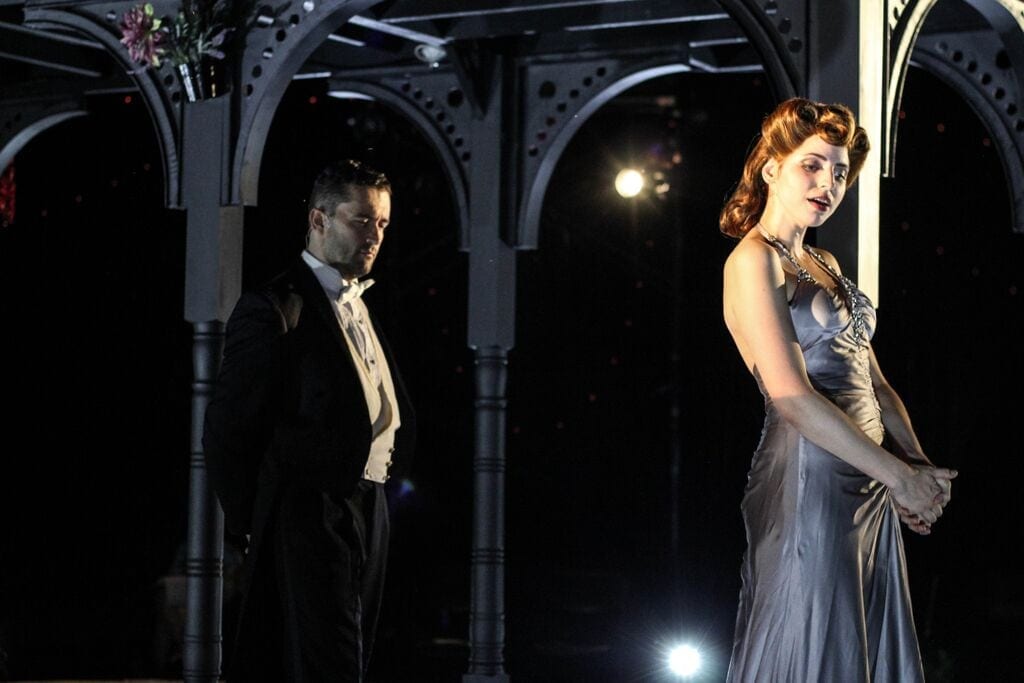 If he hasn’t already, Brian Clowdus, the artistic director of Serenbe Playhouse, should send flowers — or a thank-you card — to the producers of the latest national tour of Evita, which came through the Fox Theatre last year. Clowdus has credited that version for inspiring him to direct his own — and his take of the musical is a jolting experience, due to some inspired casting and a creative approach.

In its first outdoor staging, Evita — this summer’s season closer for Serenbe, running through August 16 — makes grand use of its natural setting. The musical, of course, is the Andrew Lloyd Webber/Tim Rice tale of Eva Peron (Randi Garza) and her journey from ambitious teenage girl to actress to eventual husband of Juan Peron (Cesar Augusto), who would go on to become Argentina’s president.

Being a political figure suited Eva just as well as her lavish wardrobes. The one obstacle she couldn’t overcome, though, was her failing health. Che Guevara (Charlie Brady) is the musical’s narrator, both fascinated and put off by Eva, often mocking her.

I’ll say this about Clowdus — he goes for it. He is not known for meek, scaled-down productions. It’s abundantly clear that he is an appreciative Evita fan — and has wanted to give this his own distinct spin. Staged in the round, it’s entertaining and smartly executed, with plenty of atmosphere. At times the ensemble players are feet away from the audience, whether they are preparing to jump into the action or sitting at tables smoking leisurely.

It’s highly theatrical, beginning with Eva’s death and a coffin barreling out a door, with a line of young girls in black joining in to mourn. 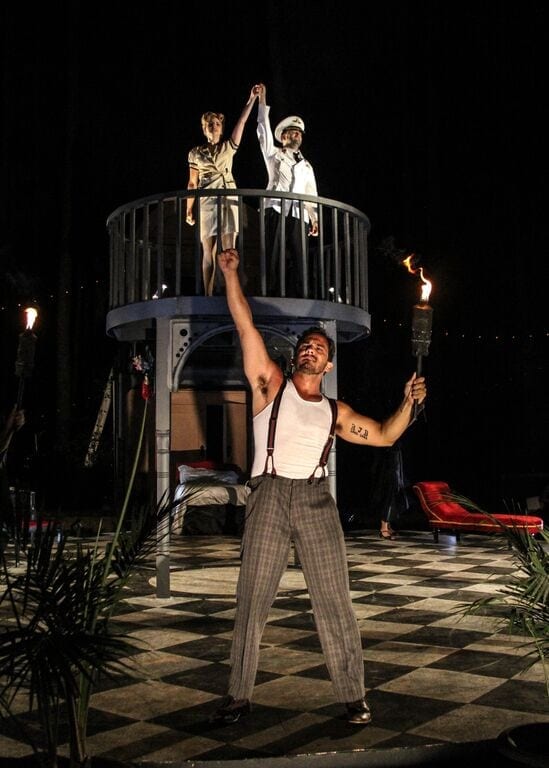 Technically, this show benefits from a set from sisters Moriah and Isabel Curley-Clay capped by an elegant balcony. Erik Teague and Abby Parker’s costumes are exemplary while Kevin Frazier uses varying degrees of light effectively. Props also should go to the ten-person orchestra, led by music director Chris Brent Davis.

With this production, Clowdus works again with cinematographer Bubba Carr on several numbers. For a show that doesn’t always have an abundance of major dance, this version does, particularly the bouncy “Buenos Aires,” where Eva moves through the streets of her new home, and a sumptuous, inventive “And the Money Kept Rolling In.” Vivid as well is “A New Argentina,” with revolutionaries literally on all sides before crowding the stage.

Evita wouldn’t be much, however, without performers able to steer it and handle the non-stop score. Clowdus’ cast is eager and sexy.

Eva has been played by the likes of Patti Lupone on Broadway and Madonna on film. It’s a challenging role, vocally and emotionally. Sans dialogue, only the character’s songs define her.

Garza, an actress who has been seen the last year in numerous musicals such as Hands on a Hardbody at Aurora Theatre and The Rocky Horror Show at Actor’s Express, brings a real sense of a young woman coming into her own, taken by the power and glamour of where she has risen. She also has a terrific voice that works throughout the entire range of the score. Her signature moment, standing atop the balcony, is her “Don’t Cry For Me, Argentina.” Among her “people” are the audience members; it’s thrillingly sung and handled.

Broadway vet Brady is just as memorable. He is talented and charismatic, straddling his feelings towards the titular character. Even his perspiration has personality.

In support, Ally Duncan, who stars as Peron’s mistress, does a lovely rendition of “Another Suitcase in Another Hall,” while Chase Peacock, seen in Atlanta Lyric Theatre’s Catch Me If You Can and Damn Yankees this spring, is a notable Augustin Malgadi, who Eva blackmails to get to come to Buenos Aires. His “On This Night of a Thousand Stars” is an Act 1 highlight.

The only slight missteps here are Augusto, who has a huge operatic voice but can’t flesh out Peron, and an Act 2 that can’t always keep pace with the brazen first.

Nonetheless, both Serenbe newbies and Evita diehards — myself included — should really like this. This is an Evita that surprises and pleases. It’s one of the best musicals of the 2014-15 theater season, and by far Clowdus’ most joyous outing since his Hair two seasons ago.