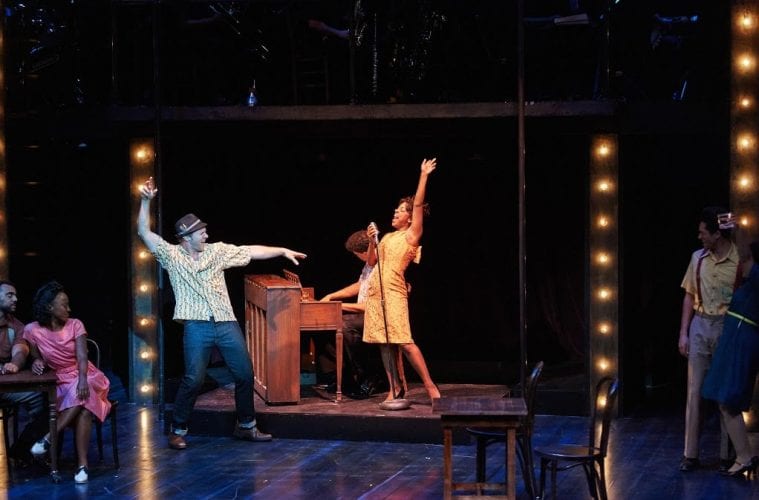 Review: Despite some hits and misses, “Memphis” finds the beat with timeliness and meaning 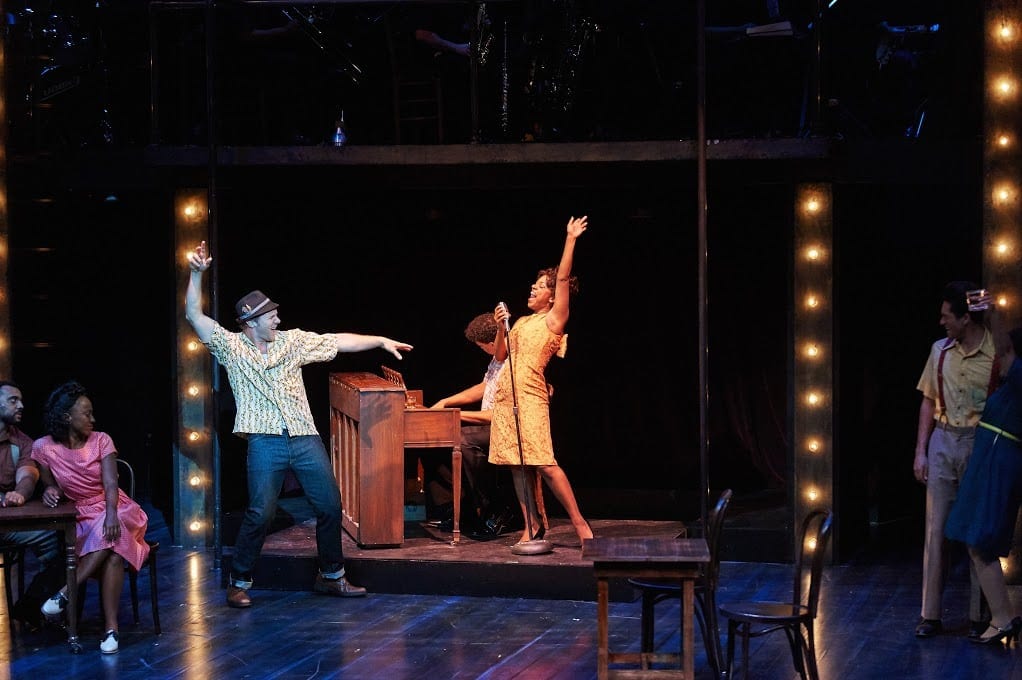 It’s 1951 and Delray’s juke joint is the hottest place to be on Beale Street, where Felicia Farrell’s voice keeps the crowd swinging to rhythm and blues music.

One Saturday night her voice draws in Huey Calhoun, a white aspiring radio DJ who loves black music (and eventually Felicia). Calhoun is based on legendary disc jockey Dewey Phillips, one of the first DJs to play “race” music on a white station and who also famously introduced Elvis Presley to the airwaves.

In segregated Memphis, however, getting that “race” music on the radio is a challenge and maintaining an interracial relationship is even harder. As years pass, and Huey and Felicia grow closer to their dreams, they find that race is not the only thing that threatens to pull them a part.

The 2010 Tony Award-winning musical Memphis is onstage at Aurora Theatre through August 30, and transfers to Theatrical Outfit September 10-20 on the Rialto Center for the Arts stage. The musical opens Aurora’s 20th anniversary season, and director Tom Key brings his signature humor to the helm of this vivacious production that is full of high kicks, backflips, double-dutch, rock and soul. The ensemble looks great and is very time period appropriate in Shilla Benning’s dazzling costumes (a silver suit was a crowd favorite).

Felicia and Huey carry much of the show and despite a few fumbles, both actors do the job. Naima Carter Russell (as Felicia) has a slow start in owning the songs in the first act, but finds her groove in the heart-wrenching song “Colored Woman,” and is a vocal powerhouse through the rest of the show. Travis Smith’s rendition of Huey is corny and charming, enhanced by his smooth singing voice. Smith physically totally inhabits every “hockadoo” bit of the role each time he shuffles and wiggles his feet across the stage to the music.

This dance-centric show is packed with large musical theatre numbers, and in the first few rows the vibrations from the dancers onstage shake the seats. Unfortunately, Waverly Lucas’ ambitious choreography overwhelms the small stage, and the actors look uncomfortable. They are one kick and flip away from taking each other’s heads off, which is a miss in a show that has the potential for so many memorable dance moments.

The music in Memphis is similar to Hairspray, especially the song “Everybody Wants to Be Black on a Saturday Night,” but it is less R&B and more rock ’n’ roll.

Ann-Carol Pence, the production’s music director and Aurora’s co-producing artistic director does this infectious score justice with an outstanding band. The chorus struggles with some of the more traditional musical theatre songs, but the pieces really come together in the traditional gospel numbers, such as “Make Me Stronger” and “Say a Prayer.”

This musical set in the 1950s has incredibly timely themes, addressing racism, violence against black people and cultural appropriation. Everyday there seems to be a different think piece about whether there are lines to be drawn regarding appropriation of black music (Iggy Azalea), black hairstyles (Katy Perry in cornrows) and #BlackLivesMatter versus #AllLivesMatter.

At one point in the show Felicia’s brother Delray says to Huey: “My soul don’t want none of your soul stealing none of my music.” Where Memphis succeeds most, however, is bridging appreciation for black music with love for black people.

Today, the constant fear in the black community of violence at the hands of white people is all too real, and Memphis aims to show the positive impact on everyone that can come with integration and love. Music is the uniting force and everyone is equal on the dance floor.

Even when it stumbles, this family-friendly musical has all of the right pieces for a fun night at the theatre.