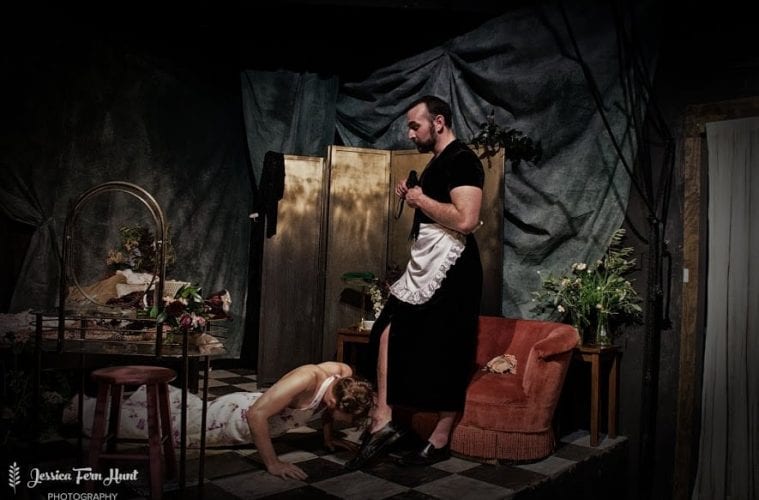 The new theater company The Seedling Project makes an impressive showing with its first official theatrical productions, a double-header of challenging plays, Deathwatch and The Maids, both by French playwright Jean Genet.

The company, which made its debut with the competitive web series Serial Killers in August, has an idealistic mission: to make theater free and accessible for all. There is no charge for admission to the shows, only a suggested donation. The performances run in rep at the Big House on Ponce through October 11.

Genet famously utilizes an all-male cast to perform as women in The Maids, and the company takes the same template and applies it to Deathwatch, a play set in a prison cell and written for three lead male performers. In the new production, the parts are performed by women. It’s an inventive and nicely symmetrical approach, though in the end, the harshly surreal, absurdist and cruel atmosphere of The Maids makes it come out as the stronger work.

In The Maids, directed by Jennifer Alice Acker, Solange (Jayme Smith) and Claire (William Webber) are housemaids who fantasize about murdering their wealthy, demanding mistress (Dan Ford). They construct role-playing scenarios (when the play opens, they are in the midst of one, and it takes us a moment to identify who is who). Their games are as elaborate as they are sadistic, but the maids typically fail to carry them over into real life, where they remain subservient.

The three performers are spot-on in the show, which still feels disturbingly bizarre and provocative, though it’s almost 70 years old. They’re funny without sliding into easy camp, silly slapstick or mean-spirited mocking of feminine mannerisms that would be easy pitfalls for performers in the play. Even in the funniest and strangest moments, there’s an undercurrent of deadly seriousness.

The scenes in which Smith and Webber pretend to be mistress and maid, enacting episodes of domination and violence, are particularly well-played. Dan Ford as Madame is appropriately fussy and self-absorbed, prepared to follow her lover to the ends of the earth, but nastily condescending and cruel to her maids. Deathwatch, directed by Rebekah Suellau, similarly examines the flow of power, domination and submission between three characters, prisoners in a cell. The leader, Green Eyes (Mary Ruth Ralston), has committed murder and is scheduled for the guillotine, and his cellmates LeFranc (Sarah Newby Halicks) and Maurice (Dani Herd), who both idolize him, squabble as a power vacuum is soon to be created by his death.

I found Genet’s romance about crime hard to connect to, especially in contemporary America where it’s become difficult to imagine violence as redemptive or as a badge of outsiderism — it’s become too random and prevalent. And conversely, some of what seemed outrageously depraved in Genet’s time now seems milder.

In The Maids, using men to play women adds another layer of theatricality to a show that already has fascinating layer upon layer of performance within performance, but in Deathwatch I became too conscious of women playing men who were themselves authorial constructions, walking and talking phalluses with too much swagger and glower, posturing and pacing.

As bizarre and blatantly theatrical as Genet’s dramas are, I think there’s an element of naturalism that should be present but is missed in both shows, a disturbing sense that, as far out and absurd as what we’re witnessing is, the events might also really play out in reality, that these resentments and power struggles are very much drawn from life. The world of early 20th-century French prisons and domestic servitude are pretty distant now, so the particular mixture of naturalism and absurdism takes some time and effort to find.

The simple sets by Elizabeth Jarrett are impressive and inventive considering what must have been the limited budget of the small new company. The elaborate French boudoir of The Maids is surprisingly convincing with its checkerboard floors and period furniture. Simple black ropes hung from the ceiling do double duty in the shows, gathered together and hung to one side they suggest the elegant parted curtains of a French household and allowed to hang straight down they suggest the bars of a cell.

The shows are performed on a small stage behind what is called “the Big House on Ponce,” one of the last remaining early 20th-century mansions on Atlanta’s once grand Ponce de Leon Avenue, in a small building in the midst of a dark, lush and quiet garden behind the old house itself.

It all seems worlds away from the noise and traffic of Ponce just outside the gates. A walk down Ponce is necessary because there’s little on-site parking available, but in its favor this has the appropriately dangerous feel for the work of Genet. You begin and end the evening wondering if you might be murdered.