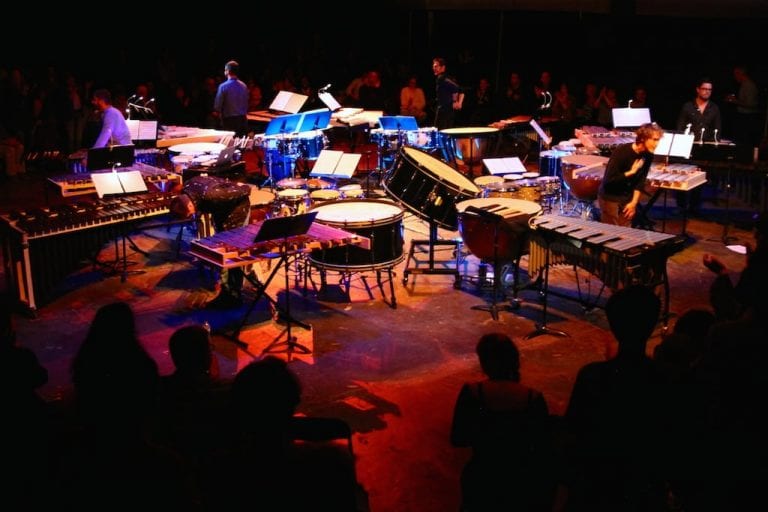 Last Saturday evening, Chamber Cartel presented the Southeastern concert debut of Pléïades by Iannis Xenakis. The performance at Goodson Yard on the grounds of the Goat Farm Arts Center was a knockout in every way imaginable.

Written during 1978-79 on commission from the city of Strasbourg, France, Pléïades was first performed by Les Percussions de Strasbourg in May 1979 when Xenakis was 56 years old. The title is variously associated with the star cluster in the Taurus constellation, which is visible in the Northern Hemisphere only in winter, and the daughters of Atlas, a Titan in Greek mythology whose ill-fated decision to wage war against the Olympian gods resulted in his being forced to hold up the heavens (not the Earth, as some presume) until the end of time.

The four movements of Pléïades refer to the material, construction and sound of the instruments: Peaux (drums), Claviers (mallet percussion), Metaux (metal instruments) and Melanges (mixture).

Xenakis’ complex and challenging Pléïades calls for six percussionists playing conventional drums including tympani, tom-tom and congas, a xylophone and marimba, plus a sixxen, which was specially conceived by the composer for the work. A single sixxen consists of 19 metal bars (made from aluminum, bronze or steel) tuned microtonally to an unequal 21-note scale. The bars are laid out on a rigid frame like a xylophone and struck with mallets.

Xenakis was born in 1922 into a Greek family living in Romania. Following the German invasion in 1941 Xenakis fought in the Resistance, was wounded and lost sight in one eye. Forced into exile after the war (because he had fought the Germans under the Communist banner), Xenakis wound up in Paris where he was mentored by the architect Le Corbusier and studied composition with Olivier Messiaen.

The effect of World War II on Xenakis and other pioneering composers, such as Karlheinz Stockhausen and Luciano Berio, cannot be overstated. Channeling their experience into developing radically new approaches to writing, playing and listening to music, Xenakis and his like-minded peers challenged the fundamental principles of the art.

In his book, Formalized Music, Xenakis wrote, “… the collision of hail or rain with hard surfaces, or the song of cicadas in a summer field. These sonic events are made out of thousands of isolated sounds; this multitude of sounds, seen as totality, is a new sonic event.” In his composing, Xenakis used mathematical constructs including set theory, stochastic models, statistical mechanics and game theory. His ideas exerted a profound influence on developments in electronic music, which persists today.

The setting for the recital on a balmy, misty Saturday evening was suitably industrial-casual. Goodson Yard is a cavernous open warehouse space with a concrete floor, brick walls and a pitched wooden roof three stories above. The six percussion stations were arranged in a circle in the middle of the floor. Folding chairs for the audience were placed around the circle. The number of patrons exceeded the available seats, leaving a sizable group standing behind and between the seated audience and the weathered brick interior walls.

The anticipation was palpable, but the mood was relaxed. Following a brief introduction by Herron, the lights dimmed and the six musicians struck the first notes of Peaux, which is scored for skin drums.

Claviers, the second movement of Pléïades, showcases the xylophone and marimba in a whirling dervish display of rhythmic phasing interjected by jaggedly angular passages. In the expert, sympathetic hands of Chamber Cartel, the shimmering harmonic overtones produced during Claviers provided the most sonorously pleasurable measures of the evening’s recital.

Next came Metaux and the release of the sixxen. Like a mathematically constructed Indonesian gamelan, the sixxen sextet generated beautiful reverberations and mellifluous harmonics within a fairly rigid framework. Tinged with a distinctly metallic sound, the sixxen imparted a Medieval quality akin to a choir of Gothic church bells.

The final movement, Melanges, served its purpose with impressive panache, allowing full expression of the varied and individualistic characteristics of the percussion instruments while highlighting the masterfully intricate cohesiveness of Zenakis’ composition. Moving about their stations in a trance-like state from tympani to marimba, tom-tom to sixxen, the members of Chamber Cartel brought Pléïades to a ringing conclusion, which brought the audience to its feet for a rousing ovation.

Chamber Cartel will close out the 2015 season with a concert and fundraising party on Saturday, November 2, 7-11 p.m., at the Goat Farm Arts Center. The event will feature food and wine, a silent auction, and performances featuring the music of Philip Glass, Mischa Salkind-Pearl, Nickitas Demos, Marc Yeats and others.