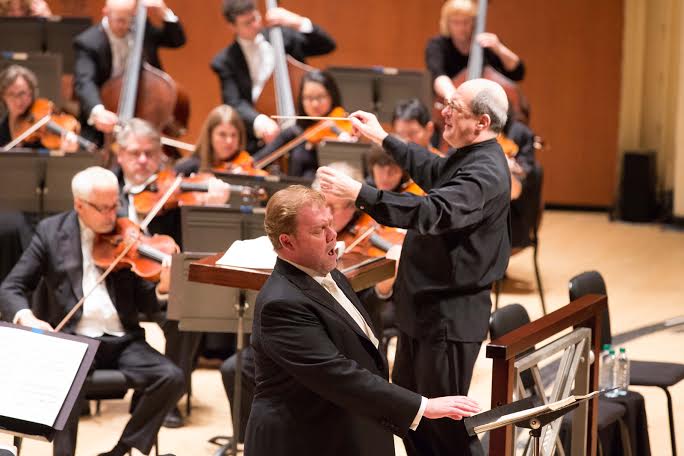 Review: In the season finale, the ASO and Chorus ring through on the opera “Samson et Dalila”

On Thursday, the Atlanta Symphony Orchestra performed a concert version of the opera Samson et Dalila by Camille Saint-Saëns. Music director Robert Spano led the combined orchestra, ASO Chorus and panoply of soloists in this unstaged concert performance to kick off the final week of the orchestra’s 2014-15 classical subscription series concerts.

The program will be repeated in its entirety on Saturday at 7:30 p.m. in Symphony Hall, the only remaining opportunity to hear the entire 120-minute, three-act opera.

This concert version constitutes the ASO’s first performance of Samson et Dalila. It was, however, hardly the first time the opera has been performed in Atlanta. In 1919, the Metropolitan Opera performed it at the city’s then 10-year-old Auditorium and Armory (later known as the Municipal Auditorium) in a production that starred the great tenor Enrico Caruso and mezzo-soprano Margarethe Arndt-Ober in the title roles, with the MET’s principal conductor at the time, Giorgio Polacco, on the podium.

The auditorium itself, which was located at the corner of Courtland and Gilmer Streets downtown, would later serve as the primary venue of the ASO until the current Symphony Hall was opened in 1968.

Thursday’s ASO performance paired heldentenor Stuart Skelton and mezzo-soprano Stephanie Blythe. Blythe’s most recent appearance in Atlanta was in recital at Spivey Hall in March of this year with pianist Warren Jones.

The Australian-born Skelton made his last appearance with the ASO in 2014, as Ahsha in the conceptually dubious and lyrically disturbing “Fire Angels,” giving a strong performance, along with soprano Jessica Rivera, in what was otherwise the genuine low point of that season’s repertoire.

Skelton’s performance as Samson on Thursday was even better, his bold voice capturing both the character’s strengths and the uncertainties brought on by his desire in the face of presumed love from the wily Dalila. Blythe was a good match for Skelton, both in voice and characterization of Dalila as the kind of femme fatale who would pour water on a drowning man.

The triad of principal characters was complete with stentorian bass-baritone Greer Grimsley as Dalila’s scheming co-conspirator, the High Priest of Dagon — a fertility god at the top of the Philistine pantheon.

Two other lynchpin characters were well-sung by bass Timothy J. Bruno as Abimélech, the satrap (governor) of Gaza, who gets killed off by Samson in Act I, and bass Nathan Stark as an old Hebrew man whose repeated advice against fooling around with Dalila was ultimately ignored by Samson.

Although the Atlanta Symphony Orchestra Chorus is far too large to function as an opera chorus by the standards of most staged “grand operas,” it is continuing to cut itself a viable niche in operatic choral repertoire. This convert proved a fine example.

Saint-Saëns had originally intended for Samson et Dalila to be an oratorio, but Ferdinand Lemaire convinced him that it should be an opera instead. The significant choral passages, in particular those of the opening act, show the composer’s original inclinations toward oratorio in their textures and often contrapuntal elements. Some could viably become a persistent, if occasional, part of the ASOC’s in-the-back-pocket concert repertoire. That was a happy, enlightening discovery.

Although the orchestra was mostly relegated to the role of underscoring the singers and drama, they did so beautifully, with subtlety and often evocative atmospheric color, never overwhelming the soloists, yet rising up with force when called upon.

The orchestra did have their own memorable featured moments, particularly in the heady and hedonistic “Bacchanal.” All in all, Samson et Dalila proved an engaging closer to what began as a difficult season.

Also of note, two long-time musicians of the ASO are retiring at the end of this week’s concerts: clarinetist William Rappaport, who has been with the orchestra for 40 years (since 1975) and second horn Thomas Witte, who has been a member for 42 years. Congratulations to both for their loyal and artistically astute service to the orchestra and the Atlanta community.