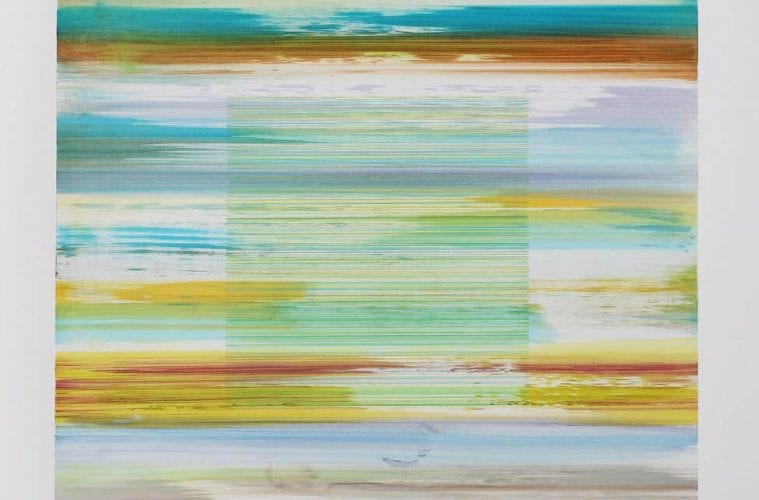 Yes Button, Scott Eakin’s show of new work at Marcia Wood Gallery, his first solo show at the venue, is as meticulously ordered as its title is fanciful. There is no eponymous button, nor even a curve or a rounded edge in sight. Rather, the eleven works — all polychromatic acrylic compositions on panel — are, all but one rectangle, square in three sizes of 36, 48 or 60 inches, including four works on paper at 23 inches.

Eakin works on a grid, yet the resulting effort registers as more bar-graph, the color spectrum decoded, rather than reticulated. Discrete ruler-shaped elements, which read mostly horizontal, comprise the integrated whole. The dominant sensation is a joyful experience of color in its limitless iterations, with a dizzying Hofmann-ian “push and pull” with which the artist creates a depth of foreground/background. Each increment possesses its own personality – from sheer lipsticky gloss to dense and opaque color – yet each contributes to the whole. While many are simple lines of delicious color, just as many take on the feel of miniature landscapes, of worlds within worlds.

There seems to be an attendant, though unstated, pleasure on the part of the artist of starting with a template and working things out as the elements accrue. Like most compositions that accrue from distinct, yet related, elements — a symphony, a stone wall, a knitted sweater, a house — the finished composition can bear little resemblance to its components. The sum is greater than its parts. So too, for Eakin’s compositions, and with good reason: the artist hails from a Midwestern family of farmers, builders, seamstresses, musicians — people, he writes in his statement, “who are deeply grounded in the material world.” Eakin establishes a plan of his own in “colors, tone, size and ‘construction’ of elements” in ways that for him are similar to the orderly work of “mowing a field . . . or improvising a melody over a chord progression.” The accumulation of these components creates a fractal-like image in which the artist finds comparisons in nature as when cells, crystals and other elemental forms proliferate and repeat to create complex organisms. In a lovely turn of phrase, he writes that his paintings are “a quotation of the complexity and beauty found in the material world.” Eakin’s color palette runs the spectrum from palest whites to deep chocolate and charcoal near-blacks. Some such as Butter Lemon and Sleepless Shimmering, both from 2017, have the clear strength of primary color, yellow in the former and blue in the latter. Others evoke fluorescent DayGlo colors from the delirious ’60s. Still others are muddier, in satisfying burnt oranges, olives and navy blues, and all have to be seen in person to be fully appreciated. To my eye, the most successful painting falls at the dark end of the spectrum. Witness Marks (2017), the only non-square in the show, possesses a handsomeness and gravitas that stands in contrast to the singular “white” painting at the other end of the spectrum. Cold Lake from 2016 has an unfinished gesso-like feel as if still awaiting its turn with the color. In fairness, however, this may owe to the fact that in the other works color is so dominant. It is worth noting that it has one of the only relatable titles (by which I mean that its title seems somehow to refer to something in the painting. Its surface looks icy and its colors cool). The other titles seem as fancifully ascribed as the show’s title, and vaguely narrative in a way that isn’t suggested in the work – New Cadillac Bongo Drum, In the Long Grass, As You Were.

Mathematicians, scientists and philosophers have long examined the probably unanswerable question of whether math is a discovery (of what exists in the natural world) or an explanation designed by the human brain as we explore its truths. I think it is both, and would bet good money that one or more of those laws, whether we describe them as construct or capital-T Truth, underlie the artist’s efforts. A balance in color, shape, line and sets that follows the principles of visual pleasure inherent in the Golden Mean, for example, “tells” him that the painting is complete.  Jackson Pollock is famously purported to have answered the question of how he knew when one of his abstract paintings was finished with a question of his own: “How do you know when you’re finished making love?”

These paintings reflect some of the same transformational, couldn’t-be-any-other-way, je ne sais quoi. Rather than disparate, chaotic or varied, all this color and shape adds up to a unifying jolt of summertime pleasure.