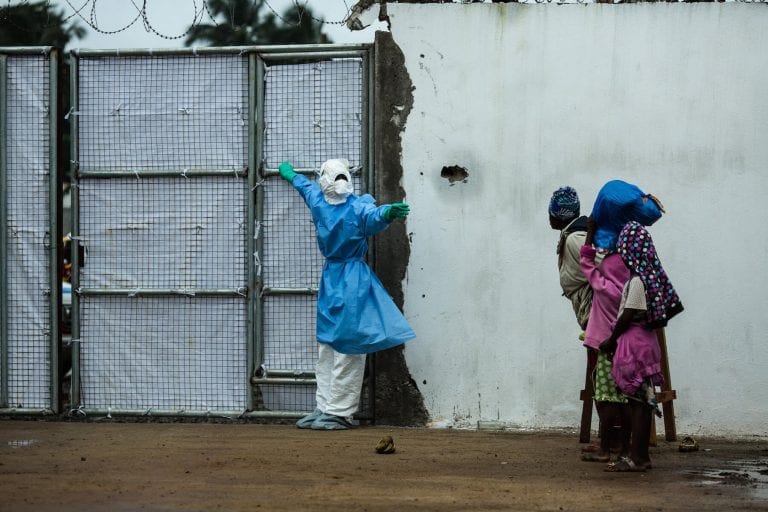 Monrovia, Liberia, September 22, 2014: A family waits at the entrance to Island Clinic. The facility was set up by the WHO and the Ministry of Health of the Republic of Liberia in response to the surge of patients needing an Ebola Treatment Unit (ETU).

Review: “EBOLA: People + Public Health + Political Will” articulates the prevention of an epidemic

At the peak of the Ebola epidemic in the fall of 2014, rumors that the deadly virus could spread uncontrollably were running wild. Atlanta itself was at the epicenter of a media frenzy, after two American health-care workers who had been treating patients in Liberia were admitted to Emory University Hospital that August. The epidemic incited fear, confusion and national insecurity.

Three short years later, however, Ebola seems vanquished. Although cases of the disease have surfaced in a few places — the latest one being in the Democratic Republic of Congo in 2017 — the spread of the disease has been mostly prevented. Now, world health organizations have come to reflect on their past actions and are able to ponder their “learned lessons.”

EBOLA: People + Public Health + Political Will currently on view at the CDC’s David J. Sencer Museum until May 25, 2018, is the first U.S. exhibit to offer the public an overarching view of the outbreak that killed more than 11,000 people in West Africa.

For the CDC and its international partners, fighting the Ebola virus was a massive undertaking. In all, 1,897 CDC staff members were deployed at one point or another to West Africa. It was “the largest response in CDC’s history,” says Louise Shaw, the curator of the show. “I knew it would be a big story and we started collecting at the beginning of the epidemic right from the beginning in 2013 to 2016.”

The exhibit aims to present what it was like “inside the outbreak” with features such as cultural artifacts, first-person audio testimonials, video documentaries and photographs.

It takes several visits to absorb the full extent of the informative data displayed, and the number of descriptive panels can sometimes be overwhelming. The exhibit succeeds in showing both the breadth and depth of what it takes for international health organizations to respond to such an outbreak and the scrupulous steps taken by individuals to fight the disease. The technological and experiential methods that were used to fight the disease could be meticulous, something the exhibit illustrates fully.

Sure, the display of one of the robotic extractors, which could process 96 suspected Ebola samples, is an impressive technological testament to the advancement of science, but the less scientifically inclined visitor will find equal awe in reading the contact tracing notes written on a manila folder by a CDC epidemiologist in Liberia or the whiteboard at the Western District Ebola Response Center that show the painstaking efforts it took the team of scientists in Sierra Leone to investigate and track Ebola transmission among friends, coworkers and family members.

Arresting photographs add to the strong visual narrative. Images taken by CDC staff deployed to West Africa cohabit with those of professional photojournalists who covered relentlessly the unfolding drama. The stories behind them alternate between terrifying moments, such as the one by John Moore of a health worker in full protective clothing carrying a tiny child suspected of having Ebola, and the more joyful imagery of CDC staffers enjoying peaceful moments in Sierra Leone.

Equally interesting is “Faith, Culture, Tradition,” a section that explores the sociological and cultural challenges that the CDC and its partners faced in their intervention in West Africa. “The stigma [associated with contracting the disease] was a big issue,” explains Louise Shaw. As the outbreak escalated, it was difficult to avoid contamination during burial rituals, where it is customary to touch and clean the corpses, “and that is how it went out of control.”

Three white crosses made to mark the graves of victims at the Liberian National Cemetery are on display below a poignant photo of a woman grieving at a site. The photo was taken in 2014, at a time when the death tolls were so high that the authorities could not keep up with the burials and decided to use cremation, which is against traditional burial practices. “All bodies were cremated — even when Ebola had not been confirmed as the cause of death,” reads the panel.

By the end of the tour, down one level, the exhibit touches succinctly on the time when Ebola became an epidemic of fear and a greater reality in the U.S. overall, with the death of a Liberian patient in Dallas, followed by the infection of two nurses. Overall, it stresses the CDC’s challenge of communicating effectively to the general public and discerning fact from fiction.

EBOLA: People + Public Health + Political Will is an invitation to reflect upon the idea that an epidemic is not just a threat to public health, but also a violent disruption to the cultural and social threads of a community, village or even a country.