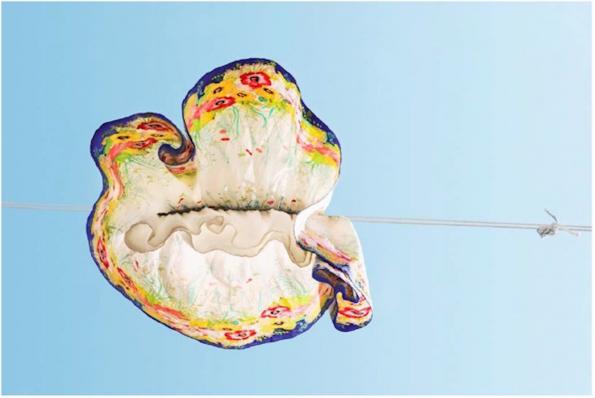 Review: Sally Gall’s “Aerial” is a disorienting feast of color

Sally Gall’s Aerial, at Jackson Fine Art through April 15, is a disorienting feast of seemingly abstract swirls of color that makes visual sense only gradually. The 11 vivid photographs of vertiginous movement remain almost as dizzying after the realization that these are photographs of clothing and sheets, hanging on clotheslines and caught by the wind. 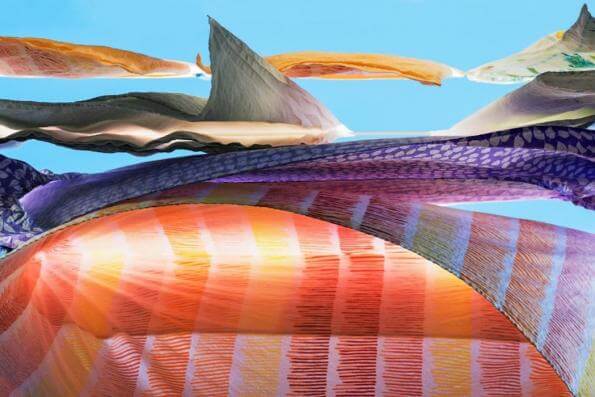 Gall has caught a wide range of visually stunning moments in her photographic net. The old concept of the decisive moment finds new expression in the momentary drama of a billowing skirt turned into a brilliantly colored flower, or a child’s crib sheet isolated against a bright blue sky as a visionary panorama of moons and stars suspended in the dark of night.

The visual metaphors that Gall exploits include the parallel lines of empty segments of clothesline resembling the staves of a musical score. Reinforcing the concept of the relation between geometry and physical reality, Gall presents one accidental composition of flapping sheets as an homage to the mix of types of geometric abstraction in Wassily Kandinsky’s paintings.

Gall’s selection of serendipitously juxtaposed shapes makes for an intriguing juxtaposition with the adjacent exhibition of David Stephenson’s Domes & Vaults, a photographic exploration of how Islamic and Christian artists and architects created the circular geometries of heaven in churches and temples over the course of centuries. The symbolism has varied, and the uses of geometry likewise, but Stephenson has chosen to present the examples that demonstrate an intriguing kinship beneath the diversity.