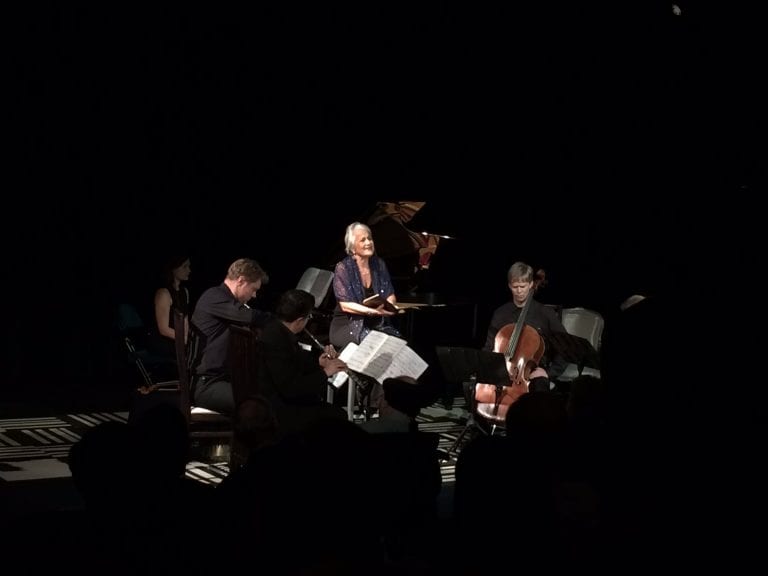 Sometimes the title of an art exhibition offers a hint of mystery or pays homage to a specific inspiration. ZuCot Gallery’s The Spring Palette Cleanse avoids those notions altogether and leaves little to the imagination: it’s a show that intends to wipe the slate clean after the heavier subject matter of winter’s Double Consciousness. On the surface, it succeeds. However, art and message never stray too far apart.

Lynn and Henderson’s paintings present familiar scenes of rural life and jazz musicians, respectively, while Riley-Webb and Mejia’s abstract works employ bold bursts that leap off the canvas. Hamilton’s vinyl record assemblages blend iconic images and music of well-known musicians — Billie Holiday, Miles Davis and Future, to name a few — into an accessible form, and give a sense of why his work has become popular among celebrities and contemporary collectors.

Charly Palmer’s “Battleship 1” and “Battleship 2” are the most compelling works in Cleanse; the paintings present a commentary on today’s African-American youth “battling their inner-selves and surroundings in search of identity, validation, and safe spaces.” These actions take the form of battleships — colorful, yet menacing crowns — atop the heads of a young boy and young girl. Prince also addresses the notion of battle; his linoleum cut prints present intricate, often dense, visual narratives that combine Christianity, civil rights and Greek mythology with varied depictions of the body in relation to space(s).

With The Spring Palette Cleanse, ZuCot Gallery invites viewers to enjoy the colors of the season superficially, while subtly engaging them to dig — and think — deeper.  –Floyd Hall

Carl Honoré lays out the heart of the Slow Movement in his book In Praise of Slowness like this: “Be fast when it makes sense to be fast, and be slow when slowness is called for. Seek to live at what musicians call the tempo giusto — the right speed.” Poem 88’s show EST ARS VITAE (Latin for “the art of life”), fits neatly with this concept of finding an appropriate tempo to maximize quality.  At the root of this exhibition is an invitation to slowly contemplate small natural forms in detail-saturated images.

Sean Abrahams’ black and white stippled “Inky Freakout 3” is the sort of drawing that I could look at forever. The psychedelic landscape has a push and pull of positive and negative space typical of optical illusions. Similarly playing with positive and negative space is Zuzka Vaclavik’s painting “HWY A1A.” The painting’s history of built-up texture achieved through a multitude of layers, underneath meticulously taped-off flat color. In a different way, Mike Goodlett achieves this contradiction of form in “untitled (sculpture).” It has the plush appearance of a soft textile work, cast in pastel toned Hydro-Stone plaster.

What makes all of the work in EST ARS VITAE so visually appealing, and why it feels so slow, is a result of marathon level of dedication to the image. At the opening, Vaclavik revealed that it took a year to finish the painting, working 30 hours a week on it. Hannah Adair estimated the total time spent on her three works at around 240 hours. Rejecting the cult of speed in favor of a felt circadian clock marked by seasons has paid off with dividends with beautifully fertile work. –Angela Bortone

Baking with Babcha is Cable Access 4’s latest foray into a Paula Deen-style show, featuring everyone’s favorite Ukranian grandmother, Babcha, preparing Eastern European favorites for an audience of dozens. Too bad Babcha is actually Dolly Biddle, a hometown girl from Stone Mountain whose show is about to be canceled, until an argument between Biddle and her rival (in the kitchen and life) Isobel is caught on camera, and the station orders a new series starring both women. With Babcha’s son Stephen and a disgruntled cameraman along for the ride, these two are cooking up more insults than food, much to the station owner’s delight. The script for The Kitchen Witches is packed with punchy one-liners, but Out of Box Theatre’s production, onstage through May 21, is disappointing.

Pat Bell plays Isobel “Busy Izzy” Lomax, a sharp woman who graduated from Le Cordon Bleu, as meek, instead of serious and sexy. Betty Mitchell is believable as Dolly, but stumbles over her lines and spends so much time carrying a bad Ukranian accent that she seems to forget that Isobel had a long-term affair with her husband. The stakes seem too low and the jokes are delivered without any fervor, making the tension between Biddle and Lomax seem like nothing more than a playground spat. The Kitchen Witches has all of the ingredients for side-splitting hilarity, but this production barely cobbles together in the end. —Kelundra Smith

The Atlanta Chamber Players performed at SCADshow’s downstairs black-box theater in Midtown on Tuesday, with guest artist soprano Lucy Shelton. The focus of the program was Shelton’s performance of Arnold Schoenberg’s “Pierrot Lunaire” (“Moonstruck Pierrot”), with texts by Albert Giroud. Premiered in 1912, it is a landmark work, so influential that it literally changed the face of new chamber music in the 20th century. The vocalist (traditionally a soprano) performs in Sprechstimme (”spoken voice”) style. The 72-year-old Shelton recorded both German and English versions of “Pierrot Lunaire” with the Da Capo Chamber Players on a disc released in 1992 on the Bridge label. Her thoroughly engaging performance on Tuesday was in German.

“Pierrot Lunaire” was a first for a couple of the musicians. Three of the players must double on other instruments, and it was the first time clarinetist Laura Ardan has performed on bass clarinet. It was also violinist David Coucheron’s first time performing on viola, which he quips is “not a career instrument” for him. Other musicians were Todd Skitch on flute and piccolo, cellist Brad Ritchie and pianist Elizabeth Pridgen. The first half included satisfying performances of Falla’s “Suite Populaire Espagnole” by violinist Helen Hwaya Kim and Poulenc’s Sonata for Oboe and Piano by oboist Elizabeth Koch Tiscione. At the end of the first half, Shelton set up the theme for “Pierrot” by performing a collection of “moon songs” by various composers from Stravinsky and Ives to Fauré and Stephen Foster. Pridgen was collaborative pianist for all three performers. —Mark Gresham