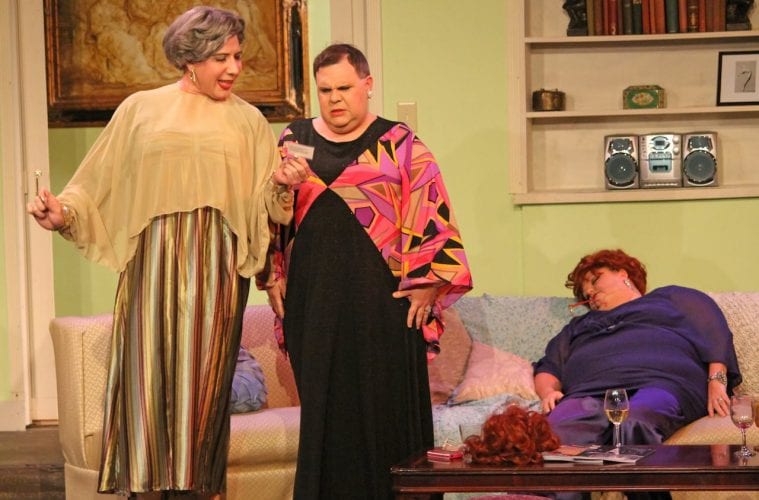 A drag queen who can flawlessly mimic almost any woman’s mannerisms and — with a little help from the right wig and a lot of make-up — her looks, as well, is hanging out in the fabulous apartment of an eccentric, hermetically isolated, wealthy, but heirless old widow when she suddenly drops dead of natural causes.

You can probably guess what happens next, especially since the drag queen (he prefers the more elevated term “tribute artist,” though, even as a drag queen, his career is floundering) is also hanging out with his pushy, loudmouth best friend, a second-rate New York real estate agent who can’t even look at a Greenwich Village brownstone without guesstimating how many dollar bills would pass hands at its sale. She believes that about $12 million could fall into their eager hands if only her friend can impersonate the widow long enough to arrange the quick sale of the uber-desirable property.

That’s the set-up for the delightfully silly new show The Tribute Artist, produced by the Process Theatre Company and running at OnStage Atlanta through May 15, and as you can probably further guess: the two friends follow through with that ludicrous plan, and complications (plus the proverbial hilarity) ensue.

Playwright Charles Busch may not be a household name, but he’s an accomplished playwright, whose zany 1984 satire Vampire Lesbians of Sodom became a monster underground hit in New York and subsequently everywhere else; you’d now be pretty hard-pressed to find a small theater in the United States that hasn’t produced one of his campy, likable shows at some point.

Busch, like the lead character of this play, is a “tribute artist” who worships classic Hollywood, and his plays — though they often have outrageous subjects —  are constructed with golden-age-of-Hollywood, air-tight precision, which is part of their enormous appeal. The comic riffs may occasionally be raunchy and the subject matter contemporary, but the basic tone, structure and driving instinct are old-fashioned. That’s the case here, and the complications and hilarity are of the genuinely funny and chaotic sort, especially as enacted by a talented Atlanta cast.

But one of the things the Atlanta premiere of the show reveals is that Busch, who starred in the original Off-Broadway 2014 production, obviously wrote the script to suit his own talents, to highlight the strengths of his co-star and to meet the expectations of his New York audience. The lead character is an aging drag queen with an intense devotion to the great female stars of the past. His devotion runs so deep that not only can he imitate their style and mannerisms at the drop of a hat, but he often has trouble parsing out their outsized personalities from his own, which developed entirely in their shadow. He often inadvertently finds himself mirroring their style or spouting their lines in real life, even when the situation calls for an authentic reaction.

Busch wrote the script to provide opportunities to show off his peculiar talents (and to poke fun at his own predilection) for imitating the stars of the past. Morgan’s Bette Davis is passably funny, but his Joan Crawford is just okay; his Vivien Leigh is kind of meh and his Marilyn misses the mark. This isn’t to criticize Morgan per se, but to point out that he’s wearing a gown that was clearly tailored for someone else. When Busch evokes a movie star, it’s camp, but also almost uncanny and surreal in its soul-deep accuracy.

One sees a parallel problem in the role of Rita, the comic loudmouth real estate agent, which Busch clearly wrote for his longtime co-star Julie Halston. Topher Payne does a nice job of capturing some of that character’s sense of dim self-awareness. His Rita has gradually realized that she rubs people the wrong way and vaguely worries about it, but she’s also clearly decided that she just doesn’t care enough to change.

There’s an admirable point of pride in her abrasiveness. But, nonetheless, there’s a sense that this is someone else’s role, and someone else’s play. Many of the jokes are designed to hit New Yorkers’ funny bone: Manhattan real estate jokes (ha ha?) and jokes about Midwestern newbies (“We’ve been here a month! We’re New Yorkers now!”) are pretty middling to begin with but fall completely flat in Atlanta.

Having a drag actor playing a non-drag role in a drag play is distracting, as are occasional bits of fourth-wall-busting, camped-up line readings complete with lighting changes and music cues. Realism isn’t the play’s mode (obviously) but a bit of naturalism is — i.e., the events of the play may be silly and implausible, but they unfold in a universe with natural laws like our own, and the people in that universe are unaware they’re in a play and so on. Such moments got laughs but seemed out of sync with the overarching strategy of the script.

The Tribute Artist doesn’t exactly have the loftiest of ambitions; it’s theatrical cotton candy, and unabashedly proud of it. The OnStage production certainly satisfies in that regard. My main criticism here is not that this is meaningless, mindless, campy comedic fluff (I’m actually all for it). But considering the talents of the people on stage and off, Atlanta audiences should be able to expect that their mindless campy comedic fluff be more made-to-order than ready-to-wear in the same way Busch tailored his play so effectively and incisively for himself, and for his audience.