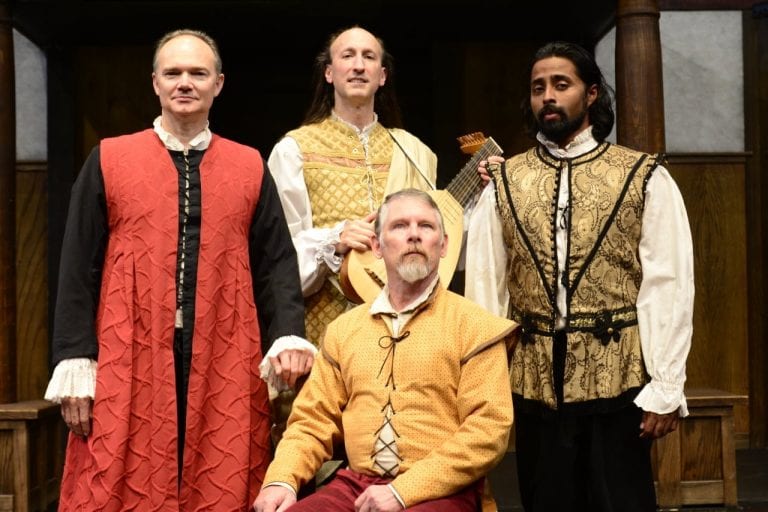 Adhering to tradition, the actors spent only one week in rehearsals. (Photo by Bryan Davis)

Review: Resurgens’ “Sejanus” is a fascinating step back into theater as it used to be

Tyranny is nothing new, nor is vicious political maneuvering a product of our time. Those seeking to absorb themselves in a different world by ducking into the theater to watch a 400-year-old show about ancient Rome may actually end up finding the action of Ben Jonson’s Sejanus a little too close for comfort. The rarely performed play is currently in production by the independent Resurgens Theatre Company at the Shakespeare Tavern Playhouse through November 18.

Resurgens is an Atlanta-based company that produces the plays of Shakespeare’s contemporaries, including works by Christopher Marlowe, Thomas Middleton and John Fletcher. This year, as Emory celebrates the exhibition of a copy of Shakespeare’s First Folio, Resurgens charts a different path by producing a season of Ben Jonson’s works in honor of the quadricentennial anniversary of the 1616 publication of Jonson’s own First Folio. The season began with original practice productions of The Alchemist in April and continued with Volpone in September and concludes now with Sejanus.

The full text has been streamlined from its approximately four-hour running time by director and performer Brent Griffin to clock in at a more digestible and accessible two hours, but otherwise the company follows many of the performative conventions of the Elizabethan stage: minimal set, direct addresses to the audience, live music, Renaissance costumes, performance without intermission, male actors in all the roles including the female ones, and universal lighting (the same warm, candlelight-like glow shines on both actors and audience).

The company also follows the convention of allowing just one week to rehearse the play. Such an intense week would be challenging under any circumstances, but this last one must have been a doozy. The occasional flubbed or forgotten line was a reminder of the immediacy and contingencies of the theater. One of the show’s loveliest and most compelling elements was traditional incidental music performed by actor Matthew Trautwein, also a musician, who plays period songs on the classical lute.

Sejanus His Fall, first performed at court in 1603, is a tragedy about the historical figure Lucius Aelius Seianus, the favorite of the Roman emperor Tiberius. The play’s ancient Roman setting and political subject recall Shakespeare’s 1599 Julius Caesar, which is presumed to have been an influence, but the character of Sejanus and his story have more in common with the scheming, maneuvering and jostling for political control of Richard III, whose story Shakespeare dramatized around 1592.

As the play opens, we learn that the court of Emperor Tiberius (Kyle Crew) has become corrupt, thick with spies and henchmen primarily controlled by Tiberius’ favorite, the loathsomely obsequious flatterer and manipulator Sejanus (Thom Gillott). After clashing with Tiberius’ son Drusus (Ty Autry), Sejanus sets out on a path of revenge, a scheme that fits in with his overarching ambitions but which sets off a chain of events that brings about his own sudden downfall.

Elizabethan drama isn’t particularly easy for modern audiences, and the rare and unfamiliar Sejanus is no exception. Part of the pleasure of the play is its Machiavellian maneuverings and labyrinthine machinations, which can make it hard to follow. Still, the general outline of the action is never elusive (Jonson gives us a big hint in the play’s full title), and the actors do a fine job with a challenging, rarely produced text. Especially well done are two of the play’s most dramatic and violent scenes: the public accusation and suicide of Silius (Stuart McDaniel) and the finely rendered ultimate denunciation and downfall of Sejanus, primarily orchestrated by Sertorius Macro (Brent Griffin).

In the end, the political world Jonson renders may simply be too different from our own to draw any direct parallels or to take the story as a simple allegory easily applied to today’s political scene. Still, viewers may nonetheless find within its dark, grim, schemingly violent world a message of dim hope. What Jonson makes perfectly clear is that, when it comes to those who grasp for and attain power, there is — and always has been — one inviolable rule: Here today, gone tomorrow.