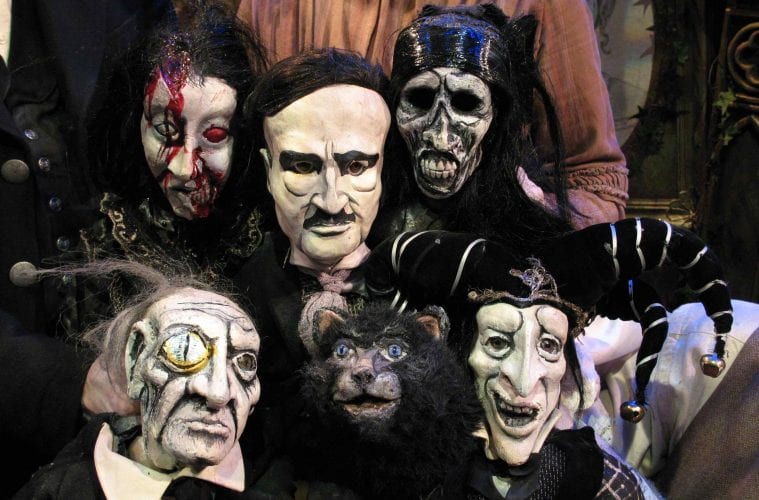 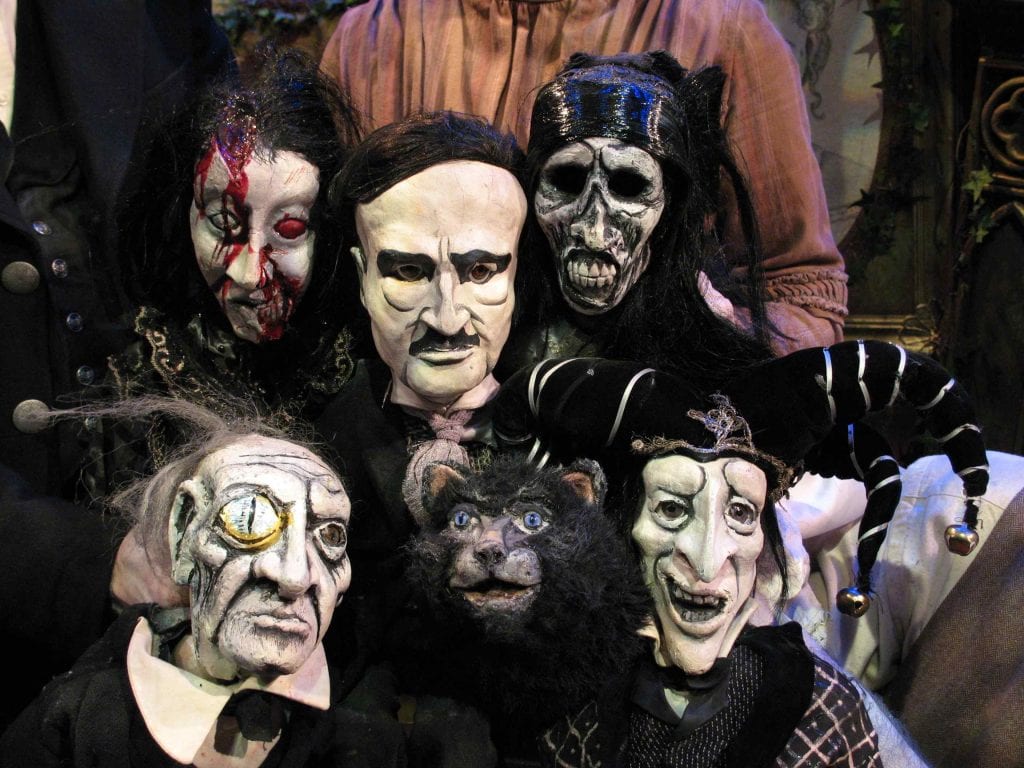 Poe surrounded by characters from his imagination. (Photo by Bill Jones)

“Misery is manifold,” the narrator of Edgar Allan Poe’s short story “Berenice” informs us at the beginning of that tale. It might just as easily be the first line of any of Poe’s horror stories, and in the Center for Puppetry Arts‘ revival of its production of “The Tales of Edgar Allan Poe,” on view through March 3, the line is delivered by a trippy chorus of three identical Poe puppets and hangs over the intercut stories that follow. With madness, death, guilt, obsession, cruelty, exhumation, murder, amorality, mutilation and more all brought to the stage, we see that, yeah, misery is pretty manifold. Point taken.

Six stories are told here, and we also hear two of Poe’s poems, “The Raven” and “The Bells.” The telling is done entirely by three visible actors, who also operate all the puppets. F. Elaine Williams’ set is appropriately grim and spooky, and it’s all given a solitary, mournful, haunting atmosphere by Atlanta musician and composer Klimchak. Using a simple series of bells and other mostly percussive instruments, he gives us the sounds of Poe: chiming bells, beating hearts, the flap of a raven’s wings.

Perhaps the most successful tale in this production is “The Cask of Amontillado.” This story of revenge is told through the use of two puppets, one for the victim, Fortunato, and one for the narrator. It’s not just the human capacity to do harm that fascinates Poe, but the human capacity to run headlong into it. The puppets bring to vivid life the drama of the coldly knowing narrator who ensnares Fortunato through his vanity. The sound of the little bells on Fortunato’s carnival costume, which are so memorably described in Poe’s story as the last sound before he is sealed into the wine cellar, become eerily dramatic when sounded onstage.

“The Oval Portrait” and “M.S. Found in a Bottle” aren’t as direct or fervent in their dramatic action, but the sense of the uncanny is effectively brought out through the use of evocative stage effects, as when a face appears behind a portrait or as the narrator of “Bottle” slowly climbs a swinging rope ladder leading to a mysterious ship. A Poe puppet takes on the part of the narrator in each tale, a weird literalization of an unspoken, often unrealized truth about his work: in some ways, Poe always seems to be narrating.

Edgar Allan Poe wasn’t exactly a ray of sunshine, and there are plenty of elements that justify the stated recommendation of the show as being for ages 12 and up. The puppets and effects for the decaying Berenice, the vulture eye of the old man, and the hanging of the black cat would have been enough to give me nightmares for months as a kid.

I attended a weekday matinee with groups of middle school children, and the atmosphere before the show was a noisy, rambunctious one of talking, laughing, shuffling, texting and coughing. I thought that watching the performance would unfold its own form of manifold misery. But the moment the first puppet appeared onstage and started obsessing about death and decay, there was an outrageously intense, concentrated silence that lasted pretty much throughout the 90-minute show. Children do love tales of mutilation and murder, I was reminded; they just have to be the right age.