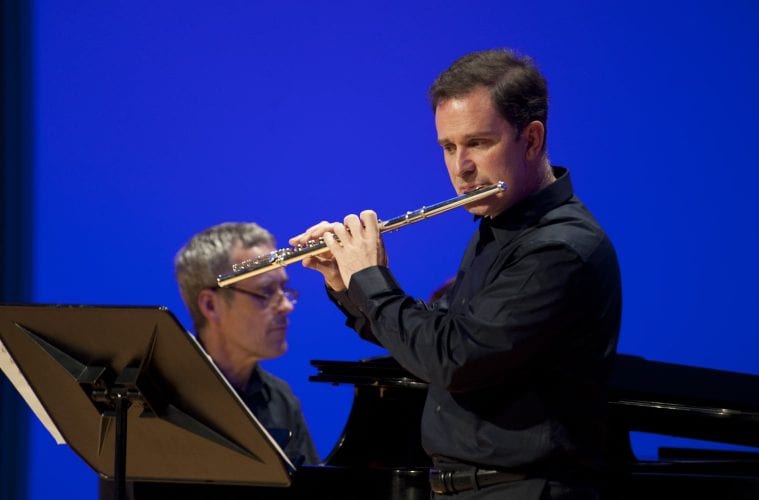 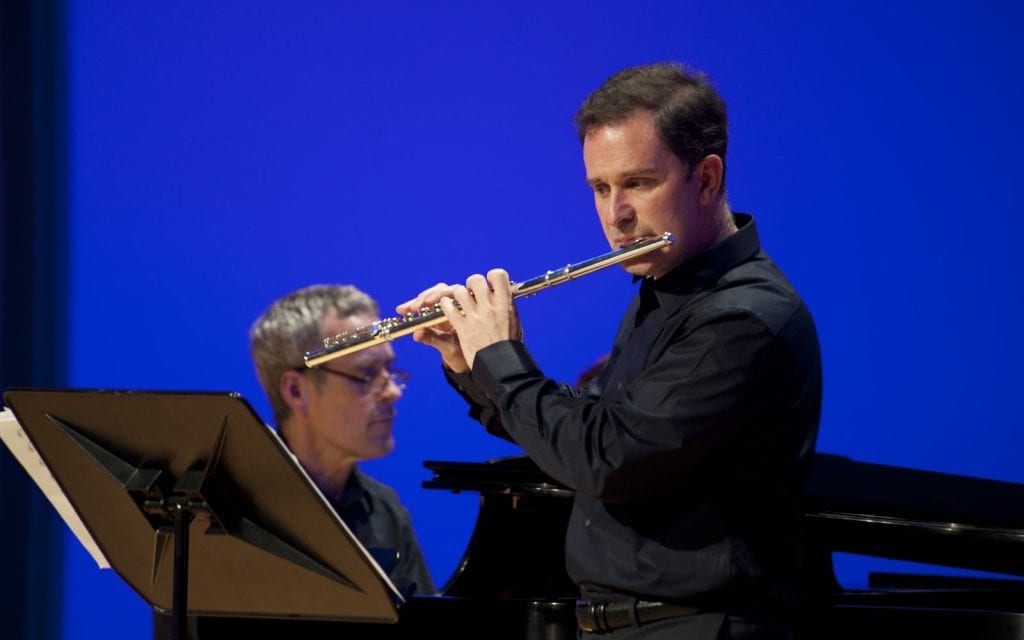 Peter Marshall (at the piano) and Robert Cronin at KSU’s Festival of New Music. (Photo by David Caselli)

Kennesaw State University’s 2013 Festival of New Music is in progress this week, running through tonight. Wednesday night’s concert at the Bailey Performance Center focused mostly upon KSU faculty performers, with works by three of the university’s composers included in the mix.

The concert opened with “Cloches d’adieu, et un sourire” (“Bells of farewell, and a smile”) for solo piano by Tristan Murail, performed with vibrant clarity by pianist Soohyun Yun. Written in memory of Olivier Messiaen, it’s the kind of piece that finds itself in university recitals more than in more public venues, but it would go over well performed in a visual arts space that focuses on a clean-lined modern aesthetic.

The festival’s guest ensemble, the remarkable, Brooklyn-based Sō Percussion, made a cameo appearance to perform David Lang’s “little eye” with cellist Charae Kreuger. Lang titled the piece after the road game “I spy with my little eye,” used to keep children from being bored on long trips. “It is not the most exciting way to pass the time,” Lang writes. “Eventually, however, time does pass.” And so it is with this music — not bad, but not one of Lang’s more remarkable works. Kreuger had the prominent part: a long if narrowly winding stream of notes played sul tasto, which actually made it more interesting.

“Pneuma,” by Atlanta composer and DJ Jennifer Mitchell, was next, performed by trombonist Tom Gibson with Marc Miller on upright bass and Justin Chesarek on vibes. The first three movements were remarkably similar in vibes and bass, forging a rhythmic undercurrent to mostly long tones in the trombone part. The fourth movement contrasted by including clapping and shifts in focus among players. Though he possesses a bright, bold sound, this was not Gibson’s best night, with rough articulation issues and a couple of notes that just got trapped in the instrument.

After hearing some of his well-received string quartet music the night before at Eddie’s Attic, the opportunity to hear Robert Cronin’s “Sonata for Flute and Piano” became a major motivation to attend this concert. In his own words, this was Cronin’s attempt to “write a sonata that would be comparable to the great flute sonatas, like Poulenc and Prokofiev, but in my voice.” He performed the work himself with pianist Peter Marshall.

There are many bright, engaging moments in this 21-minute piece, increasing in number as it goes along, but others felt meandering in detail. The latter was a truly unanticipated personal response, and Cronin’s sense of craft is observable, as it is in his strong, shorter work for flute and piano from 2001, “Off the Wall.” So, for me, the jury is still out on this substantive sonata until at least a subsequent hearing under different circumstances.

This was the second time I’ve heard Laurence Sherr‘s “EIMI” performed in a local concert of new music. The first was by Terminus Ensemble in December, in that instance involving flute, viola Sam Skelton on tenor saxophone, violinist Helen Hwaya Kim, percussionist John Lawless and Benjamin Wadsworth on piano. Written in 2006, “EIMI” (which stands for “Ensemble Intégrale Mittersill Improvisation”) is essentially a guided improvisation. Skelton’s sax dominated the work, largely sounding as if lifted from a black-and-white film noir depiction of a vacant rainy city street, with a strong foil coming from Kim’s violin.

Although composer Robert Ward, born in 1917, is still very much alive at age 96, it was odd that his “Sacred Songs for Pantheists” was included in this festival of “new music,” performed by soprano Carolyn Dorff and pianist Judith Cole. Despite the wrong dates in the program booklet, these songs were composed in 1951 and premiered the same year by soprano Carolyn Raney, a full decade before Ward’s Pulitzer-winning opera, “The Crucible,” hit the stage. Face it, these songs are over 60 years old — hardly “new.”

If the point is simply that Ward is an older, established composer of vocal music who is still alive, one could have as easily programmed his last composition for solo soprano, “In Praise of Science,” written in 2008, still in the voice-friendly conservative style of his earlier songs. Although written for voice with brass ensemble, it could work reasonably well with piano. And if not that, there are plenty of other vocal works from this century that are not part of the “squeak and splatter” school, if that’s a worry.

But if you are into that aesthetic, the pre-recorded tracks of “alt.music.ballistix,” for solo clarinet and CD by Nikola Resonovic, would have fit the bill. Written in 1995 and named in the manner of a fictitious Usenet news group, the pre-recorded audio makes uses of now-archaic noises that were part of online technology of the day: scrappy modem signals, land-line telephone dial tones and artificial-voice error messages such as “login incorrect; please contact administrator for help.”

Clarinetist John Warren did a bang-up job with his part, from the lyrical opening lines to the whirling Balkan folk-dance rhythms that populate the middle section. What didn’t work were some flickering lighting effects, which were more annoying than contributing.

The final work on the program was “Vignettes” for trumpet and percussion by James Stephenson, ably performed by trumpeter Douglas Lindsey and percussionist John Lawless. Except for adding a mute in the second and using a smaller trumpet in the third, these three brief works were of essentially similar form: a technically challenging rapid opening followed by a slower section, then a rapid section again.

After those performers left the stage, the audience sat for several moments, expecting something else to happen, then rose and started leaving when the stage remained vacant and silent. “I guess nobody wanted to say goodbye,” said one person who passed me in the aisle. It could have been that those involved in the festival were already quite tired. “I’ve been here since 8 o’clock this morning,” said composer Mitchell, “and won’t get home until 11.” And there were two days of the festival left to go.