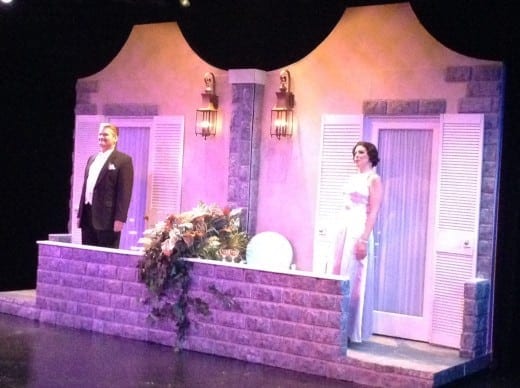 Review: Noël Coward’s “Private Lives” is a soufflé of a play that stands the test of time and love

He was a prolific, celebrated playwright (and composer) who churned out work for 50 years. Yet not much that Noël Coward wrote was as frothy and beloved as his sparkling Private Lives. Dunwoody-based Stage Door Players is currently mounting the classic, running through February 8, with artistic director Robert Egizio directing and two exemplary performers fleshing out the lead roles. Those two, ironically, happen to be husband and wife in real life — Tess Malis Kincaid and Mark Kincaid.

Written in 1930, Private Lives can still amuse. It’s a comedy of manners filled with repartee and sly observation. Amanda Prynne (Tess Malis Kincaid) and Elyot Chase (Mark Kincaid) were married for three stormy years but have been divorced five. Now they are vacationing and honeymooning in France with their new mates. Elyot has taken up with young Sybil (Rachel Garner) and Amanda is with dapper Victor (Joe Sykes). Both of the new spouses seem rather curious about the exes, whom they seem to know a lot about. When Amanda and Elyot realize they are next door to each other at a hotel, they both want to leave quickly. It’s not long, however, before they have reunited, sharing cocktails and cigarettes over the terrace. Soon the give-and-take volleying is back and they can’t live without each other — again. It’s back to Amanda‘s flat for the duo, but what they don’t count on is Sybil and Victor chasing after them.

Private Lives is one of those productions that actors crave — the period piece is witty, sophisticated and full of sharp dialogue and characters. The back-and-forth relationship between Elyot and Amanda is amusing: they hate each other, love each other and can’t stop bickering. The two go at each other frequently and it’s not just with verbal daggers; these here can be physical. The Kincaids work together with a shorthand that is terrific to watch. Both act all over town and are pros whose characters are believably in and out of love. They are also blessed with comic timing; the one-liners hurl off their tongues with precision.

Yet the two are just as effective observing and watching. Tess’s finest moment might just be the way she silently sits and watches Sybil and Victor argue near the end, recognizing that these two might be younger versions of her and Elyot.

The supporting characters in this piece, no matter how richly drawn, can feel a little like accessories. Fortunately Sykes is suited for the material and plays off the others admirably, charisma fully intact. While Garner has some pleasant early moments, she tends to overact, especially in her crying scenes and while reacting to the others. (The fifth performer is Dina Shadwell, who has a few choice scenes as a maid startled by the mess Elyot and Amanda have made.)

Stage Door Players has produced some particularly memorable theater of late, including the musical Godspell and the drama Rabbit Hole last fall. Private Lives isn’t quite at the level of those shows. It succeeds — Jane Kroessig’s era-appropriate costumes and Chuck Welcome’s set that changes nimbly from a hotel terrace to Amanda’s Paris flat are noteworthy — but as crisp as the play can be, and as agreeably acted, this version can feel a little sluggish at times. The needed pacing isn’t always there; Egizio doesn’t give the antics the snap to move forward the way it needs to.

Nonetheless, Noël Coward’s soufflé of a comedy is in caring hands here. This version is not perfect, but it’s often funny, especially with its double dose of Kincaids.