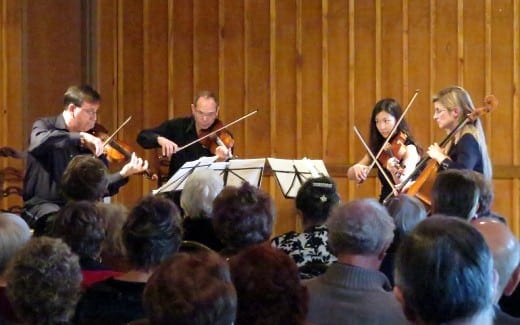 The Peachtree String Quartet plays a winter concert in its home venue in Garden Hills. (Photo by Mark Gresham)

The show opened with Franz Joseph Haydn’s String Quartet in D major Op. 76 No. 5. Written in 1797, it is one of the so-called “Erdödy” quartets, named for the Hungarian patron Count Joszéf Erdödy, who commissioned them. They were the last complete set of string quartets composed by Haydn. The centerpiece of the work is its second movement, marked “Largo. Cantabile e mesto,” which has a duration that’s not quite half of the entire.

Despite a few scattered but noticeable intonation issues early on, the opening movement was playful and the prominent “mesto” slow movement not without its sweet moments. The final two movements were briefer than one might expect. An attractive minuet followed by a spunky finale spanned around three or four minutes apiece.

It was followed by the String Quartet No. 7 in F-sharp minor, Op. 108 by Dmitri Shostakovich. At only 13 minutes duration, it is the shortest of Shostakovich’s 15 string quartets. Its three movements are performed without any break between them.

The lean-textured first movement, opening with a paroxysmal, dance-like tune, led directly to an almost frail, slow middle movement with an eerie melodic character. By contrast, the final movement broke out with a forceful statement on muted instruments leading to an impulsively caustic contrapuntal passage. From there, the music wound down to recall material from the first two movements. It concluded with an unexpected, melancholy waltz.

After intermission, Antonin Dvořák’s half-hour-long String Quartet No. 10 in E-flat major, Op. 51, rounded out the program. Its Slavonic mood was set in the opening movement, impelled by folk-dance rhythms. A dumka with a central furiant section came next, followed by a slow, rich-textured romanza. The finale brought back the folk-dance rhythms with a skočná, a reel-like dance in duple meter, which the PSQ musicians rendered with fittingly vibrant spirit to close the concert.

However, it was a concert that almost never happened. All members of Peachtree String Quartet are also members of the Atlanta Symphony Orchestra. When the quartet presented its first concert this season on September 7 in Duluth, it had been less than 24 hours after the musicians of the ASO were locked out by the Woodruff Arts Center management over the orchestra’s collective bargaining contract negotiations.

One week later, the PSQ repeated that same program at their Garden Hills home venue. The lockout was in full swing with no foreseeable end in sight. There was considerable doubt that the lockout would end by the new calendar year, thus great uncertainty as to whether the quartet’s musicians would still be obliged to travel long distances to obtain work.

At the same time, Pulgram, who is also the quartet’s artistic director, had just begun a year-long sabbatical from his job as one of the ASO’s first violinists. His plans were to travel for the year but were intentionally flexible. As a result of both circumstances, the quartet had planned no winter concert. Once the lockout concluded in mid-November and Pulgram found his own evolving itinerary would bring him back to Atlanta for the December holidays and part of January, the PSQ quickly developed a plan for presenting Sunday’s concert.

In a phone conversation with ArtsATL, Pulgram readily acknowledged one additional, vital factor in deciding to present the concert: “I missed the music. I missed performing with my colleagues.” That could also be said of the loyal following Peachtree String Quartet has developed over the few years of its existence. A majority of faces in the crowd have become recognizable as regular attendees.

The primary quandary now is that the Garden Hills Recreation Center has no room for expanding that audience. Attendance on Sunday was at capacity. It was not the first time. But Pulgram is adamant about not abandoning the quartet’s beloved home venue. Frankly, it’s not a bad problem to have, though exactly how Peachtree String Quartet will address it remains to be seen.